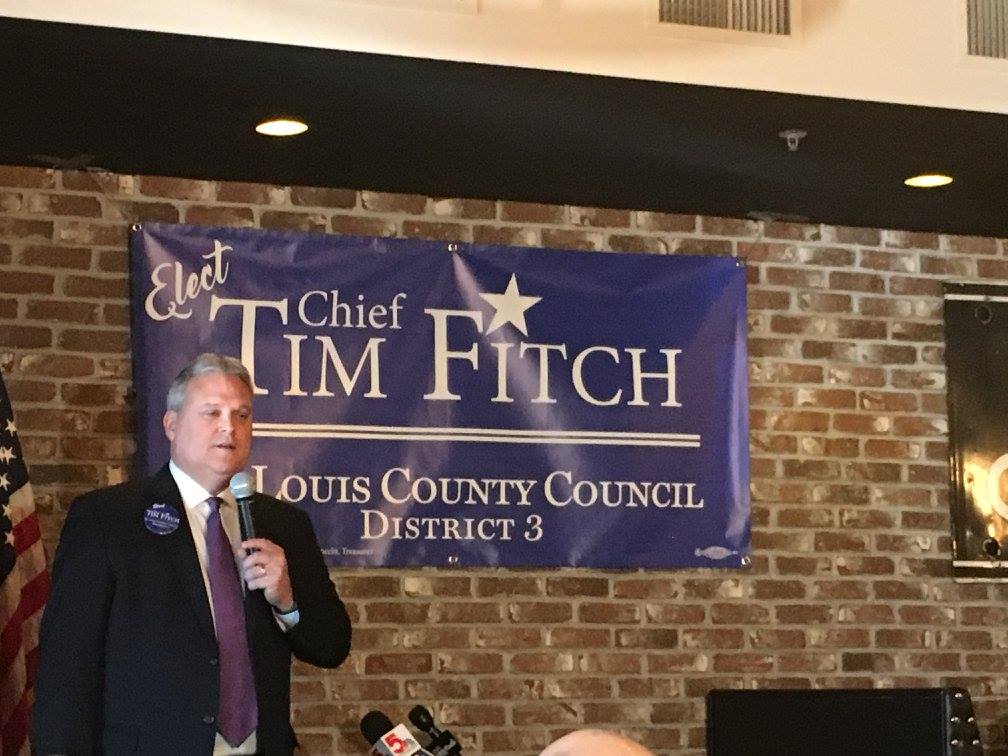 Speaking to a crowd at Twisted Tree restaurant on Watson Road, Fitch, 56, explained that he wouldn’t be seeking campaign contributions and that he and his wife would be funding the campaign themselves.

According to Fitch, he wants voters to know that he is completely independent and not reliant to special interests within the county. 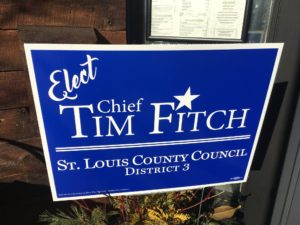 “My wife and I decided the only way we would do this is if I did not take campaign contributions. How many times have you been invited to a political event where somebody wasn’t in your pocket? We’re not going to get in your pocket,” Fitch said. “If I’m elected and have to make decisions for this county, for this district, rest assured I won’t be making these decisions based on people giving me money. It’ll be for the voters. It’ll be for what the people want me to do for the district.”

Fitch said being a police officer for 31 years within the county made him familiar with how both county government and County Council works.

He stated he might be able to help resolve some of the disputes within county government and has known County Executive Steve Stenger and most of the council members for years.

Some of the issues that Fitch said he will raise within his campaign will revolve around public safety, and to ensure that Proposition P funds are spent for public safety and not spent elsewhere.

According to Fitch, as the ordinance stands today, it allows public officials to create their own definition of public safety, whether it means the funds going to police, or instead fixing potholes within a city.

Currently, the position is held by Councilmember Colleen Wasinger, but recently Wasinger decided not to seek re-election and will look for other methods to serve the community.

According to Wasinger, Fitch would make a fine council member and one that would be worthy of taking her position.

“I know Tim Fitch from when he was the chief of police while I was a sitting member of the council,” Wasinger said. “I think Tim is a very fine, and confident individual. He’s certainly represented the police department well and I think he’s got a unique perspective, certainly to bring to the council with his policing background.”

Fitch said he has spoken to Wasinger and she has given him advice when it came to running a campaign, along with how the whole process worked.

Fitch also said he wasn’t considering running for any political position until the riots in Ferguson took place and was inspired by a tweet from former St. Louis Alderman Antonio French.

“I have never considered running for political office until the riots in Ferguson,” he said. “During that time period, there was an alderman in the city of St. Louis by the name of Antonio French (and) he (tweets) out one night during the burning and looting that if you don’t feel your voice is being heard, step-up, run for office. I gave it really no more thought (on running) until I started hearing that Colleen Wasinger was not going to run again.”

In addition, Fitch stated in an interview earlier this month that he doesn’t need to battle with anyone on the County Council, but he was willing to stand up to anyone be it St. Louis County Executive Steve Stenger or other council members if they weren’t looking out for the best interest of St. Louis County residents.