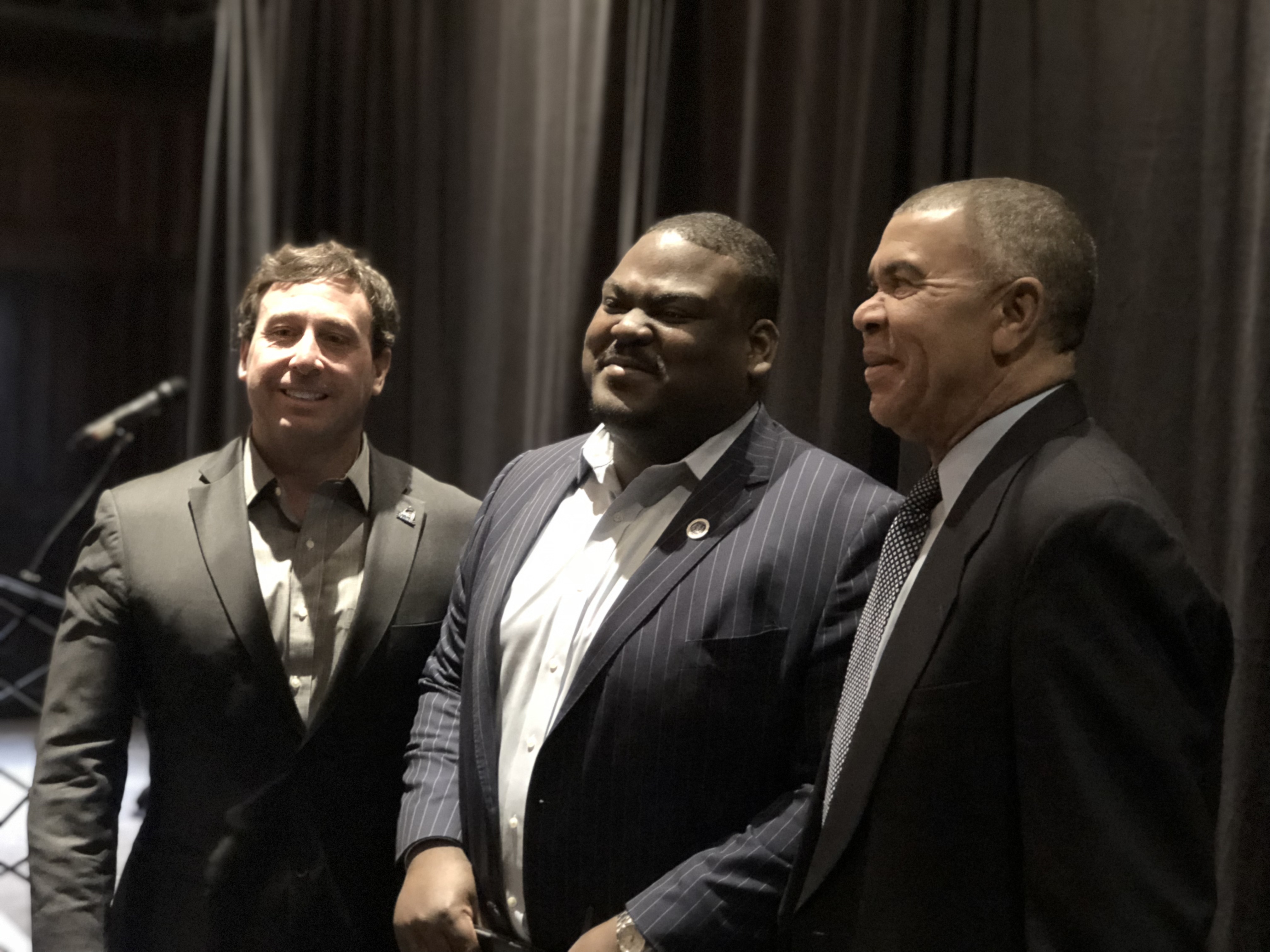 Lt. Col. Troy Doyle, John Bowman, St. Louis County Executive Steve Stenger and 1st District Congressman Lacy Clay all spoke on behalf of the organization and the change in leadership – sharing their excitement for what is to come.

“I am pleased to stand shoulder to shoulder with the new leadership of the St. Louis County NAACP Branch because they’ve always stood on the right side of history and they have always stood with me,” Clay said. “Historically, the NAACP has been a vital instrument to advance civil rights, voting rights, equal opportunity, criminal justice reform and economic justice. I congratulate the new leadership team of the St. Louis County branch, and I stand ready to push forward with them as we demand real equality and end voter suppression. ”

Doyle said that he is excited for the opportunity to serve with Gaskin in restoring the criminal justice community.

“It’s a pleasure to stand with the new leadership of this organization. I say this not only has the County Executive, but I say this as a lifetime member myself,” Stenger said. “I’ve heard some of the ideas that are being presented and promoted. Bringing in young people, bringing in the next generation and the current generation and working together for change is something that we desperately need in this county. It’s something that we desperately need in this country.”

Bowman said that he is looking forward to working with the great leadership of the organization.

“Before we prepare to bring you the new leadership,” Keith Antone Willis Sr. said. “ We must honor the old leadership, the Honorable Esther Haywood.”

Haywood served the NAACP for 50 years. For 20 of those years, she was on the Leadership Panel. Haywood was also President of St. Louis County NAACP. She has received national recognition for her commitment to youth and she is especially proud of the membership increase of the programming initiatives.

“John you’ve got some big shoes to fill,” Willis said. “But I’m sure he’s capable and ready.”

Gaskin serves at the Regional Outreach Manager for Diversity and Inclusion at the St. Louis Economic Development Partnership. There, his role is focused on the engagement of entrepreneurs and other stakeholders in historically underrepresented communities.

At the age of 26, Gaskin is the youngest member of the NAACP National Board of Directors. He serves on the finance, audit, Image Awards and Advocacy and Policy committees.

For the past 8 years, Gaskin has served as the youngest Freedom Fund Dinner Chairman in the country. He grew the St. Louis County NAACP Branch’s Dinner to the third largest in the nation, drawing national speakers and honorees like CNN’s Wolf Blitzer, Congressman Emanuel Cleaver, Congresswoman Maxine Waters and U.S. Senator Kamala Harris.

Gaskin became a national spokesperson for the NAACP during the civil unrest in Ferguson. He was featured regularly on national and international news outlets MSNBC, ABC, Fox News, BBC, The New York Times, Wall Street Journal and more. His editorials on race relations and economic equity have been featured in the Chicago Sun and Black Enterprise Magazine among others. He still appears as a commentator for CNN’s Situation Room, hosted by Blitzer, and is a frequent contributor on KMOX’s Reardon Round Table.

Gaskin received his bachelor of science degree in political science from Benedictine College in Atchison, Ks. He is a Ladue Horton Watkins High School alum. During his time in high school, Gaskin served as the first African-American commencement speaker in the school’s 85-year history.

Gaskin said that it was through Haywood’s leadership and his parents that he got involved with NAACP at the age of 9.

“Learning at the feet of trailblazers and strong women, such as the late Ina Boon and Esther Haywood,” Gaskin said. “I learned invaluable lessons about leadership, organizing, fundraising and coalition building. It’s a unique situation this branch will be headed by someone raised and trained within this organization.”

Boon was a Regional Director for the Midwest Region IV. After retiring, she became President of the St. Louis County NAACP. Gaskin said that Boon was a mentor to him.

Gaskin said that he hopes that his young age will send a message that the NAACP, both locally and nationally, is more relevant than ever before.

He announced that he has five areas that he immediately wants to focus on as the organization’s members work to address the dire social justice and civil rights needs of the region.

“This is important,” Gaskin said. “In order to retain the region’s top talent we must work on their behalf to ensure that there are opportunities – it’s common sense. If we want amazing, local talent we have to nurture it and gift it within. And work more collectively with the members of the St. Louis County NAACP.”

Gaskin said that it is the hope of NAACP that by working with groups, like the St. Louis County government, LaunchCode, Harris-Stowe University, Washington University, St. Louis Community College and the Missouri Restaurant Association, they will foster their goal of addressing a serious region-wide workforce diversity issue.

“We can all agree that the discrimination and injustice know no geographical boundaries,” Gaskin said. “We stand committed to working alongside any organization, Congressman Clay, the County Executive, Mayor Krewson or any elected or entities within St. Louis County and the St. Louis City NAACP as well.”