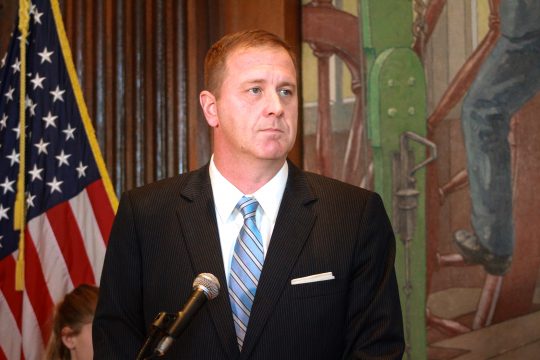 On Thursday, Eric Schmitt, who is currently serving the state as state treasurer, announced that Todd Graves, Jerry Hunter, John Ashcroft, and John Danforth will all be apart of his transition team.

The transition team will consist of Graves and Hunter as chairmen, Ashcroft and Danforth as honorary co-chairs, and a multitude of state law enforcement, attorneys, and businessperson as advisers.

“Incoming Attorney General Schmitt has established a well-qualified team with strong experience within the legal and law enforcement community to ensure a successful transition,” said Hunter. ”I am honored to assist with this effort.”

Schmitt was appointed by Gov. Mike Parson to fill the vacancy that will arise when current-Attorney General Josh Hawley resigns his post to serve in the U.S. Senate in January.

“As the state’s next Attorney General, I look forward to serving as the lawyer for all six million Missourians,” said Schmitt. “I am grateful to the exceptional group of leaders who are assisting with this transition and are committed to protecting Missouri’s families.”

A press release noted that the transition team will focus on reviewing the Attorney General’s Office and gathering information relevant to Schmitt’s top priorities as Attorney General.

Todd Graves is a partner with the law firm of Graves Garrett. Before forming Graves Garrett, Graves served as the United States Attorney for the Western District of Missouri. Graves was appointed United States Attorney from his position as Platte County Prosecuting Attorney. Graves has served as the Missouri Republican Party chairman for the past two years. His term ends this year.

Jerry Hunter is a partner with the law firm of Bryan Cave Leighton Paisner. Hunter previously was general counsel of the National Labor Relations Board in Washington, D.C., and served as the director of the Missouri Department of Labor and Industrial Relations.