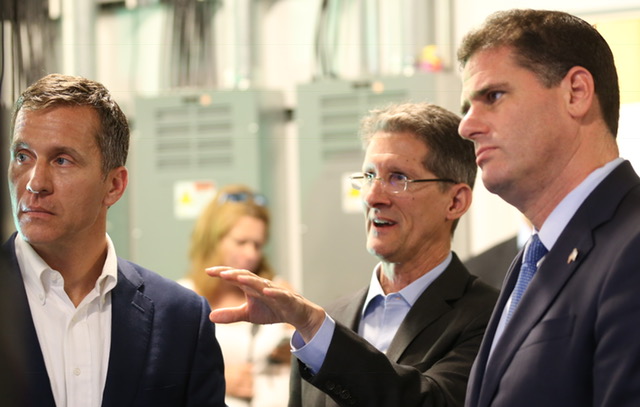 Gov. Eric Greitens and Israeli Ambassador to the U.S. Ron Dermer visited the Danforth Plant Science Center in Creve Coeur today for a business roundtable, and then took time with the press to discuss the unrest in Charlottesville, Va.

“It’s a real honor to have Ambassador Bermer here in Missouri, we have a fantastic foundation of economic partnerships, research partnerships, military cooperation, and we’re looking forward to building on those partnerships with Israel and leading to creating more jobs and higher pay for the people in the state of Missouri,” Greitens said.

He talked about three areas in particular where potential growth and partnerships with Israel are on the horizon.

“A second part of great cooperation is in healthcare, lots of great work that’s happening in healthcare in Israel, especially healthcare technology; here in Missouri, as you know, we have some fantastic healthcare facilities, we’ve got Mercy’s telemedicine center here, Siteman Cancer Center, just to name a few.”

“Those are just three areas of cooperation we’re looking at and we’re excited to bring the business community together to do that,” he said.

At the start of the business meeting, though, Greitens took time to address anti-Semitism and neo-Nazism.

He referenced how our state reacted when hundreds of gravestones were toppled at a Jewish cemetery in University City earlier this year.

“We had thousands of people who actually came together in the face of a terrible act,” he said, calling the cooperative effort to clean up the cemetery “a beautiful act of service.”

Greitens and Dermer toured several lab areas and ongoing experimental science technologies in the center before traveling to Jefferson City for a dinner at the Governor’s mansion.