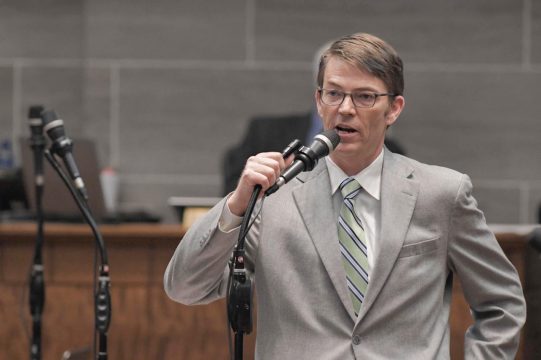 With the last permanent MHD director retiring in Dec. 2016, it was imperative for the administration to find a director who understands the challenges and is willing to meet them.

Producing a successful MO HealthNet program for Missourians is a top priority for this administration, and Governor Mike Parson believes Speaker Richardson’s background makes him the right choice for taking on this role.

“Missouri is incredibly fortunate that one of its most respected policymakers has chosen to continue his service to our state by tackling one of the most important challenges our state faces,” Parson said. “Providing accessible, quality health care to our citizens is crucial to further grow our workforce development. Speaker Richardson built his reputation during his time as a legislator on his personal integrity, strong management practices, and ability to bridge the partisan, ideological, and rural-urban divides to bring people together to solve our most difficult problems. From his time in the House, I know that Speaker Richardson will continue to listen to the concerns of Missouri citizens and help modernize and transform a program that will help our state.”

“Medicaid is the state’s most expensive program,” Representative Scott Fitzpatrick said. “Making up more than a third of the entire state budget. As Budget Chairman, I see firsthand the challenges Medicaid poses to the future of Missouri’s budget. MO HealthNet needs an inspired leader who understands each challenging aspect of the program and won’t shrink in the face of immense pressure to maintain the status quo. I’ve been fortunate to serve alongside Speaker Richardson for six years, and I firmly believe no one is better equipped to reform the program while protecting the interests of taxpayers at the same time. I want to commend and congratulate Governor Parson on this incredibly important appointment.”

“Putting Medicaid on a path of sustainability is a daunting task, as is driving quality healthcare at an affordable price for Missouri taxpayers,” Corsi said. “Under Speaker Richardson’s guidance, I am confident MO HealthNet will be transformed through modernization and innovation. He has a proven record of leadership, and his direction of MO HealthNet will serve Missouri well.”

Todd Richardson was elected to the Missouri House of Representatives in 2010. He served as Speaker of the House, Majority Leader, and the Chairman of the Emerging Issues in Healthcare Committee.

“Todd is a proven leader that physicians, hospitals, and patients can trust to lead the charge in reforming Missouri’s Medicaid program,” Dr. James Kelly, MD Physician Anesthesiologist, St. Luke’s Hospital in Kansas City said. “He has a remarkable ability to engage stakeholders and listen, as his passion for innovation in healthcare policy is truly inspiring.”

During his legislative tenure, Richardson was instrumental in the passage of numerous healthcare and budget reforms, including comprehensive reforms to Missouri Workers’ Compensation law and Second Injury Fund and passage of medical malpractice caps to stabilize insurance premiums. He was the author a 2014 voter-approved constitutional amendment to strengthen taxpayer protections in Missouri’s budgeting process. As Speaker, Richardson also helped pass reforms to Missouri’s Medicaid eligibility process and expanded healthcare access through telemedicine.

“In his tenure as Speaker of the Missouri House,” Representative Kip Kendrick said. “I have respected Todd Richardson for his integrity and his willingness to work across the aisle. As he becomes Missouri’s new Director of MO HealthNet, I look forward to working with him in that same spirit of bipartisanship and dedication to improving access to health care for all Missourians.”

Richardson received his Bachelor of Arts in Political Communication and his Juris Doctor degree from the University of Memphis. Richardson lives in Poplar Bluff with his wife, Dr. Amber Richardson, and their two children.

“I have known Todd Richardson for many years, and he is a man of unquestioned integrity, leadership, and intellect,” Christy Shawan, CEO Black River Medical Center in Poplar Bluff said. “I am confident he will combine those character traits to lead MO HealthNet in a way that will benefit the health and welfare of Missourians for years to come.”