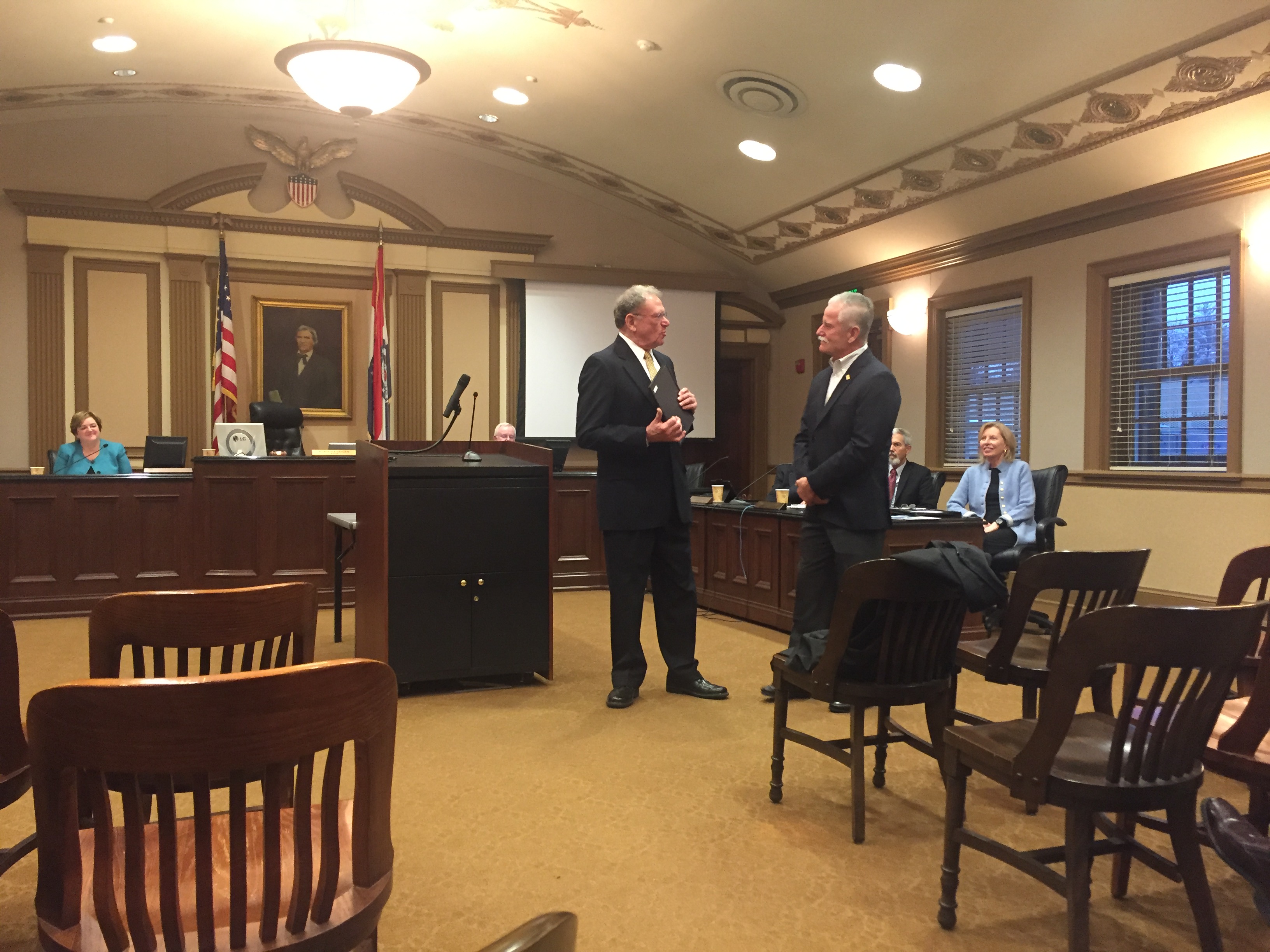 Although Gary Scheipeter, superintendent of the Clayton Public Works Department, won’t retire for another week, he got a chance to say goodbye to the city Tuesday night when Mayor Harold Sanger and other city officials recognized him at the Board of Aldermen meeting.

Scheipeter received a proclamation for faithfully serving the residents, property owners and visitors of the city for 44 years. Mayor Harold Sanger declared April 6, 2018 Gary Scheipeter Day in the city of Clayton.

Scheipeter’s first started as a clerk typist for the city’s street department. After many hours of attending night classes for engineering, countless workshops and seminars on every facet of Public Works by the hands-on method, and seven title changes throughout those years, Scheipeter was promoted to superintendent of Public Works in 1993.

He has been there ever since, the longest serving employee in the city of Clayton.

“It’s been an honor to work for this city,” Scheipeter said. “A lot of people have worked here for many, many years also, which is a tribute to this city, to the elected officials.”

Scheipeter managed 17 full-time and 10 seasonal part-time employees in several departments in his 25 years as superintendent, including streets, forestry and grounds, parking operations and electrical to name a few.

Scheipeter said the city has been a model to other municipalities around the state and added that his job would not have been as easy without the support of every city department.

“We use the city of Clayton as an example on the state and regional level,” Scheipeter said. “We’re very unique because we have such great report with all of the departments, with all of the major events, minor events — all of the situations and everything between parks, police, fire. Other agencies don’t recognize that.”

Other city officials, including the Mayor and Board of Aldermen took time out of the meeting to congratulate Scheipeter on his monumental career with the city.

“I just learned that Gary has been married to the city of Clayton longer than to his wife,”  Sanger joked. “I’m sure there was an equal number of happy and not as happy days, but after 44 years this is a huge amount of intellectual history.

“I wish Gary many happy years of retirement and that he enjoys them with his family and friends.”

Laura Miller, the executive producer of Cultural Festivals, which produces the St. Louis Art Fair in downtown Clayton, also had some kind words for Scheipeter, who has been a part of the organization since it started 25 years ago.

Miller has worked with Scheipeter for 22 of those years and said he has been instrumental in the pre-planning, logisitics and during the weekend of the Art Fair.

“He has this saying, ‘We’ll make it work, we’ll figure it out’ and he always has,” Miller said. “I like to refer to Gary as my partner in crime pretty much 12 months throughout the year. Many people over the years have commented on the Art Fair and how it’s a well-oiled machine and how it appears to be seamless. I would agree, however, there’s a great deal that goes on behind the scenes to make that happen and of course Gary excelled at that role.”

Scheipeter said he’s looking forward to taking some well-deserved time off, especially if it means no more late-night jobs.

“Forty four years is a long time, it’s time to move on, but it really has been a pleasure,” Scheipeter said. “My wife is tickled to death, my family and my grandkids are tickled to death that paw-paw is going to be home on the weekends and nights and holidays, with no phone calls in the middle of the night.”

In other business, the board unanimously approved a contract for new financial management and human resources software.

The Clayton Finance Department recently issued a Request for Proposals for an enterprise-wide financial management and Human Resources/Payroll system.

The Center of Clayton will pay a portion of the cost, according to city documents. New World, the company behind the software, has waived the first-year maintenance fees, and the second-year maintenance will be $35,406, which is less than annual maintenance on the current system.