Millennials stepping up to leadership within the Missouri General Assembly 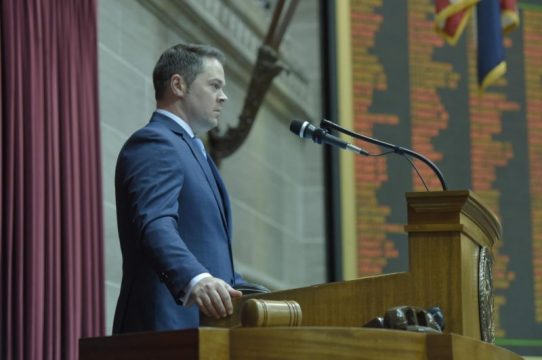 The Missouri General Assembly has a new age of leaders that grew up in an era unlike any before and they are stepping up to move the Show-Me State forward.

Millennials have never experienced a world war or a draft yet saw American attacked on its own soil. They watched the early stages of the world-wide-web that used a dial-up connection evolve to having the internet available in the palm of their hand and instant access to information.

The generation born between 1981 and 1996 has inspired such headlines as “Young Americans Are Killing Marriage,” “Are Millennials Killing the Lottery Industry?” and “Buffalo Wild Wings CEO hits back at activist investor and blames chain’s problem on millennials.”

Now, lawmakers have chosen a handful of millennials to take on leadership positions within the different caucuses.

The House Republican Caucus, the House Democratic Caucus, and the Black Legislative Caucus are all being headed by an individual that falls into the Pew Research Center’s definition of “millennial.” The number two Republican on the Senate side also falls into the same generational classification along with several others in leadership positions.

“I think you have this new generation of leaders that believe in themselves and have the confidence to go forward and reach for their greatest ambitious,” said Rep. Steven Roberts Jr.

The Pew Research Center uses a 16-year-span — the same age span of Generation X and shorter than the span of the Baby Boomer generation — from 1981 to 1996 for a working definition of millennials, also known as Generation Y.

“With this being the 100th general assembly, generational shifts are the natural progression and many of the issues we are fighting for transcend generations,” said Quade. “That said, it’s exciting that for the first time my age bracket is the largest voting bloc and voted in droves this cycle. Millennials making a seat at the table for policy discussions will bring great insight and I’m honored to be a part of that.”

“This is an exciting time for the Missouri House of Representatives, with leaders of both parties being under 40 and I just turned 30 myself. We are finding the people of Missouri are electing younger representatives. I believe we are ready to lead and show Missouri we can make government work,” said McGee.

It’s not just the Missouri state legislature noting the potential of the younger generation. On a national level, the 2018 midterm dropped the average of Congress lawmakers by 10 years with the election of some of the youngest members in history. Millennials also make up the largest portion of the U.S. labor force.

Yet, the term millennial is sometimes associated with some negative generalities such as being lazy and entitled.

“I think every generation has a stereotype about them that is not entirely true. And I think a lot of it comes from what that generation faces,” said Haahr.

He noted that every generation faces different challenges. Previous generations faced world wars or drafts, or both. They also dealt with widespread illnesses such as polio that has since been eradicated. They got their information from newspapers, conducted research in libraries, and a popular form of communication included handwritten letters.

In contrast, millennials witnessed the Twin Towers being brought down during their formative years. They have instant access to a wealth of information and instant connectivity around the world. To conduct research, individuals now don’t need to go to the library, but can pick up a cell phone and look up whatever they are searching for.

“As a lawmaker, we have much broader access to what is going on around the country,” said Haahr. “We have access to stuff that other states are doing that different generations would never have had access too. In some ways, it makes us much stronger. At the same time, it’s easy to fall into more of a lackadaisical approach.”

“Being a millennial, I think what we lack in experience, we make up with passion and motivation,” said Roberts.

Millennials tend to be more open-minded by dealing less in generalities, according to Rowden. He said that disagreeing with someone on one particular issue doesn’t exclude the possibility of friendship.

And as a lawmaker, relationships with other legislators are important, particularly for those in leadership.

For Rowden, the steps taken to prove a person can do a job, to give people faith in their ability to fill a position, go beyond age and ultimately are timeless.

“I don’t necessarily think age has anything to do with your life experience, what you have seen and done, or your ability to best represent the voters,” said Haahr, who is currently the youngest speaker in the country. “I think people look at caucus leadership, not from a perspective of age but from a perspective of experience and how they can better the causes.”