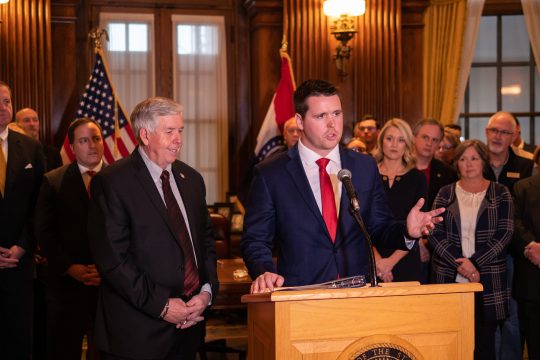 JEFFERSON CITY, Mo. — The top fiscal hawk in the Missouri House will be taking on a new role in January and it won’t be controlling the state’s purse strings.

Hawley, the current Attorney General, was elected to the U.S. Senate in the November General Election. He will be sworn into his new position on January 3, 2019. Schmitt was appointed by Parson last month to fill the vacancy in the state’s top law enforcement office.

With the appointment of Fitzpatrick to complete the remaining two years of Schmitt’s term, there are set to be more changes.

“From the beginning of this administration, it has been a top priority that we strive to provide stability and instill confidence for all Missourians – that we can and will move forward. Missourians will soon have another fully qualified, ready to lead, fiscal conservative managing the Treasurer’s office,” said Parson.

“I want to thank Governor Parson for the tremendous honor of being selected as Missouri’s next state treasurer,” said Fitzpatrick. “As House budget chairman, I’ve worked to protect Missouri taxpayers by passing balanced budgets that eliminate wasteful spending while investing in our shared priorities. As State Treasurer, I’ll continue to work each and every day to promote government transparency and efficiency.”

Fitzpatrick will be the youngest statewide elected official in Missouri once sworn into office and among the youngest nationwide.

In his six years in the Missouri House, the 31-year-old elected official has gained a reputation for fighting for fiscal responsibility and his understanding of the extremely complex budget process.

“The State Treasurer’s job is to be an excellent steward of the people’s tax dollars. Scott has a long record of proven leadership as Chair of the House Budget Committee, and his experience and integrity will serve him well in his new role,” said Schmitt.

The Shell Knob Republican took an interest in budget early in his legislative career and by his sophomore term was named vice-chairman of the House Budget Committee. In 2016, Fitzpatrick was elevated to chair the committee. His vice chair was Rep. Cody Smith, R-Carthage.

Under his leadership, the committee balanced the state’s budget while fully funding the education formula for two consecutive years and the budget committee engineered a freeze of the low-income housing tax credit. Fitzpatrick also led the effort in the House to override four of Parson’s budget vetoes in 2018.

“Rep. Fitzpatrick’s depth of knowledge about the state budget is second-to-none,” said Sen. Dave Schatz and Sen. Caleb Rowden in a joint statement.

He was appointed to the Missouri State Employees Retirement System Board of Directors in June.

Despite his young age, Fitzpatrick is an experienced businessperson. He owns MariCorp, a dock-building company, and was recognized in Springfield Business Journal’s “40 under 40.”

Graduating from Cassville High School in 2006, he then went on to the University of Missouri where he graduated from in 2010. Fitzpatrick and his wife Mallory live in Cassville with their two sons, Luke and Carson.

“Filling Eric Schmitt’s shoes was no small task, but Governor Mike Parson’s appointment of Scott Fitzpatrick is a home run,” said Ray Bozarth, MOGOP Executive Director. “Scott is a successful small business owner who knows how to manage a large staff and make payroll, which are invaluable traits in a state treasurer. Not only that, he was a very effective budget chair in the House, making him uniquely prepared to serve as Missouri’s chief financial officer. We’re excited to see Scott build on Eric Schmitt’s great work and we look forward to working with him in the future.”