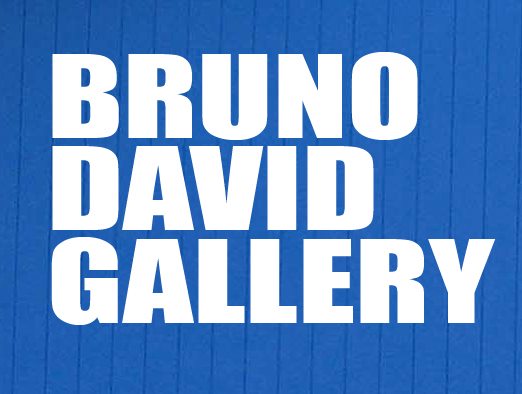 Murray’s black paintings, created with ivory black oil paint, are little like searching in a dark room with a flashlight that only brightens the few inches in front of it. Feeling our way along the walls, trying to identify the furniture and layout of the place we found ourselves in. The paintings look like a landscape you could walk right into. It’s a visual place that is both disconcerting and overpoweringly seductive.

As a NYC firefighter during the 9/11 attack in New York City, Murray paints because it is how he justify his life following this atrocious day. Nothing else seems to hold up. He loves paint – love the smell of oil paint and the warm buttery consistency it has while it’s being pushed along by the brush. His current work is both about the paint and the light that reflects on and in it. If you spend time with one of his paintings you might find yourself thinking about the light in the room, with you and that painting. Murray says, “Sometimes the dark is where you find the best surprises.”

James Austin Murray lives and works in New York City and Kingston, NY. Murray was, for 11 years, a firefighter, working in the South Bronx, Harlem, the West Village, and on the Lower East Side. He taught at Parsons School of Design, New York.

Marking the artist’s tenth solo exhibition with the gallery, one of the most important printmaker in the US and Canada, Carmon Colangelo presents a series of new monotype prints exhibition titled “Happy Planet.”

Happy Planet is composed of two new series of prints, Colorful World and Happy Plans combining watercolor monotype and woodcut relief processes printed at the Flying Horse Editions in Orlando, Florida. These recent prints are a playful and somewhat saccharin response to the current state of political affairs; a form of escapism from the sadness of the everyday news cycle. The prints are unique synthesis of ideas generated from contemporary discourses and precedents in modern art and architecture from Alexander Calder’s Circus to Cedric Price’s Fun Palace. The Happy Plan series is composed of laser cut wood plates that operate like architectural sections while the Colorful World prints are multilayered with deep embossments having a marshmallow like effect. Expanding on Colangelo’s daily practice of drawing, the works are derived from chance operations, maps, found materials and printing from discarded laser cut wood plates from architectural models; the result is a generative series of colorful and works where meaning is adaptable to shifting cultural and social conditions.

Carmon Colangelo is a pioneering printmaker whose work combines surrealism and abstraction with the exploration of art history, science, and technology. An enduring feature of Colangelo’s work is the unraveling of free-floating symbols and texts in an aggressive exploitation of various print media. He challenges conventional readings, producing disorienting spatial topologies and striking visual poetics.

Carmon Colangelo (b. Toronto, Canada) lives and works in St. Louis, MO. He is the Ralph J. Nagel dean of the Sam Fox School of Design & Visual Arts and the E. Desmond Lee Professor for Collaboration in the Arts, Washington University in St. Louis. In this role, he oversees the School’s four academic units — the College of Art, College of Architecture, Graduate School of Art, and Graduate School of Architecture & Urban Design — as well as the Mildred Lane Kemper Art Museum. Colangelo’s work has been featured in 30 solo shows and more than 100 group exhibitions nationally and internationally. His work has been collected by many of the nation’s leading museums, including the National Museum of American Art in Washington, D.C., the Whitney Museum of American Art, New York, the Fogg Art Museum, Harvard University, and the Saint Louis Art Museum. He earned a B.F.A. in printmaking and painting from the University of Windsor in Ontario (1981) and a M.F.A. in printmaking from Louisiana State University (1983). In conjunction with the exhibition, Bruno David Gallery Publications will publish an exhibition catalog of the artist’s work with an exhibition history and bibliography.

Using diverse media, Bunny Burson continues to address the consequences of elections. Her video and the snow globes, And Still I Rise 2017, were inspired by her installation in the Bruno David Gallery’s Window on Forsyth last spring (2017). They contain the confetti, which never fell from the Javits Center ceiling on election night, November 8, 2016. They motivate us to act, to vote, to resist. The cast cotton artworks (It Will Happen, Momentum, and Rise) reference the glass ceiling, and the need to continue to empower young people to pursue their goals. Through her artwork, Burson speaks politically and poetically to engage the viewer and to stimulate dialogue about the important issues we face.

Bunny Burson, born in Memphis, TN., received a B.A. in French from Tulane University, which included a year at the Sorbonne in Paris. She earned a B.F.A. from the Memphis College of Art and an M.F.A. from the Sam Fox School of Design and Visual Arts at Washington University in St. Louis. Her work has been exhibited nationally and internationally, including in New York, Memphis, Snowmass, Colorado, Nashville and Leipzig, Germany. Awards include an artist residency at the Cité Internationale des Arts in Paris and the Sam Fox School of Design & Visual Arts-Washington University in St. Louis Award for Distinction.

Listen the interview of Bunny Burson by Schuyler Swenson of Public Radio International at https://www.pri.org/stories/2017-11-02/searching-hillary-clinton-s-unused-confetti

The new paintings in this exhibition is inspired by the acoustic shadow phenomenon that occurred during the Civil War. Where sound goes to die, acoustic shadows are areas where sounds, from a certain direction and on a given day, will not penetrate; these acoustic phenomena occur either because the sound waves are absorbed, refracted or simply blown in a different direction. Relatively unnoticed in our modern, wired world, acoustic shadow played a significant role in some of the most famous battles of the American Civil War. Her research is nonobjective paintings, so she is not doing an illustration of acoustic shadows. She is creating visual images that are inspired by descriptions and the concept regarding sound. Beard says, “It is fascinating and challenging to conceptualize sound in the silent language of visual form.”

Laura Beard was born in Plattsburg, New York. She is an Associate Professor of Painting and Drawing at the University of North Texas, Denton, TX. She received her Bachelor of Fine Arts in painting and printmaking from Colorado State University and a Master of Fine Arts in painting from the University of Washington in Seattle. Beard’s work has been featured in solo shows and group exhibitions nationally and internationally She lives and works in Denton, Texas.

ABOUT THE BRUNO DAVID GALLERY & BRUNO DAVID PROJECTS Founded in 1983 in New York City, Bruno David Gallery and Bruno David Projects has been a leading art gallery since its establishment in Saint Louis in 2005. Bruno David represents some of the most innovative artists practicing in Saint Louis, along with artists of international reputation.