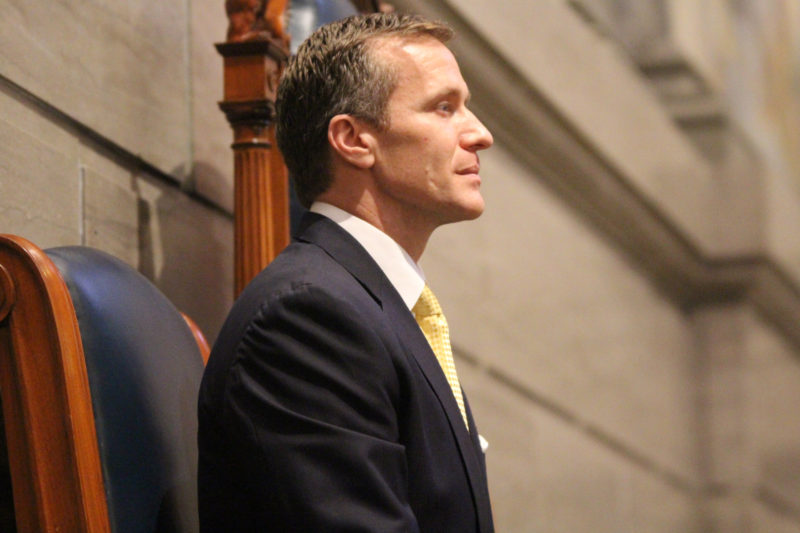 Governor Eric Greitens outlined his FY19 budget proposal at a press conference in the Governor’s Office.

The Governor’s budget proposal includes increases in funding for infrastructure, education, public safety, and programs to protect Missouri’s most vulnerable children—funded by reductions in spending on higher education institutions, efficiencies in Medicaid spending, and other smaller reductions in government spending.

“The budget we’re introducing today is a common-sense, conservative budget. We’re watching out for the tax dollars of the people of Missouri, making important investments in Missouri’s future, and also making tough decisions to make sure we don’t burden our children with debt,” said Governor Greitens.

“Our budget increases funding for our priorities: infrastructure, education, public safety, and protecting our most vulnerable children. We’re able to afford those investments by making tough choices, protecting every taxpayer dollar, and eliminating wasteful spending.”

Included in the Governor’s proposals are:

–          $25 million for a Jobs and Infrastructure fund to pay for key infrastructure projects that will attract jobs.

–          More than $29 million in new funding for programs that assist Missouri’s most vulnerable children.

The Governor laid out his priorities for investment as well as the government spending that would be cut under this proposal in his budget summary. That summary can be found here: https://oa.mo.gov/sites/default/files/FY_2019_Budget_Summary.pdf.

Praise for the Governor’s Budget Proposal:

The below stakeholders offered support for the millions in new funding proposed to support children with special needs and those within Missouri’s adoption and foster care system:

Lori Ross, CEO and President of FosterAdopt Connect said, “We are grateful for the Governor and First Lady’s commitment to our state’s most vulnerable children and look forward to working with them in 2018.”

The Central Missouri Foster Care & Adoption Association is pleased that our Governor, Eric Greitens continues to protect our vulnerable kids in foster care and those awaiting adoption. The Governor and First Lady Sheena Greitens understand the deep affects trauma has on children who have been abused and neglected. By putting our defenseless and innocent children first we will see long term positive outcomes in Missouri, said DeAnna Alonso, CEO of Central Missouri Foster Care and Adoption Association.

The below stakeholders offered support for $25 million in new funding to establish a new Jobs and Infrastructure Fund that will assist local governments with matching funds to ensure infrastructure is in place to attract, retain and grow Missouri businesses and create additional jobs for hard working Missourians:

Missouri Chamber President Dan Mehan weighed in on the Fund during its announcement with the following, “The business community is increasingly vocal about the need to invest in the connections that will support our state’s economic future. These needs go beyond the well-publicized issues with our transportation infrastructure. Missouri also needs to make key investments in our ports and utility infrastructure—investments that will boost the economies of communities across Missouri. With the proposed Jobs and Infrastructure Fund, Gov. Eric Greitens has found a creative approach to help address this problem. We thank the Governor for his focus on this issue and we urge the legislature to support this plan as they pass a budget this spring.”

Leonard Toenjes, President of Associated General Contractors added, “Due to the magnitude of the infrastructure problem in Missouri, AGC of Missouri supports any and all efforts to close the gap between available resources and the long list of needs.  A combination of traditional and innovative approaches to funding every type of infrastructure are necessary to improve the economic climate in our state.  AGC of Missouri welcomes this proposal to start to address this issue.”

“As Congress focuses on infrastructure at the federal level, the effort announced today by Governor Greitens will really help Missouri’s ability to attract quality employers and to help our existing employers,” said Ray McCarty, President/CEO of Associated Industries of Missouri. “We applaud this effort to use our state funds for vital infrastructure improvements that are always near the top of the list for companies looking to locate or expand,” he said.

“Maintaining and expanding Missouri’s infrastructure is critical to economic development and job creation throughout the state. Gov. Greitens’ proposed Jobs & Infrastructure Fund further proves this administration’s commitment to creating jobs. This innovative approach is a new tool in our economic development tool box that will help us expand our existing businesses and attract new ones,” said Jessica Craig, President of Missouri Economic Development Council.

Bruce Wylie, President/CEO of The American Council of Engineering Companies of Missouri added, “ACEC Missouri is pleased to support the Governor’s budget proposal to address our state’s ever-increasing infrastructure investment deficit.  Our member engineering companies work with local governments throughout Missouri and know all too well the state’s infrastructure needs – be it transportation, water, or utilities.  We believe renewed investment in infrastructure will bring about short and long-term economic development and jobs for Missourians.”

The below stakeholders offered support for the Governor’s $7.6 million in new funding to modernize river ports statewide to facilitate the transportation of Missouri goods and stimulate economic development along Missouri’s waterways:

“Increased funding for our ports is incredibly important for Missouri’s farmers. Missouri has historically had an enormous geographic edge by sitting at the confluence of the Missouri River and Mississippi River, as well as the confluence of the Mississippi and Ohio. We can only take advantage of this position if we have inland ports that can handle modern needs. Selling to new markets requires moving goods, and Missouri is showing that it understands this by funding port infrastructure,”  said Missouri Farm Bureau President, Blake Hurst.

“As transportation costs for ag products increase, we’ve seen a strong relationship to our farmers being paid less per bushel. Reliable river service and the associated public and private investment in port facilities is key to maintaining Missouri soybean farmers’ competitive advantage in reaching our export markets around the world,” said Matt McCrate, president of the Missouri Soybean Association and a farmer from Cape Girardeau. “Soybean movement by barge is expected to double by 2023, and preserving Missouri’s high barge handling capacity is an investment in future success.”

Mandi Brink, President of the Missouri Port Authority Association added the following, “The Missouri Port Authority Association would like to thank Governor Greitens for his support of Missouri’s public ports in his fiscal year 2019 budget.  Missouri’s public ports are economic engines for communities across the state, supporting hundreds of head-of-household jobs and offering farmers, manufacturers and shippers a low cost alternative to move products to markets around the country and around the world.

The Governor’s inclusion of $7.6 million for port capital projects in his budget will go a long way in addressing ports’ needed infrastructure improvements.  For several years, the MPAA and the Missouri Department of Transportation have worked closely together to identify port projects around the state that will help to increase the amount of freight that moves through our public ports.  This funding will allow port authorities in both rural and urban areas to make progress on essential projects to expand their capacity and continue meeting the needs of Missouri businesses.

We look forward to continuing to work with the Governor and the Legislature to improve Missouri’s public ports.”

“We commend the Governor on this proposed investment. Strong ports lead to strong river transportation which leads to increased market access for corn famers. We are encouraged to see this commitment to building this state’s infrastructure. Missouri should be fully capitalizing on the strategic advantage our rivers provide,” said President Kyle Kirby of the Missouri Corn Growers Association.

“The cost of the opioid crisis can be calculated in both lives and dollars,” said Herb B. Kuhn, Missouri Hospital Association President and CEO. “Governor Greitens’ budget targets investments to reduce the toll of the crisis by helping individuals caught in the web of addiction, helping health care providers identify addiction risk at the front line of care and reducing the chance of accidental death from overdose. Together, these investments will make Missouri stronger and reduce the massive economic consequences of the crisis.”

“Missouri continues to struggle with the opioid epidemic. Local public health is dedicated to a multi-sectoral approach to curbing this epidemic with strategies that use all of the tools at our disposal. Additional resources will be a key in our efforts toward combating this epidemic,” said Clay Goddard, Director of Health for Springfield-Greene County Health Department.

Dr. Jaye Shyken, Medical Director at the Women and Infant Substance Help Center (WISH Center) in Saint Louis added, “We have long-known that addiction is a multi-generational disease, but it is no more apparent than in pregnant women seeking help.  Neonatal abstinence syndrome, or a newborn’s withdrawal from maternal opioid use has more than doubled in the State of Missouri since 2011.The costs continue to increase in hospital care, and to the social safety network as a result of these births.  In 2015, 985 infants carried this diagnosis, at a cost of $196 million, nearly $166 million to Missouri Medicaid.

Expanded medication assisted treatment and chemical dependency services interrupts this trend.  But this can be an unfulfilled promise if women, in the absence of continued access to medication and services after delivery results in relapse. Many pregnancies to women who are addicted to opioids are unplanned. Focused attention on this population in the way of diminishing relapse through medication, mental health attention and chemical dependency treatment will result in a greater chance of return to a productive life and the next pregnancy in sobriety. The returns in decreased costs of neonatal abstinence and hospital days can be measured. The gains in improved quality of life, individual productivity and family preservation are incalculable.”

The following stakeholders included a statement of support for increased funding to Missouri first responders and law enforcement:

“The Missouri State Troopers’ Association appreciates Governor Greitens’ continued commitment to public safety through these initiatives for the upcoming fiscal year.  Some of these are long overdue and will be beneficial to the state of Missouri for years to come.  It is always our goal to have the best training, best equipment, and competitive pay.  With this budget, the Governor has stepped forward to prove that he truly does have the backs of law enforcement in this state,” said Matt Broniec, President of the Missouri State Trooper’s Association.

“The Governor has long been committed to public safety and our law enforcement officers. His latest budget is another confirmation of that support. I am very pleased to see that the Governor is serious about making sure our first responders have the equipment and training they need to do their jobs and keep Missourians safe,” said Jim Arnott, Vice President of the Missouri Sheriff’s Association.