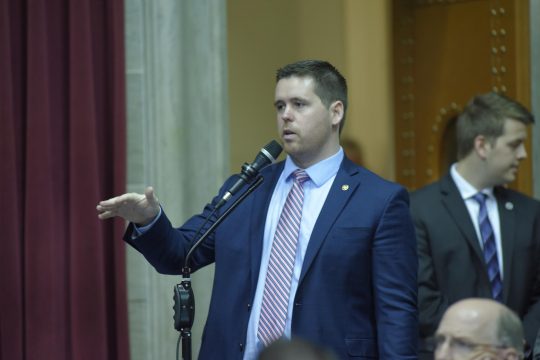 JEFFERSON CITY — The constitutionally-mandated veto session for the Missouri General Assembly ended without any of Gov. Mike Parson’s vetoes being overridden.

The House voted to override four of Parson’s line-item budget vetoes. The Missouri Senate discussed the topics but did not bring them up for a vote.

During debate in the House, Rep. Rocky Miller said that he had heard the Senate planned to adjourn without taking up any of the overrides. A move he said would “short circuit” the legislative process.

He said the Senate must discuss the vetoes and hold a vote on them.

“Your job is to vote,” Miller said.

But vote, the Senate did not. When the overrides where reported to the Senate the lawmakers in the upper chamber discussed the budget line-items but no motions were made.

In all, the House overrides totaled less than $1 million of the state’s $28 billion budget. Brown, who is the Senate Appropriations Committee Chairman, recommended that none of the items be overridden.

Parson’s administration assured Brown that $487,000 vetoed for juvenile public defenders and $100,000 vetoed for the Office of Child Advocate could be restored as supplemental budget items when lawmakers return for first regular session of the 100th General Assembly.

According to Brown, the $153,000 for the state’s Time Critical Diagnosis Unit and $45,000 for the Commission for the Deaf and Hard of Hearing were not necessary because those services can be provided through the existing budget.

The override effort was led by Fitzpatrick, who said the overrides were not about the Governor — but rather about the issues themselves.

“This isn’t about the Governor, it’s about doing what’s right,” said one representative.

House leadership — including Speaker Todd Richardson, Speaker Pro Tem Elijah Haahr, and Majority Leader Rob Vescovo — all voted in favor of all the overrides. While the majority of Republicans followed their lead, some like Reps. Kevin Engler, Bruce DeGroot, Kathie Conway, and a dozen or so more Republicans voted against the overrides.

Two of the vetoed line-items that were successfully overridden was funding for legislation that had passed in the last several years. Fitzpatrick noted that then-Sen. Parson voted in favor of both measures.

“Let’s keep the commitments we made. If we don’t want to fund it, we shouldn’t pass it,” said Fitzpatrick.

One of the overrides was Parson’s veto of $45,000 in funding for the Missouri Commission for the Deaf and Hard of Hearing. It was passed the House 120-30.

Another override was the veto of $100,000 for the Office of Child advocate’s to hire two additional employees. It was passed the House 134-16.

“[The Office of Child Advocate’s] is of huge importance to protecting the most vulnerable in Missouri,” said Rep. Crystal Quade.

The House voted 118-28 to override Parson’s veto of $487,000 for Juvenile Advocacy Units in Kansas City and St. Louis. The line-item would provide 9 full time employees to the Public Defender’s office to find staff members in the juvenile advocacy unit for minors.

Rep. Phil Christofanelli argued for the override saying it should not matter how rich a juvenile’s partners are because everyone “deserves an equal shake in our system of justice.”

The highly publicized veto of $153,000 to the state’s Time Critical Diagnosis Unit was overridden in a 134-28 vote.

The funding for the unit, which helps direct critically injured patients to hospitals that can best treat them, became a point of contention when the department indicated it would draw money from elsewhere to pay for the program.

“This program is critical,” said Rep. David Wood. “We can’t just take money from somewhere else and do it anyway.”

The House failed to override Parson’s veto of $50,000 targeted to pay for emergency rescue tourniquets for law enforcement agencies across the state. The lower chamber only gained 104 of the necessary 109 for a veto override.