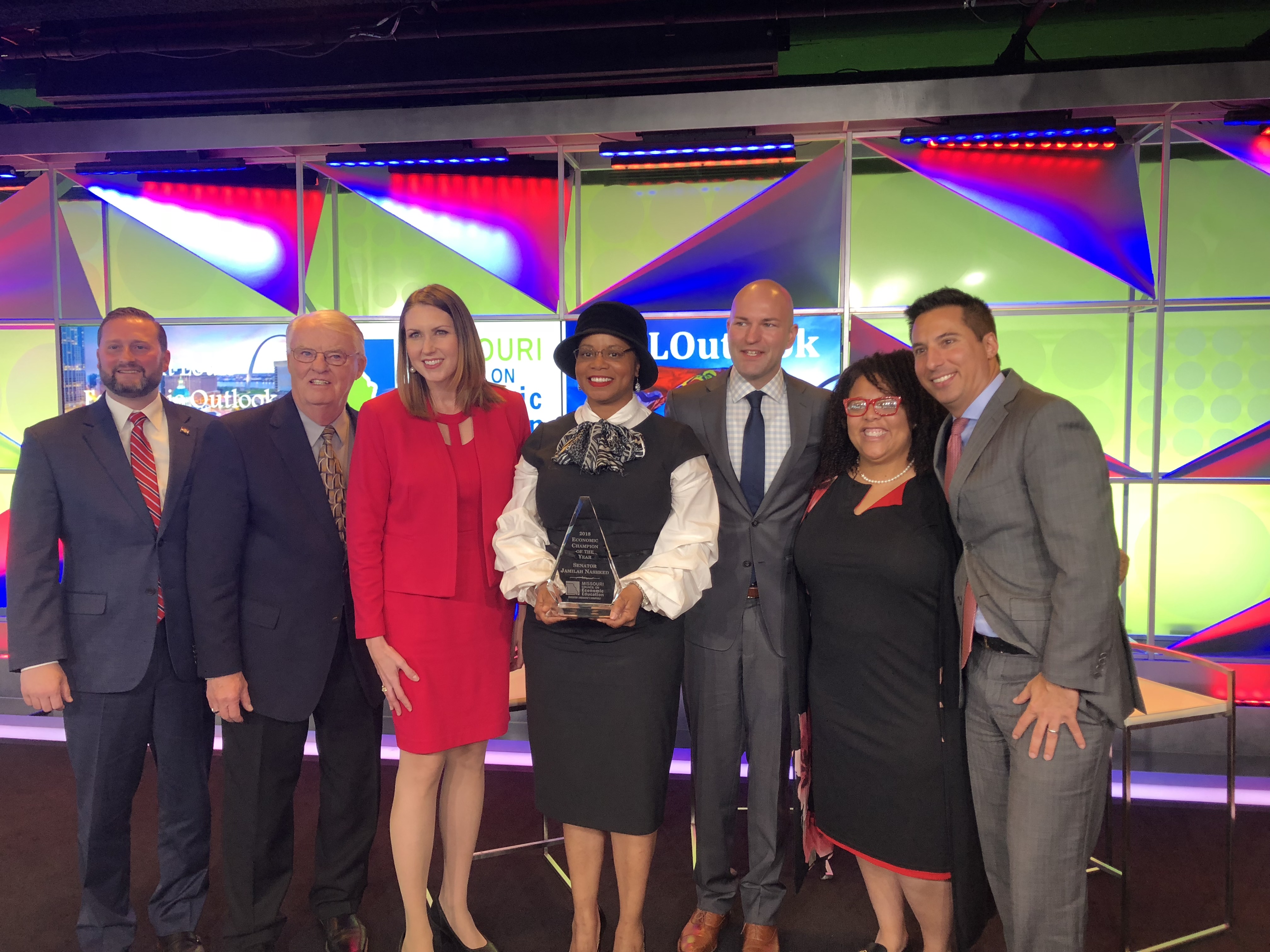 Sen. Nasheed has represented the 5th Senatorial District since 2013. Among others, she is a member of the Appropriations, Economic Development and Commerce, Consumer Protection, Energy and the Environment Committees. Through her work, she has secured to fight crime, poverty and property and neglect while also increasing education opportunities and job programs for people across the city of St. Louis.

“On behalf of the Missouri Council, I am pleased to award the St. Louis Economic Champion of the Year Award to Jamilah Nasheed,” Thornton said. “She has used her time as a legislator to champion and improve the lives of St. Louisans in all walks of life, particularly young people and recently incarcerated. She is a true champion of St. Louis and the people of Missouri. The Missouri Council of Economic Education is proud to name her as its 2018 St. Louis Economic Champion of the Year.”

During the luncheon, there was also a panelist. The Missouri Council brought policy makers, industry leaders and academic innovators together to discuss the workforce development, economic growth and academic advancement in the St. Louis region.

“Today we are here to rebuild our city brick by brick,” Nasheed said. “Today we gather to discuss our region’s economic outlook. Our outlook is very strong. We are going forward so that our community can be better when it comes to education, job creation and those young men and women fighting hard to get a quality education.”

“St. Louis has a history of being strong and resilient,” Leathers said. “As economic challenges come and go, as uptakes come and downturns face the St. Louis regional economy, St. Louis always comes out stronger and more resilient on the other side.”

Hall explained that the city has the largest population collapse and looking at all of the undercurrents that St. Louis has gone through really forces the region to be innovative. Hall also said that the region is one of the hottest startup communities with people creating new businesses, places like T-Rex in downtown and Cortex in the midtown innovation district.

“When I see that raid of innovation,” Hall said. “That raid of people coming together creating new economic opportunities I’m eternally optimistic about St. Louis.”

Prince echoed Hall’s level of optimism for St. Louis. She said that the optimism shows a willingness of the leaders to look at what has been done wrong in the past, for people of color, people living in poverty and the equality for women, and working to address the diversity and inclusion issues.

Prince also explained workforce revolution which she described as an inspiring and empowering moment of not thinking outside of the box but blowing up the box. She said that It is about doing work with all walks of life in a very intentional and aggressive method.

The panelists spoke on the state of St. Louis and the mentality that the region can be the best, but individuals need to come together to have the conversation on how to take action. They talked about being civically organized when coming together and understanding that everyone is going to have differing opinions.

Hall, Leathers and Prince also discussed the workforce and what has already been done to move forward. They talked about working with institutions to retain the talent in the region, especially for college students believing that they are in a safe and vibrant area that is also inclusive and a place that they can be successful.

The panelists spoke to the matter of making the region the most successful that it can be. To accomplish that, they said that there needs to be work on establishing inclusion, acknowledging the mobility assets and innovative spirit of the region as well as connecting the surrounding economies.