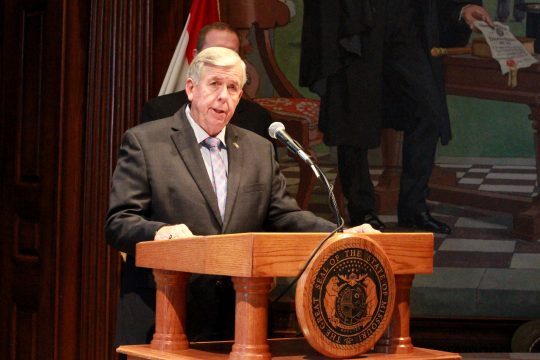 JEFFERSON CITY, Mo. — The leaders of Missouri’s pursue strings from the executive branch touted their steps towards a more transparent state budget when discussing two fledging websites that give taxpayers easy to access information.

During a press conference on Wednesday morning, Gov. Mike Parson, Treasurer Eric Schmitt, and Budget Director Dan Haug talked about the progress that Missouri’s Budget Explorer and Show-Me Checkbook have made in keeping taxpayers informed on how their money is being spent.

“What use to take freedom of information requests, multiple websites to try piece together what was actually happening, it is all in one place now on Show-Me Checkbook,” said Schmitt. “To put that in perspective…the last time Gov. Blunt took this on with the Missouri Accountability Portal back in 2007, Netflix was still delivering DVDs by mail.”

The Show-Me Checkbook website, which is a financial data transparency portal, was launched in August 2018. The website allows Missourians to look up state employee salaries, cash flow, pension liabilities, and expenditures among other features.

Show-Me Checkbook is powered by more than 20 million individual data points, according to an August press release, which makes it one of the most comprehensive state government data portals in the country.

“[Show-Me Checkbook] has proven to be a valuable resource for finding detailed information about Missouri’s year-to-date spending, its revenues, liabilities, and cash flow,” said Parson. “Missouri’s Budget Explorer has become the perfect partner for the Show-Me Checkbook by focusing on the big picture. Missourians shouldn’t have to be budget experts to find up-to-date information.”

Missouri’s Budget Explorer launched in the beginning of October with the intent of providing the public with an easy-to-use, one-stop resource for important information regarding the state’s $28 billion budget. The website enables citizens to explore the details of the budget, including the sources of the state’s revenues and how funds are allocated among the 16 executive departments, elected officials, the legislature, the judiciary, and “even the Governor’s Office.”

The first phase of Missouri’s Budget Explorer was aimed at letting people know where their tax dollars were being spent. Now phase two of the online tool is being implemented which will enable access to the performance measures of all 16 of the state’s executive departments.

“This added transparency will help keep these departments accountable for their program performance. This is a common sense, back to basics management,” said Parson.

Haug noted that the Missouri’s Budget Explorer was developed utilizing existing state personnel and IT staff.