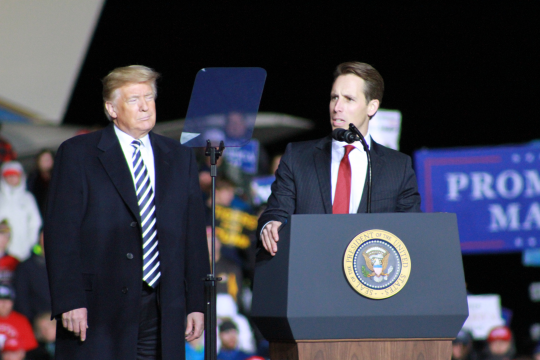 COLUMBIA, Mo. — Speaking to fired-up crowd domed in red ‘MAGA’ hats and American flag apparel, the United State’s commander-in-chief urged supporters to show up at the ballot box on Tuesday and vote for Republican.

Trump traveled to the Show-Me State on Thursday evening to rally support for Republican U.S. Senate candidate Josh Hawley. The current-Missouri Attorney General is in a head-to-head battle with incumbent-U.S. Sen. Claire McCaskill, who has represented Missouri for two terms to date.

Throughout her campaign for re-election, McCaskill has worked to cast herself as a “moderate Democrat” and distancing herself from the far-left of her party.

But in her own backyard in Columbia, Trump referred to McCaskill as a “far-left Democrat” who votes against him. He explicitly tied McCaskill to her party — a party that Trump said has “gone crazy.”

“[Democrats] have gone totally loco,” said Trump. “The Democrats are the party of rigid ideology and total conformity.”

At the same time, he touted low unemployment figures, an increase in jobs, scaling back regulations, and putting conservative judges in the courts.

Hawley is a “rising star,” according to Trump. He noted that Hawley “is going to be something special.”

After being called onto stage by Trump, Hawley made a three-minute speech where he blasted his opponent as “out-of-touch.”

“What she doesn’t understand is that Donald Trump is president because of Missourians,” said Hawley.

Trump will be in Missouri again on Monday for his final campaign stop of the midterm elections, this time at the Show-Me Center in Cape Girardeau.