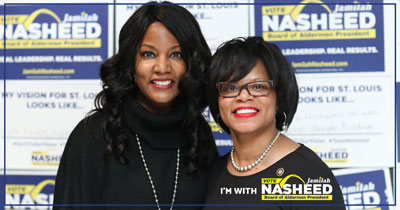 ST. LOUIS, Mo. – During a rally on Saturday for Missouri State Senator Jamilah Nasheed, D-St. Louis, her campaign for Board of Aldermen president was endorsed by St. Louis City Treasurer Tishaura Jones.

Nasheed first announced her run for president in November. She said that she wanted to unite the board and give the members a mouthpiece.

Nasheed and Jones have known each other for a long time. Nasheed said Jones has always been a champion when it comes to progressive values.

“It means so much when she says her support is based on the decisive, effective and progressive leadership our campaign will bring to St. Louis,” Nasheed said.

While the support from Jones is an honor, Nasheed said this is not why she made the decision to run for St. Louis Board of Aldermen President.

“I’m running because the people of St. Louis deserve leadership that hears their concerns, champions their issues and bridges the gaps that divide our city,” Nasheed said.

Nasheed is now asking the citizens of St. Louis City to also endorse the #TeamNasheed campaign. Citizens who are interested in supporting Nasheed can go to her website.

The filing period to run for president closed on January 4th. Nasheed is running against incumbent Lewis Reed and Alderwoman Megan Green, D-15th Ward. Voting will be held on Tuesday, March 5th. With the city being heavily Democratic, whichever candidate wins the March primary will be favored in the April general election.