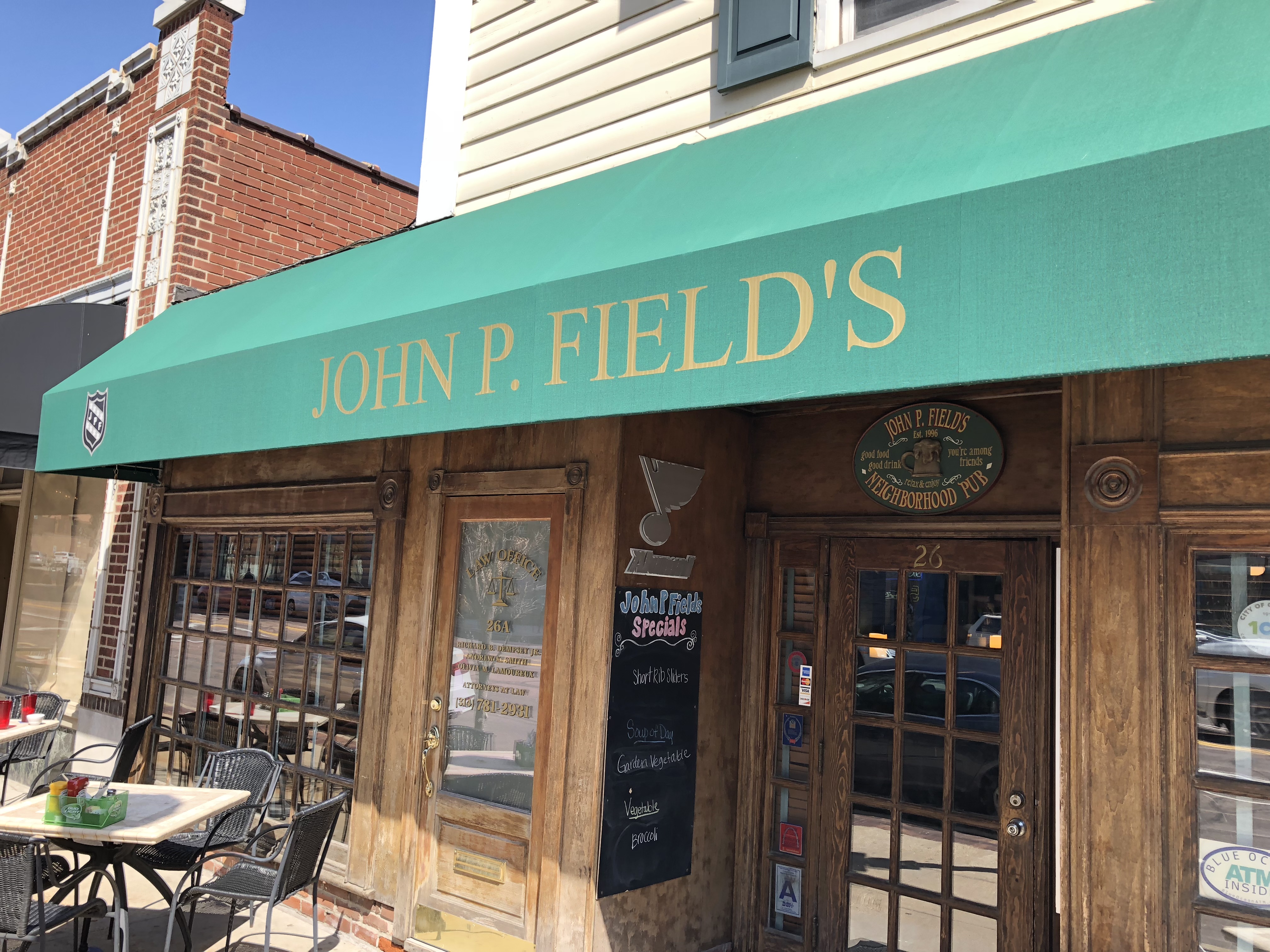 Hockey fans are a breed unlike any other.

For hockey fans it’s more than just a game. It’s a passion.

That passion deserves a home and there’s one right here in Clayton.

Hockey season may be over in the Gateway City, but fans still have an elite hockey bar to catch a glimpse of the playoffs, even if the Blues aren’t playing for the Stanley Cup this year.

The inside of John P. Fields, located 26 N Central Ave., is adorned with Blues jerseys, old NHL photos of some of the Notes’ and NHL’s greats, and features a huge collection of memorabilia wall to wall. It has become one of the best spots in St. Louis for hockey fans around the region.

General manager Tim Pounds had one primary objective when opening Fields in 1996, creating the right atmosphere for hockey fans.

So how is it that this small hockey-themed bar, now owned by former Blue Jim Campbell, has made such a splash?

We sat down with Pounds to talk about the business, and how it has distinguished itself in recent years.

Clayton Times: How did John P. Fields get its start as a hockey bar?

Tim Pounds: I actually opened this place back in 1996, me and a friend of mine, John Harris. Both of us are big-time hockey fans. John Harris had a lot of friends who were hockey players and they kind of gravitated here to hang out and stuff like that. It quickly kind of caught on as a niche hockey bar.

Pounds: Both of us came from Annie Gunn’s restaurant and we wanted to get away from that. This is kind of like a little city within itself, with the residences around it and then the business district and everything like that. And we just kind of liked the people around here.

Clayton Times: What is business like on the night of a big game?

Pounds: It’s pretty intense. We have some hockey lights that are hooked to the broadcast via WiFi, so anytime they score the lights go off. We get a fair amount of people to watch and sometimes the players will meander in afterwards or whatever, so it’s pretty neat.

Clayton Times: What’s the most popular thing on the menu?

Pounds: The Buffalo Chicken Fielder’s are pretty tasty. On top of that we’ve got 15 beers on draft and we try to rotate them seasonally pretty regularly. We have our staples, we’re pretty heavy AB and we have been since the day we opened in ’96. We have a lot of friends both at AB and at Gray Eagle, so we try to be pretty loyal to them. But we have started filtering through some of the local brews and trying out some new stuff as well.

Clayton Times: For a person looking to get into hockey, how would you help them expand their sports horizon?

Pounds: I think St. Louisans as a whole are great sports fans, so on any given night here whether it’s baseball season or hockey season you’ve got some sports fanatics that are generally pretty friendly and open and easy to get along with and strike up conversations.

We’re about 98 percent regulars here and I wouldn’t have it any other way. Everybody knows everybody and since we are in a business district there’s a certain amount of people in here traveling and stuff and they’re pretty well taken under the wing of the regulars as far as the conversation and stuff like that.

Clayton Times: Where does all of the memorabilia come from?

Pounds: We have a guy that we use and we kind of rotate the stuff through and change it here and there. All of it, anything on the wall is for sale. He can make copies of anything for anybody, so it’s pretty neat.

Clayton Times: Does the Blues not making the playoffs significantly hurt your business for the next few months?

Pounds: It’s not as aggressive as if the Blues were in it, but it is a hockey bar so hockey fans will still come watch the games. It is the time of year where the weather is finally turning, so that helps spike the business.

Clayton Times: Do any Blues players, past or present, stop by for a drink every once in awhile?

Pounds: On a fairly regular basis they are definitely coming in and hanging out. We kind of institute a policy where nobody messes with them. We’ve had Gretzky in here. When we first opened he was at the Ritz so he was in here a lot and that really helped kick off the hockey bar aspect because Brett Hull was with him a lot and really the whole entire team back then. We’ve always kind of maintained an etiquette where they’re not pestered because we enjoy having them in here.