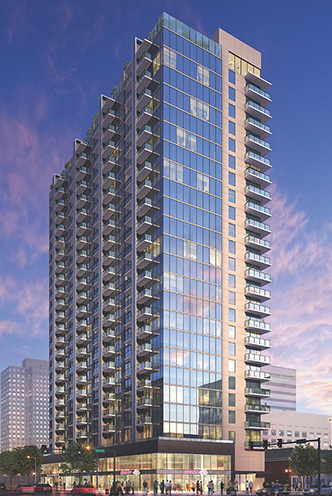 The city of Clayton’s Board of Aldermen will consider a measure approving the $1.1 million sale of a city-owned parking lot at 8049 Forsyth Blvd. during Tuesday night’s meeting.

Indianapolis-based Flaherty & Collins Properties is planning a $70 million apartment tower to be called Shaw Park Apartments on the proposed site. Plans call for a 22-story, 228-unit high-rise would include a 373-space parking garage and 7,800 square feet of retail space on the ground floor.

The proposal has been met with stark criticism from many concerned residents and business owners who say they would be affected by the loss of parking spaces the new building would take away, and are wondering why the proposed plan is being fast-tracked by the city.

On Nov. 20, the Clayton Plan Commission took up the rezoning regarding the Shaw Park Apartments concept. Since then, Gary Feder, senior counsel with Husch Blackwell, has sent two letters to the city of Clayton on behalf of KP Development, a group looking to possibly coordinate with Flaherty & Collins on the project.

“While there have been discussions over the years between the two parties, my sense is that Flaherty & Collins has never really been incentivized in any fashion by the city to take these discussions seriously, and as a result they frankly have never really gotten very far,” Feder said. “At least my take is that Flaherty & Collins was picked by the city to be the developer, the city has indicated from Day 1 that they really want this apartment project, and their attitude is, ‘hey, if you can work something out with KP that’s fine, but frankly if you can’t that’s fine too.’ I think that’s been the problem periodically and certainly in the last few weeks.”

Feder’s letters suggested a meeting between the city, KP, and Flaherty & Collins in order to address a couple of major outstanding topics, namely parking.

“The reason I wrote the letters is because my impression when we went to the plan commission on Nov. 20 was that, at least particularly, Chairman (Steve) Lichtenfeld seemed to really focus on the idea that we could have a much better project for the whole development site, for the whole block — it could be much more economical, much more practical — if we could work together,” Feder said. “We frankly thought that was probably a message from the city and that we would get some effort from the city to organize a meeting between the two parties and really take the lead on that. That didn’t happened.”

Neither KP nor Feder received any communications as a result of either the Nov. 20 Plan Commission hearing or the two letters prior to the Dec. 12 Board of Aldermen meeting where the issue was tabled.

A day later, City Manager Craig Owens called Feder and asked to get the developers together, but that meeting never happened either.

“My response was, ‘part of this is that we presented a lot of concerns about parking for the project at the Nov. 20 meeting. Now, like, three weeks have gone by and we’ve never seen any response from your parking and traffic engineer as to sort of rebutting the points that we’ve raised,'” Feder said. “He said that report won’t be available til Friday and I said, ‘I can’t see any reason at this point to meet because we don’t have the report that’s critical to our having the meeting and a full discussion.'”

According to the agenda for Tuesday night’s meeting, which starts at 7 p.m., city staff is recommending that the Board approve the ordinance and the Purchase and Sale Agreement for sale of the property to Flaherty & Collins.

Officials with the city of Clayton were not immediately available for comment.

“I suppose there always is a chance for the two parties to continue to talk, but it seems to us very clear that the city is absolutely committed as its always been to approve this project, that they brush off any criticism of it and they just want to get it done,” Feder said.

The board also will consider an ordinance that would allow officials to provide tax breaks to developers that bring more retail to storefronts in some of the city’s oldest buildings.

The program is called the Clayton Vibrant Retail and Restaurant Incentive Policy, an initiative that would provide a 50 percent sales tax reimbursement for up to five years to developers who bring retail or restaurants to any of Clayton’s 122 commercial buildings that are 50 years old or older.

Only ground floor space would be eligible for the tax break.

The item was postponed from the board’s Dec. 12 meeting.