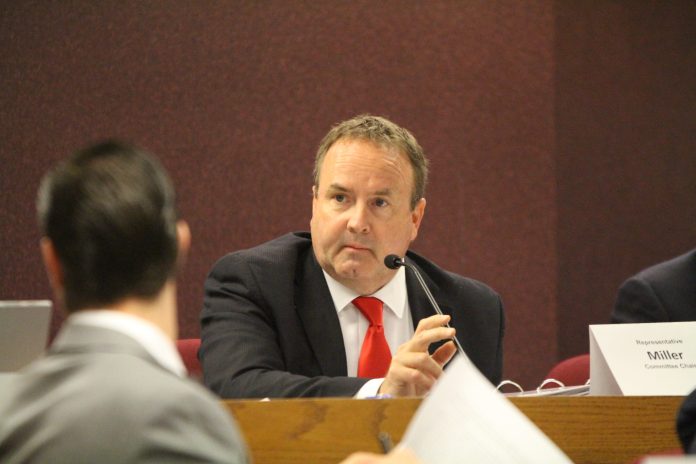 JEFFERSON CITY,  Mo. – The aftermath of the Senate’s filibuster and ultimate passage of Sen. Ed Emery’s SB 564 has left more than a few lawmakers and lobbyists in a state of confusion.

That’s because the bill was finally third read and passed, with an understanding that the changes sought by a group of filibustering senators would be left to the House to sort out.

Some of the changes sought by Sens. Gary Romine, Doug Libla and Rob Schaaf, the three senators who had initiated the filibuster, would have addressed some concerns about the use of plant-in-service-accounting (PISA), as well as lowering the proposed rate caps from the earlier-agreed upon 2.85 percent to 2.25 percent.

The senators also wanted to ensure that savings resulting from the federal tax cuts would be returned to ratepayers immediately without allowing utility companies to defer it to a later date, as well as a provision calling a cap for capital structure, which would be placed at 50 percent, or to be placed under the capital structure of the holding company to prevent any leveraging.

But now that the bill is out of the Senate’s hands, those hoping for those changes now must watch the Missouri House of Representatives to see what’s next in store for the long-awaited utility legislation.

“Obviously, us raising our resistance last week caused us to have an opportunity to have a conversation with the House leadership and Senate leadership,” Romine said. In the midnight hour, there were some issues still in the bill that gave us heartburn, and we really did not get a chance to read the language or do the actual math to find out what it would actually cost or do.”

Romine said that his point was that, if they could not rewind it and go back to fix the bill, then they needed to ensure that the House has a chance to really go through and look at it.

“There were rumors in the hall that the Senate version was going to go through without any amendments so that it didn’t have to come back to the Senate,” Romine said. “That’s a problem for me, and I challenged that and asked to make sure that the House was going to get a chance to fully review it. And I was assured by the House leadership that is the way they conduct business.”

“I know a bill can get through the process without any amendments, and I just wanted to make sure it was clear that there were some problems at the midnight hour, and the only way to really fix those is if the House gets a chance to fully vet the bill.”

That bill will now be handled by Rep. T.J. Berry, whom Sen. Romine says he has spoken with, and intends to try to work some of the changes through amended language in the House.

Romine says that some of the legislators he has spoken with share some of his concerns that the bill’s language does not meet the level of consumer protections he feels are needed, particularly the rate caps and the portions regarding the applying of PISA to the full investment instead of the incremental investments.

However, the House isn’t taking up SB 564 right away.

Rep. Rocky Miller is the chairman of the House Utilities Committee, and he says that their current plan is to take up HB 2265 on Wednesday, which he says is basically a duplicate copy of the Senate bill that was passed out last week.

Miller says that some want to make substantive changes to that bill, which he says he is hesitant about.

“The hard negotiation and the knowledge on the rate caps and PISA is really over in the Senate,” he said. “We can change things that we feel are necessary for a better utility bill, but I would feel uncomfortable changing something like that.

The reason for that particular stance from Miller is simply that, at this point in time, the Senate has invested so much time in the matter, working with consumer groups, utility companies, lobbyists and other lawmakers to negotiate on the legislation.

“Apparently there’s a little buyer’s remorse on the Senate side, and they want to take another shot at it,” Miller said. “And we’re more than willing to let them do it. So we’ll send them HB 2265, which is a lot like it, but maybe with some changes the House would like to see.”

When asked about the concerns that the legislation would raise rates, Miller countered, saying that it would give an immediate cut in electric rates.

“It’s the lowest consumer cap in the nation. I don’t know how much better than that it can get,” Miller said. “It’s a bill that reduces rates and puts a consumer-friendly cap in place.”

“In this case, we’re reducing them, and I never thought I’d actually get to announce that we’re reducing electric rates. We’re going to do it… if this bill passes.”

3,497 thoughts on “Emery’s utility bill on hold for now as House looks to send their own version to Senate”