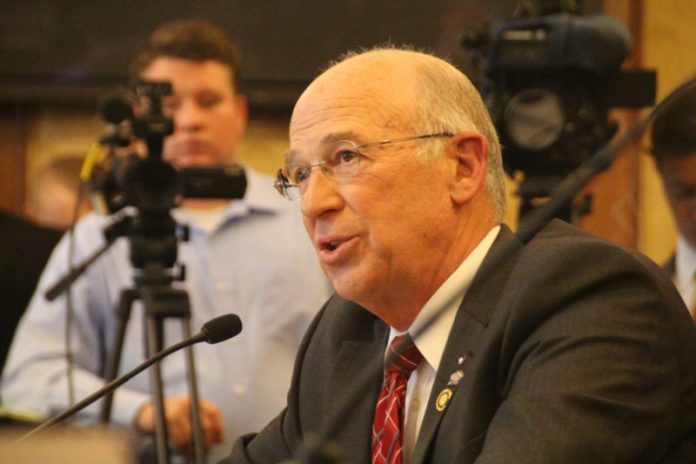 JEFFERSON CITY, Mo. – Utilities are once again pressing forward in the legislature, asking the state’s lawmakers to take a serious look at grid modernization measures in the Show-Me State.

The Senate Committee on Commerce, Consumer Protection, Energy and the Environment heard testimony on Sen. Ed Emery’s SB 564 on Wednesday afternoon, which lasted more than three hours with an equal number of opponents and supporters of the bill.

The bill echoes pieces and parts of Emery’s previous energy bill, filed during the 2017 legislative session, SB 190, though the bill’s language seems to have been reduced or simplified from more than 60 pages to the 16 pages of the current version.

“SB 564 is not completely unlike last year’s bill,” Emery said while presenting the bill before the committee. “Effectively, it’s only about a dozen pages which should make it easier to digest.”

The intent of the bill, as in previous years, has been to encourage utility providers to upgrade their power grids. He cited the results in other states, noting that in the neighboring state of Illinois, the state saw reduced electricity costs thanks to a modernized grid.

Emery explained that the latest bill took some of the ideas formed during the interim and that 12 sections had been removed from the bill.

Sen. Jamilah Nasheed questioned that provision right from the start of the hearing.

“Why shouldn’t they have to go before the PSC?” she asked, to which Emery explained it would be part of the recovery of the fuel adjustment clause.

“All this does is add these elements back in, that was there before,” Emery said, citing a change in recent years.

The second component simply seeks to clarify the complaint procedure against utility under the PSC’s statutes, which Emery said was something the chairman of the commission had asked for.

It also includes a provision allowing the corporations to defer any differences in state and local property tax expenses incurred, a provision for plant-in-service accounting, and requires a 5-year-capital investment plan for the furthering of replacing, modernizing, and securing its infrastructure.

It also includes a provision for discounted electric rates for certain qualifying customers, and requires a contractor “pre-qualification process.”

But the newest provision, which has been called for by a number of organizations, is the rate caps to tbe put on utilities.

Sen. Gary Romine was staunch in his opposition, as he has been throughout past hearings regarding proposed changes to rate-making mechanisms, and on the issue of the rate caps, he had plenty to say.

“The rate caps are not hard caps,” he noted. But he also added that some of the letters encouraging those provisions were not taken through the proper processes of the respective organizations.

“I’m frustrated with some of the efforts,” he said. “Shaul should never have sent that letter out.”

As dozens rose to testify on the issue, it became apparent that, just like in years past, the issue will prove to be a hot one. Speaking on behalf of the Missouri Energy Development Association, Trey Davis noted the demand for a modernized grid, saying the bill would address a number of key areas for ratepayers: cost, reliability and resiliency, economic development, and security.

Sen. Nasheed might have summed up some of the sentiments of most supporters in the room, saying that they could not “kick the can down the road” again.

“Times have changed,” she said. “We’re talking about a 100-year-old grid, and the usage we see today is totally different from the usage of 30 years ago. We have to do something to make it right.”

She told Davis that she did not agree with everything in the bill, but agreed with the need to do something.

“Do you support all provisions of the bill, or just portions of it?” she asked him.

Davis says they approve of the entire bill, but also stated that they had no delusions that the bill’s language would stay as it is throughout the entire legislative process.

“We continue to do the status quo, every rate case, every 11 months,” Davis said. “This is the time to talk about it. If you want to find a better way, or a better scenario, then this can start that conversation.”

Speaking in opposition, David Woodsmall of Midwest Energy Consumers Group (MECG) said the bill is not balanced and was a “tremendous step backward from last year’s bill.”

He contended that the prior bill had sought to give the PSC more discretion, and said the new version would give the utilities more power and the ability to do as they wanted with little PSC discretion.

This bill creates a deferral mechanism,” he said. “Everyone has to manage costs – except for utilities. They are currently allowed to defer several costs, and this bill just adds to the list of things that can be deferred.”

Sen. Dave Schatz, however, may have spoken for everyone during the hearing, with some of the most poignant comments.

“I’d love to make the utilities happy, but my concern is for the ratepayers,” he said. “I would like to see that from every utility – where they have lowered the water instead of raising the bridge.”