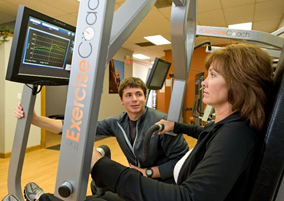 Claytonites will soon have a new, state-of-the-art fitness option that uses modern technology to maximize gain achieved during workouts and only wants you to sweat for 20 minutes twice a week.

The Exercise Coach, an Illinois-based chain, is set to open in early February at 8500 Maryland Avenue Suite 101, still in time for the New Year’s Resolution rush.

The local franchise is owned by Jessica Phillips and her dad Don Eisenberg, who are no strangers to running a family-owned business.

Eisenberg previously owned St. Louis-based MMG Corp., a manufacturer and marketer of men’s neckwear. After selling the company, Eisenberg was planning to retire when he decided he wanted to run his own business again.

He found The Exercise Coach through a franchise broker and brought on his daughter, who had aspirations of helping people rather than staying in the corporate world.

Together, Phillips and Eisenberg own and operate two additional The Exercise Coach locations in Webster Groves and Town and Country.

“I always, since I’ve been a little girl, wanted to help people with their quality of life, and this is the perfect business for us,” Phillips said. “We’re extremely excited to work with the individuals and not just behind the scenes.”

Founded in 2000 in Chicago, The Exercise Coach began franchising in 2011 and currently has 43 studios operating in Illinois, Indiana, Iowa, Colorado, Arizona, Kansas, Texas, Minnesota, Iowa, Wisconsin, Missouri, Georgia, Florida and Tennessee. There are currently an additional 20 units in development in the US, with a goal of seeing 200+ units open and operating in the U.S. by 2021.  In addition, The Exercise Coach began its international expansion in 2017, opening a showcase studio in Japan, with an additional 50 units over the next 5 years.

Phillips said each studio is outfitted with high-tech computerized machines and robotics instead of traditional equipment, such as weights, treadmills, etc.

The national franchise offers a unique, comprehensive approach to fitness designed to be the perfect fit for anyone, regardless of current fitness levels. Workouts combine bio-adaptive exercise technology with the guidance and encouragement of certified coaches. The centers create a dynamic exercise experience that combines personalized strength and interval cardio training in each session on their own, patented equipment.

“We’ve got five machines that nobody else has as well as an incline trainer, a multi-trainer and then we have an ab and lower back,” Phillips said. “But 90 percent of the workout itself is all done on our proprietary equipment.”

The workout itself is tracked on motors and computers. Clients can get instant, digital feedback with every step of their exercise, so they can see how they’re progressing on their “unique strength curve.”

“When they get on the actual exercise, we set their range of motion, their start and end position, and they set their actual intensity level,” Phillips said. “We take them through a series of tests and we measure their strength, and then from there that’s what they workout against.”

Bob Kaiser, who works in Clayton and is a friend of Eisenberg’s, started going to The Exercise Coach’s Webster Groves location three years ago in order to get on a healthier track.

Part of what attracted him was the limited amount of time the 20-minute workout actually takes up, as well as the set time of his appointments, which he says have kept him on track.

“Part of the challenge of exercise is when you don’t have a set time and you don’t have somebody waiting for you there to do it, it’s very easy to say, ‘I don’t have time to do it today, I’m going to put it off till tomorrow,'” Kaiser said. “It’s like everything else — when you know you’ve got somebody waiting and you’ve got a standing appointment, it has made it far more likely that I show up regularly and it’s kind of forced discipline.”

Kaiser said he plans to start going to the Clayton location and added that he’s experienced weight loss, increased strength and increased stamina in his three years with The Exercise Coach, even if he was unsure the 20-minute workouts twice a week would actually work at first.

Phillips said most of their clients from day one are still with them today and continue to see results. She added that the smaller, studio facilities have changed both her and her father’s workout routines for the better.

“I hate the big box fitness center experience and I am a mom with no time for lengthy workouts,” Phillips said, “However, I love working out at and co-owning The Exercise Coach because we have computerized equipment that provides quick, customized fitness sessions and I have a huge passion for helping others.”

Those interested in joining The Exercise Coach can begin making appointments at the Clayton location by calling the Town and Country location at 314-548-2178.

Phillips said they plan to employ five trainers, including herself and Eisenberg, and will take appointments Monday through Thursday from 6 a.m. to 8 p.m., Friday from 6 a.m. to 5 p.m. and Saturday from 7 a.m. to 1 p.m.

2,837 thoughts on “Father and daughter bringing ‘smart gym’ to Clayton”