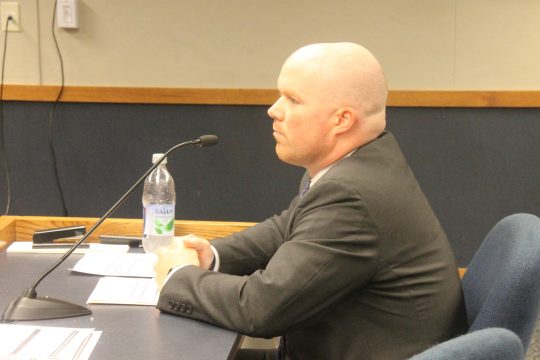 JEFFERSON CITY – If there were any concerns about Rep. Travis Fitzwater’s STEM bill moving through the committees this week, they have been alleviated.

Presenting his bill before the House Committee on Workforce Development, Fitzwater watched people file up to fill out witness forms in support of his legislation before the committee unanimously voted 11-0 to pass the bill out of committee on Tuesday afternoon. In all, it took just 30 minutes.

Fitzwater had little work to do in convincing the committee, which, as Chairwoman Jeanie Lauer reminded everyone several times, had spent a significant amount of time on the bill during the last session. Lauer asked the witnesses to keep their comments specifically on the changes in the bill, which Fitzwater explained were rather minute.

“There were literally no substantive changes to the computer sciences piece,” Fitzwater told the committee. “There were some clarifying pieces, two or three very minimal pieces that DESE requested, nothing to change it in any substance whatsoever.”

The biggest change, according to Fitzwater, was that the number of standards set forth in the legislation had been reduced from 12 to 6, with just 4 being required to be met by the programs, as requested by Governor Mike Parson.

The only real opposition to anything the bill was brought forward by Scott Penman on behalf of the Missouri School Counselor Association.

As Penman explained, Missouri requires students in high school to take three math courses. He pointed out that there exist options to which students may elect to take other courses in lieu of math courses, such as an agriculture class, and said that adding yet another option means that a student could potentially make it through high school without taking a single math class. Penman said that could prove to be a significant problem if students went on to attend college, where they would be required to pay and enroll in a math course.

To take the computer science course in lieu of the math course, parents would need to sign off on it.

The bill that afternoon also passed out of the Committee on Administrative Oversight with little issue, and now heads to the House floor.

Rep. Bart Korman’s HB 1 was not heard in committee, which Lauer said was due to the fact that it did not get noticed up in time.