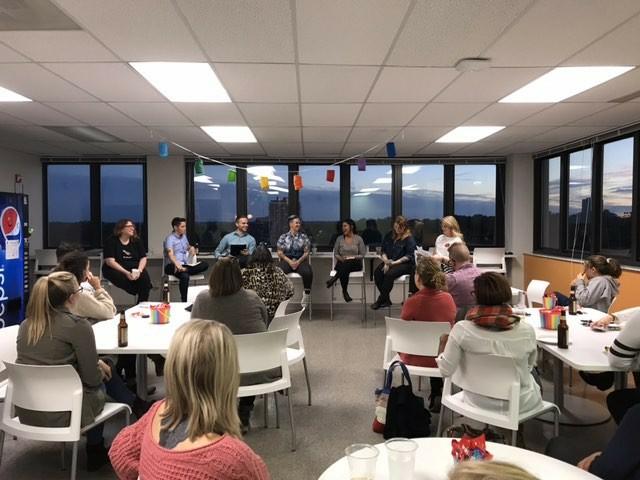 CLAYTON, Mo. – Bullhorn, a Clayton-based staffing and recruiting technology provider along with its Bullhorn Allies group hosted a pride panel at their Clayton, Mo. office on Tuesday.

“We don’t exist to be the exception to your stereotypes,” Caitlyn Rhodes said. “Hopefully, we can be here to show you the stereotypes that you have learned are wrong.”

Bullhorn Allies group is a group which recognizes that diversity in culture, race, gender and sexual orientation promotes a broader perspective and creates a more innovative workplace. Their hopes for the panel was to provide an empowering conversation amongst Bullhorn employees and community members.

“I put my pronouns in my email signature to show students that I am conscious and aware of the LGBTQIA+ community,” Dacoda Scarlett said.

According to Bullhorn Senior Media Relations Manager, Steve Vittorioso there were about 30 people in attendance half from Bullhorn and half from the community.

“One of my favorite quotes right now is, ‘Prejudice thrives in abstraction.'” Rigano said.

Vittorioso said that the event generated conversation and dialogue about coming out and safe spaces as well as how important it is to promote inclusion in the workplace.

“As allies, there are times where we are most supportive by taking a step back and just being ready when called upon,” Kristian Robe, guest and Bullhorn employee said.