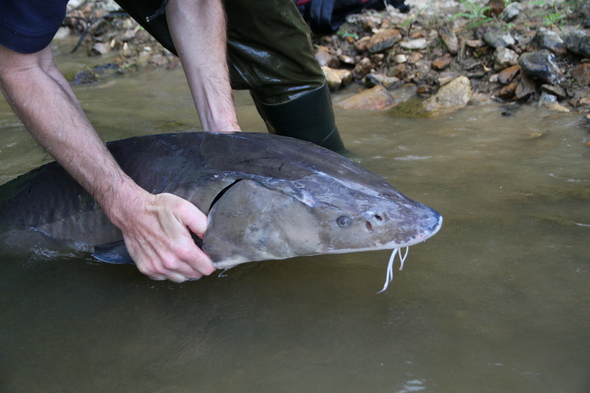 St. LOUIS, Mo.—Not long ago a photo of two great white sharks circulated on social media, allegedly taken in the Mississippi River near St. Louis.  It was soon revealed to be an internet hoax and the photo was actually taken in Costa Rica.

But it turns out there is a big fish story in the Mississippi River, and it is even more fascinating—because it’s true.

The story goes back to a milestone two years ago in the Missouri Department of Conservation’s (MDC) three-decade recovery effort to bring back lake sturgeons to the waters of Missouri.

Giant lake sturgeon can to grow to lengths approaching eight feet and weigh as much as 200-300 pounds.  The fish require 25-30 years to arrive at reproductive maturity, and can reach ages of 100-150 years.  Lake sturgeon evolved more than 150 million years ago during the time of the dinosaurs.

Lake sturgeon were once common in our big rivers, but by the 1970s overharvest and river habitat decline caused their numbers to plummet.  MDC listed the species as a state endangered fish in 1974 and banned their harvest.  Since 1984, MDC and U.S. Fish and Wildlife Service (USFWS) staff have partnered to raise and stock fingerling lake sturgeon into Missouri’s big rivers.

MDC’s efforts finally paid off in April 2015 when lake sturgeon were confirmed spawning in the Mississippi River near West Alton.  During that time, one particular sturgeon on the reproductive move somehow managed to swim up a tributary of the Mississippi River.  He ended up trapped in a pool of Dardenne Creek near New Melle in St. Charles County. The intrepid fish, designated #26026, gained some local notoriety and became known as “Norman” by the public.

Travis Moore, head of MDC’s Lake Sturgeon Recovery Team, inserted a radio transmitter into the fish at that time to track its movements.  St. Louis regional Fisheries Management Biologist Sarah Peper and her crew returned Norman to the Mississippi River.

This past spring a bleep picked up by a USFWS receiver at Keokuk, Iowa, raised the eyebrows of fisheries biologists in Missouri.  It was Norman’s transmitter.  He had travelled over 170 river miles, and through a total of six locks and dams.

“I think its kind cool that his guy is wandering around looking for some ‘ladies’” said Peper.  “He’s made his way through six dams.”

According to Peper, this is possible because during high water the Army Corps of Engineers often sets the gates of the dams wide open and the fish can swim through.  There have been several high water events since Norman was released.  It’s also possible he could have locked through with a barge.

Norman is currently still hanging out downriver of Lock and Dam 19 at Keokuk.  It remains to be seen if he will make it through that one, too.

“I’m happy to know he’s still out there and he made it.  We’re really interested to see if he makes it through Lock 19,” Peper said.

Norman’s story does not appear to be unique, however.  “We’ve asked the public to let us know when they’ve seen or caught lake sturgeon across the state and we’ve had some interesting reports from both the public and MDC staff,” said Moore.  “A few lake sturgeon tagged with transmitters in 2016 have made some rather significant movements.”

Moore reports a sturgeon tagged in the Osage River was detected a couple of miles up the Gasconade River in early April, approximately 30 miles from the tagging site.

Another lake sturgeon tagged in the Osage River near Bonnet’s Mill in 2016 was detected by Peper below Melvin Price Lock and Dam on the Mississippi River north of St. Louis, 130 river miles away from the tagging site.

Moore offered statistics on an even longer journey.  “A fish that was tagged in 2008 at Pool 24 near Hannibal, moved upstream to Keokuk, then he was caught six years later in 2014 in the Arkansas River,” he said. The distance between Keokuk and the confluence of the Mississippi and Arkansas Rivers is about 600 miles.

Collectively, these five lake sturgeon have travelled through four states and well over a thousand miles through the Mississippi River and its tributaries.

This all points to one important fact fisheries researchers are discovering:  fish know no state boundaries and all our rivers and streams are truly connected.  It’s one grand, overarching macrocosm.

“This just reinforces to us how we have to manage river systems as a whole river.  You can’t manage them in a 20 or even 100 mile reach of river—you have to think about the whole system,” said Peper.

The story of Norman and his fellow lake sturgeon travelers is still being written.  But the headline so far is pretty amazing: Giant endangered prehistoric fish begin multiplying again, journey thousands of miles through locks and dams in the rivers around us.

A story like this might just be enough to make a couple of great white sharks look kind of boring.