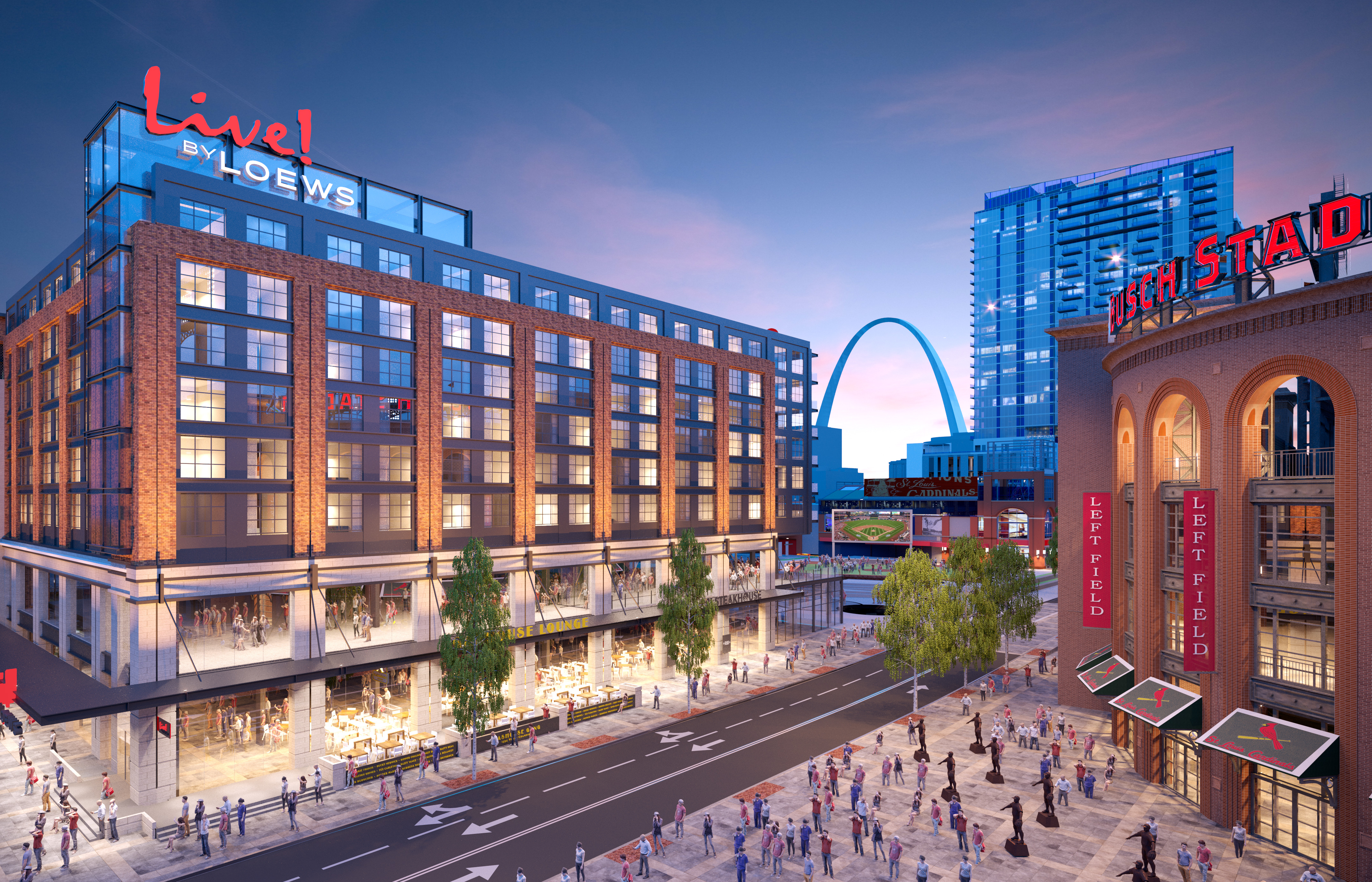 ST. LOUIS, MO (October 4, 2017) – Loews Hotels & Co, a wholly owned subsidiary of Loews Corporation announced today plans to build its first ever St. Louis hotel, which will be part of Ballpark Village’s $260 million expansion project.  Ballpark Village, developed by the St. Louis Cardinals and The Cordish Companies, is a mixed-use dining and entertainment district adjacent to Busch Stadium.  The hotel will debut as Live! by Loews – St. Louis, MO, a partnership between Loews Hotels & Co., The Cordish Companies and the St. Louis Cardinals.

The Live! by Loews hotel concept was developed jointly by two of the most prominent and respected names in hospitality and entertainment: Loews Hotels & Co and The Cordish Companies.  Loews Hotels & Co has been a leader in the hotel industry for more than sixty years, offering distinctive experiences to its guests, for business, group, leisure and family travelers. The Cordish Companies’ Live! brand has set a new national standard in dining, hospitality and entertainment destinations, welcoming over 50 million visitors annually to its entertainment districts. 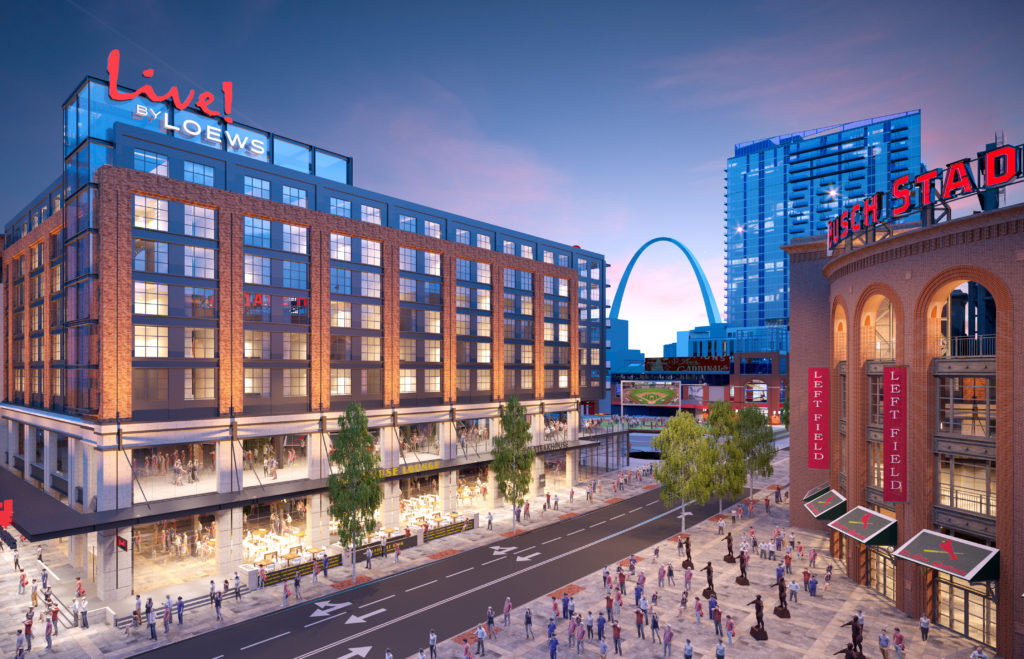 “Expanding the Live! by Loews name in St. Louis, with partners like The Cordish Companies,  the DeWitt family and the St. Louis Cardinals, allows Loews the opportunity to add a unique and immersive hotel into our portfolio,” said Jonathan M. Tisch, Chairman & CEO, Loews Hotels & Co.  “Cardinals fans are some of the most loyal and best in Major League Baseball, and we look forward to having a hotel in the epicenter of the already successful Ballpark Village.”

The $65 million hotel will bring an upscale hospitality experience to downtown St. Louis. Located directly across from Busch Stadium at the intersection of Clark and 8th Streets, Live! by Loews – St. Louis, MO will be a celebration of the rich history of St. Louis, a spectacular destination for sports fans, families, and visitors, as well as a premier location for meetings and special events.  The 8-story hotel tower is part of a dynamic plan to complete a full build-out of Clark Street, transforming it into one of the most unique city streets in all of professional sports.

“We are thrilled to partner with Loews Hotels & Co. on their first St. Louis hotel,” stated Bill DeWitt III, President of the St. Louis Cardinals. “Live! by Loews – St. Louis, MO will be an incredible anchor for Ballpark Village and a tremendous step forward in fulfilling our vision of creating a world-class mixed-use destination next to Busch Stadium.”

“Loews Hotels & Co is one of the most respected names in hospitality,” stated Blake Cordish, Vice President of The Cordish Companies. “We are extremely excited to welcome Loews to Ballpark Village and are thrilled to be growing Live! by Loews to another iconic sports anchored destination.”

Over the past three years, Loews Hotels & Co has expanded its Midwest presence, with the additions of Loews Chicago, Loews Chicago O’Hare and Loews Minneapolis. Earlier this year Loews announced the 800-room, Loews Kansas City Convention Center Hotel, which will open in early 2020.

“We’re excited to welcome Loews Hotels & Co to St. Louis,” stated Mayor Lyda Krewson, City of St. Louis, MO. “Whether you’re taking in a Cardinals game, here on business, or touring the city, we’re confident the hospitality at Live! by Loews will provide visitors a great stay and be a wonderful addition to BallparkVillage.”

Headquartered in New York City, Loews Hotels & Co is a hospitality company rooted in deep heritage in the hotel industry and excellence in service. The hospitality group encompasses branded independent Loews Hotels, and a solid mix of partner-brand hotels. Loews Hotels & Co. owns and/or operates 24 hotels and resorts across the U.S. and Canada, including Bisha Hotel & Residences, Toronto’s newest luxury hotel and the Loews Sapphire Falls Resort at Universal Orlando, the fifth hotel in partnership with Comcast NBC Universal. Located in major city centers and resort destinations from coast to coast, the Loews Hotels portfolio features properties grounded in family heritage and dedicated delivering unscripted guest moments all with a handcrafted approach. For reservations or more information about Loews Hotels, call 1-800-23-LOEWS or visit: www.loewshotels.com.

About The St. Louis Cardinals

About The Cordish Companies

2,298 thoughts on “New hotel will be part of Ballpark Village’s $260 million expansion”