WASHINGTON – U.S. Senator Claire McCaskill today helped lead a bipartisan group of colleagues to introduce legislation to ensure justice for victims of sex trafficking and ensure that websites such as Backpage.com, which knowingly facilitate sex trafficking, can be held liable and brought to justice. 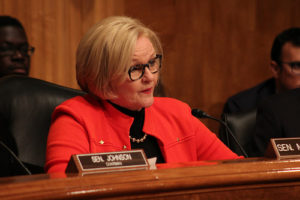 The legislation is the result of a two-year Permanent Subcommittee on Investigations inquiry, led by McCaskill and Portman, which culminated in a report entitled “Backpage.com’s Knowing Facilitation of Online Sex Trafficking,” and found that Backpage knowingly facilitated criminal sex trafficking of vulnerable women and young girls and covered up evidence of these crimes in order to increase its own profits. The measure has been endorsed by the National Center for Missing & Exploited Children and other anti-trafficking advocates and law enforcement organizations.

“Until our investigation showed Backpage was actively facilitating sex trafficking, the company had repeatedly used the federal law that protects online platforms to escape accountability for the disgusting crimes it aided,” said McCaskill, a former sex crimes prosecutor. “But even as we’ve helped deny Backpage its legal shield in these cases, we need a broader effort to stop the next Backpage, before it starts. And that’s what this bipartisan bill is all about—better protecting Missouri’s families from sex trafficking by making clear to any company considering going into business with sexual predators, that the law won’t protect them from responsibility.”

“Stopping trafficking is one of the great humanitarian and human rights causes of the 21st century,” said Senator Portman. “Our bipartisan investigation showed that Backpage knowingly facilitated sex trafficking on its website to increase its own profits, all at the expense of vulnerable women and young girls.  For too long, courts around the country have ruled that Backpage can continue to facilitate illegal sex trafficking online with no repercussions. The Communications Decency Act is a well-intentioned law, but it was never intended to help protect sex traffickers who prey on the most innocent and vulnerable among us. This bipartisan, narrowly-crafted bill will help protect vulnerable women and young girls from these horrific crimes.”

“For years, Backpage.com has knowingly facilitated online sex trafficking and child exploitation, destroying the lives of innocent young women and girls,” said Senator McCain. “It is disgraceful that the law as written has protected Backpage from being held liable for enabling these horrific crimes. Our legislation would eliminate these legal protections and ensure companies like Backpage are brought to justice for violating the rights of the most innocent among us.”

The bipartisan Stop Enabling Sex Traffickers Act would clarify Section 230 of the Communications Decency Act to ensure that websites that knowingly facilitate sex trafficking can be held liable so that victims can get justice. This narrowly-crafted legislation offers three reforms to help sex trafficking victims. The bipartisan bill would:

Portman and McCaskill, the chairman and ranking member of the Permanent Subcommittee on Investigations during the 114th Congress, began their bipartisan investigation of sex trafficking on the Internet in April 2015. With estimated annual revenues of more than $150 million, Backpage is a market leader in commercial sex advertising and has been linked to hundreds of reported cases of sex trafficking, including the trafficking of children.

On January 10, 2017, the Subcommittee held a hearing and issued a report detailing how Backpage knowingly facilitated criminal sex trafficking and then covered up evidence of these crimes.