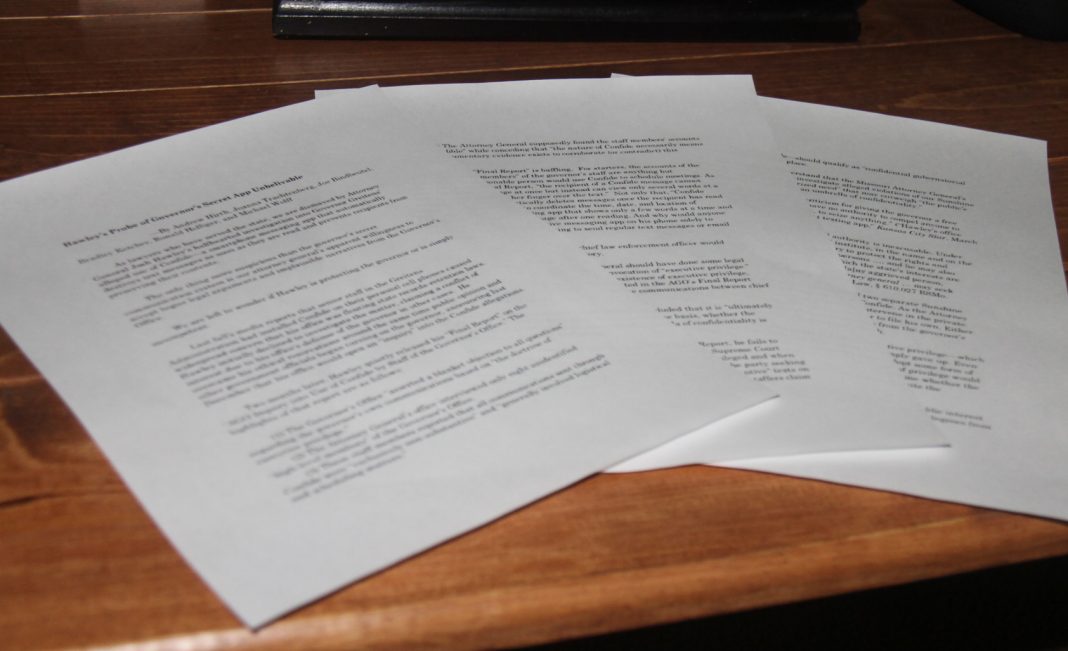 JEFFERSON CITY, Mo. — Earlier this week, a collection of Democratically-affiliated lawyers circulated a memo criticizing the investigation by Attorney General Josh Hawley’s office into the use of the Confide app by Gov. Eric Greitens and his staff, but now, the AG’s Office is alleging there may be more than partisan politics at play, with even some allegations of former employees with an ax to grind.

The lawyers’ letter, released on Tuesday, calls the investigation conducted by Attorney General Josh Hawley’s Office “halfhearted,” saying they wondered whether Hawley was protecting the Governor or he was “simply incompetent.”
“As lawyers who have served the state, we are dismayed by Attorney General Josh Hawley’s halfhearted investigation into Governor Greitens’ alleged use of Confide,” the letter reads. “The only thing more suspicious than the governor’s secret communication system is our attorney general’s apparent willingness to accept bogus legal arguments and implausible narratives from the Governor’s Office.”
It’s not the first complaint made about the investigation, which found that no laws had been broken. The investigation did determine that members of the Governor’s Office did use the text-deleting app to discuss business related to the state, such as scheduling meetings. The Governor was never questioned, citing executive privilege.
“It makes no sense to coordinate the time, date, and location of meetings through a messaging app that shows only a few words at a time and immediately deletes the message after one reading,” the letter reads. “And why would anyone install a separate, super-secretive messaging app on his phone solely to schedule meetings while continuing to send regular text messages or email for everything else?”
Read that letter here:

As for the allegations Hawley’s office points to the need for stronger laws in place, saying that it limits their ability to conduct such investigations.

“This Office has aggressively enforced the Sunshine law, including suits against multiple public bodies. But under current law, the Office’s investigative tools are limited, and that is why the Attorney General has called upon the Legislature to give this Office subpoena power for Sunshine investigations, as well as enhanced Sunshine penalties,” Paradise said.

To this end, at least two legislators in the Missouri House of Representatives have filed legislation seeking to strengthen and modify the Sunshine Law. Rep. David Gregory and Rep. Jean Evans both filed bills this session, HB 2523 and HB 2524, respectively, seeking to create a transparency division within the AG’s office to monitor open records violations by state officials and agencies. Both bills currently await a hearing in the House Committee on General Laws.

“The deficiencies in the Sunshine Law that kept the Attorney General from completing a proper investigation are not a Republican or a Democrat issue,” Rep. Gregory said in a statement. “Transparency is vital to all Missourian’s confidence in their government and I commend General Hawley for reaching out to me and beginning the legislative work to put teeth into the law so that confidence can be restored.”