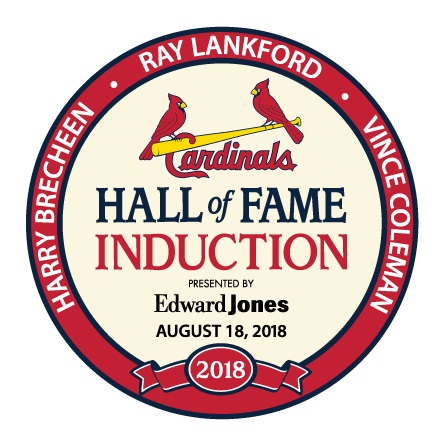 In a television special on FOX Sports Midwest this evening, the St. Louis Cardinals announced that Ray Lankford, Vince Coleman and Harry Brecheen will be inducted into the St. Louis Cardinals Hall of Fame presented by Edward Jones on Saturday, August 18, at FOX Sports Midwest Live! in Ballpark Village.  This is the fifth induction class since the teamdedicated the Cardinals Hall of Fame with an Inaugural Class on Opening Day in St. Louis in 2014. The 2018 Induction Class was selected via a formal voting process which included fans and St. Louis baseball experts.

“Each year, we look forward to seeing who the Red Ribbon Committee and our fans elect into the Cardinals Hall of Fame,” said Bill DeWitt Jr., Cardinals Chairman and Chief Executive Officer.  “The outstanding achievements of these individuals have earned them the honor of being permanently recognized in the Cardinals Hall of Fame, along with some of the greatest names in team history.  We look forward to celebrating the achievements of these remarkable players in August during Induction Weekend.”

Chosen by the fans, Ray Lankford and Vince Coleman were the top two vote-getters in the online Cardinals Hall of Fame balloting presented by Edward Jones.  The ballot, which also included Cardinals legends Keith Hernandez, Jason Isringhausen, Scott Rolen, Lee Smith and John Tudor, was selected by a Red Ribbon committee of Cardinals baseball experts through a secret ballot process.  Over 60,000 votes were cast by Cardinals fans over the six-week voting period, the second highest total since the inaugural fan vote in 2014.

In addition to nominating modern players for fan balloting, the Red Ribbon Committee also elected legendary pitcher Harry Brecheen, a veteran player, for induction using a secret ballot process.  Brecheen (pronounced bra-KEEN) played for the Cardinals primarily from 1943 through 1952, but also made limited appearances in 1940.  Brecheen won World Series Championships with the club in 1944 and 1946.

The St. Louis Cardinals Hall of Fame was established as a way to recognize the exceptional careers and significant achievements of the greatest players in Cardinals history, as well as those who have made exceptional contributions to the organization.  To be eligible, players must have played for the Cardinals for at least three seasons and must be retired as a player from Major League Baseball for at least three years.  The eligible pool of players is divided into two categories of “modern players” and “veteran players”.  If a player retired more than 40 years prior to the induction year, he is classified as a veteran player.

Following is a description of each Inductee’s career as a Cardinal:

Ray Lankford was known for his combination of speed and power during his 13 seasons in St. Louis.  Lankford recorded five 20-20 seasons (with four consecutive from 1995-1998) and ranks fifth all-time in club history in home runs and stolen bases.  He is the only player in Cardinals history with at least 200 home runs and 200 steals, and hit more home runs in Busch Stadium II than any other player (123).  The long-time Cardinal center fielder was named to the All-Star team in 1997 and still ranks in the all-time top-10 franchise leaders in Runs (9th), Total Bases (10th), Doubles (9th), Runs Batted In (8th), Walks (5th) and Game Winning-RBI (T-2nd).

Vince Coleman burst on to the scene in 1985 by stealing 110 bases as a rookie, an MLB record that still stands today, and winning National League Rookie of the Year honors.  Coleman would continue to lead the National League in stolen bases throughout his six seasons as the Cardinals primary left fielder while being named to two All-Star teams.  A member of two National League pennant winning teams in 1985 and 1987, Coleman’s 549 career stolen bases rank him second all-time in franchise history behind Lou Brock.

Nicknamed “The Cat” for his quick, feline-like reflexes on the mound and excellent fielding, Brecheen came up through the Cardinals farm system and is best remembered for his devastating screwball-curveball combination.  He debuted with the club in 1940, but didn’t solidify his role in the starting rotation until 1943.  A two-time All-Star, Brecheen saved his best performances when the stakes were highest, helping the club to World Series Championships in 1944 and 1946.  In Cardinals World Series play, Brecheen ranks first in ERA (0.83, minimum 25.0 IP), second in wins (4) and complete games (3) and fifth in innings pitched (32.2).  For seven straight seasons (1944-1950) the southpaw ranked among the top eight NL pitchers allowing the fewest hits and walks (WHIP) per nine innings and the top ten for strikeout-to-walk ratio.  Brecheen still ranks in the top-10 of several of the club’s all-time pitching categories including wins (8th), earned run average (9th) and shutouts (4th).

The 8,000-square-foot St. Louis Cardinals Hall of Fame and Museum on the second floor of Cardinals Nation in Ballpark Village celebrates the rich history of baseball in St. Louis and the legacy of one of baseball’s most storied franchises.  Since its creation in 2014, the Cardinals Hall of Fame, presented by Edward Jones, has inducted 37 former Cardinal players, coaches and executives.  The Cardinals’ museum collection is the largest team-held collection in baseball and is second only to the National Baseball Hall of Fame in terms of size with over 22,000 memorabilia items and hundreds of thousands of archived photographs.  Fans can learn more about the museum at cardinals.com/museum.