After a winning road trip in Cincinnati and Chicago, the Cardinals return to Busch Stadium for their second homestand of the season.  The six-game homestand kicks off with a three-game series against the Cincinnati Reds (April 20-22) and concludes with three games versus the New York Mets (April 24-26).  The homestand is highlighted by six promotional giveaways, including a Dexter Fowler bobblehead and a Kids Yadier Molina “Player’s Weekend” jersey, and five theme nights. 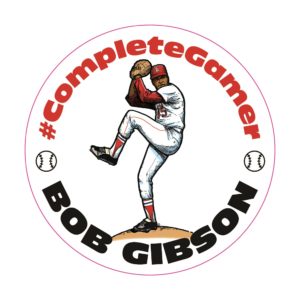 On April 15th, 59 years to the date of his first Major League start, the Cardinals formally launched the #CompleteGamer fan engagement campaign to honor Hall of Fame pitcher Bob Gibson, who played his entire 17-year career with the Cardinals and ended his career with more complete games (255) than his franchise leading number of wins (251).

To reach a new generation of fans, the team has released a #CompleteGamer song and music video that serves as a theme song for the campaign and seeks to convey Gibson’s extraordinary life story in a musical style reminiscent of Lin-Manuel Miranda’s Hamilton by using hip-hop accompanied by powerful music performed by an orchestra.

As part of the campaign, fans are asked to share examples of people that they know who are a #CompleteGamer in their own respective field or vocation.  Each week, the team will highlight at least one fan #CompleteGamer and they will receive a special Gibson autographed item from the team.  Fans can nominate someone through an online submission form at cardinals.com/Gibson.

The club has launched the first-ever Cardinals Fan Music Contest as a way for fans to share their creativity and musical talent, along with their passion for Cardinals baseball.  Fans are asked to write, perform and share an original Cardinals-inspired song/anthem and share the performance via a video or audio file.  One lucky performance will be crowned the winner and receive a trip to Nashville to have their song professionally recorded and mastered at the Shoe Box Studios.  The Cardinals will also produce a professional music video and share the artist’s work with all of Cardinals Nation!  Details can be found at cardinals.com/MusicContest.

This year marks the 20th anniversary of the 1998 Home Run Race that ultimately concluded with Mark McGwire establishing a new MLB single-season home run record.  All season long, we will share content on our social media channels that helps fans relive the 1998 Home Run Race; including videos of all 70 of Big Mac’s home runs, real-time updates on the home run count of McGwire, Sosa and Griffey Jr. and fan images that convey the excitement of that amazing season.

As part of the lookback, the team will be asking fans to share their photos, memorabilia, stories and experiences from the historic 1998 season as the fan perspective is an important part of this historic time in baseball.  Fans can share their favorite #BigMacFlashback memories with us using our online submission form at cardinals.com/McGwire.

The Cardinals Fan Food Guide is available at cardinals.com/food and via the MLB.com Ballpark mobile app to help fans locate their favorite food and beverages at Busch Stadium.

New concession items for 2018 include:

Busch Stadium has moved the Smoking Gate to outside of Gate 1 (southeast corner of stadium).  This new space includes a covered area for guest and free access in/out of the area.

The Busch Stadium Fan Information Guide can be viewed at cardinals.com/info.

Following a successful launch in 2017, the popular ticket subscription service returns for 2018.  Fans can attend as many Cardinals home games as they want each month for a monthly fee of $29.99.  Subscribers will have a Standing Room Only ticket to each regular season game (except Opening Day) digitally delivered to their smartphone via the MLB.com Ballpark app.  The subscription will automatically renew each month and subscribers can cancel at any time.  To purchase the Budweiser Cardinals Ballpark Pass or for more information, visit cardinals.com/pass.

The Cardinals and the Cordish Companies have opened a leasing center for One Cardinal Way, the 297-unit luxury apartment building being constructed at the northwest corner of Broadway and Clark Street, complete with a model unit.  The leasing center, located at 601 Clark Street inside Ballpark Village, provides prospective residents an opportunity to view, touch and feel a fully built out kitchen, bath and living room.

Tours are now available Tuesday-Friday between the hours of 10 a.m.-6 p.m., Saturday from 1p.m.-5 p.m. or by appointment.  Fans can visit OneCardinalWay.com for more information.

The Cardinals are proud to continue to offer the Individual ($50) and Family ($85) Museum Membership options for fans in 2018.  Visit cardinals.com/membership for a detailed list of membership benefits. #CardsMuseum

This year’s new special exhibit entitled “Goodwill through Baseball: Cardinals Across the Pacific” examines how the Cardinals MLB’s baseball goodwill tours across the Pacific have helped pave the way for players to join leagues in the United States and Japan.  Additionally, the official World Baseball Classic trophy will be on display as part of the exhibit through Memorial Day.  Photo opportunities will be available on Saturday home games in April and May.  The special exhibit is open to the public through the conclusion of the 2018 baseball season and is included with admission to the museum.

The Museum is open daily from 10:00 a.m. – 6:00 p.m. and remains open through the 7th inning on home game nights.  Adult admission is $12, and tickets can be purchased at cardinals.com/museum.

Always a man on a mission behind the plate, Yadier Molina was boots on the ground in his homeland of Puerto Rico this offseason as he repaired homes and delivered supplies and hope to many devastated by Hurricane Maria.  In the season-opening edition of Cardinals Magazine, Yadi and his wife, Wanda, share personal stories and photos in an exclusive story you won’t find anywhere else.

Our inside access also takes you behind the scenes with arguably the league’s top outfield trio of Marcell Ozuna, Tommy Pham and Dexter Fowler, and inside the home of pitcher Miles Mikolas—to visit with his wife, Lauren.  Plus, Adam Wainwright’s heartfelt letter to his younger self, the debut of Tommy Pham’s monthly column, our detailed look at the promising wave of young talent in the farm system, and so much more!  Start a print or digital subscription and receive two FREE tickets to a 2018 home game.  To order, visit cardinals.com/publications or call 314-345-9000.

Adorned with beautiful retro cover art by acclaimed St. Louis illustrator Mike Right—the scorecard designer since 2003—this season’s scorecard also features a tutorial on how to keep score the “Cardinal Way,” a method practiced by club officials since the 1940s.  Purchase the scorecard individually—or with the latest edition of Cardinals Magazine for just $5—from Busch Stadium vendors inside the gates, team store locations and red merchandise carts. Scorecards are also available for purchase at cardinals.com/scorecard.

Fans can pre-order game-used bases for any game in the 2018 season by calling 314.345.9851 or emailing gameused@cardinals.com.  For more information, visit cardinals.com/authentics or follow them on Twitter @CardsAuthentics. #CardsAuthentics

Cardinals Insider is a Mid-America Emmy-nominated weekly news magazine television show hosted by Hall of Famer Ozzie Smith.  Now in its third season, the club-produced, half-hour show is available within 18 television markets in nine states.  It provides fans with behind-the-scenes, insider access to the Cardinals from team journalists.  Cardinals Insider gives fans an all-access pass to everything Cardinals baseball featuring exclusive interviews, news updates, profiles and more.  For more information and an updated programming schedule for the show, head to cardinals.com/insider.  #CardsInsider

Back again, Cardinals Nation will host the Official Pre-Game Party of the St. Louis Cardinals before every game.  The ticketed pep-rally style party is located on the second floor of Cardinals Nation in the Hall of Fame Club, two and a half hours prior to every Cardinals home game during the 2018 season.  This exclusive Cardinals Nation pre-game event includes a full buffet menu, all-inclusive bar and a DJ or live music all the way until first pitch.  Only 200 tickets will be allotted for each game, which fans can purchase at cardinals.com/pregame for digital delivery.

Fans can follow the #CardsFoodTruck on Twitter (@CardsFoodTruck) for weekly truck location announcements.  To view the full menu, fans can visit cardinals.com/foodtruck.  Booking opportunities are available by calling 314.345.9880 or emailing foodtruck@cardinals.com.

Every Friday, Fredbird and Team Fredbird will appear somewhere within Cardinal Nation to give away a select number of free tickets or items to lucky fans on a first come, first served basis.  To find out where Fredbird will be each week, follow us on Facebook and Twitter. Visit cardinals.com/fredbirdfridays for more details. #FredbirdFriday

The Cardinals Kids Club is the exclusive club for Redbird fans ages 13 and under.  The 2018 Kids Club membership package includes two tickets to a 2018 Cardinals game, access to the Member’s Only autograph party at Busch Stadium, first in-line access for Kids Run the Bases presented by Prairie Farms, a backpack, hat, lanyard, lapel pin and more.

Membership packages may be purchased at Busch Stadium at the Cardinals Kids Club kiosk located in Family Pavilion or online at cardinals.com/kidsclub.

Cardinals in the Community

Cardinals Care was established to give fans a way of teaming up with Cardinals players and the organization to help children in our community—both on and off the baseball field.  Established in 1997, Cardinals Care has invested over $24 million to support St. Louis area children and built or renovated 23 youth ball fields in local under-resourced neighborhoods.  Most recently, the Cardinals dedicated Dexter Fowler Field at Hess Park in Decatur, Ill. in July.

This season marks the 15th year of Cardinals Care’s innovative Redbird Rookies program, a free baseball league for kids who otherwise might not have the opportunity to play.  In addition to providing all the uniforms, gloves, bats, balls and other equipment needed for each team, Redbird Rookies also provides extensive off-field support in the areas of health, education, mentoring and the cultural arts for each of the nearly 3,000 kids who participate in the program each year.  Fans can learn how to support Cardinals Care by visiting cardinals.com/community. #CardsCare

Ballpark Village is the premiere dining and entertainment destination in the region.  Located in the heart of St. Louis’ central business district adjacent to Busch Stadium, Ballpark Village provides guests with a wide range of entertainment, food and beverage, as well as a variety of events 365 days a year. Join us before and after every single home game for exciting entertainment, giveaways, games, and Todd Thomas!

The St. Louis Cardinals have announced they will produce 39 Spanish language home radio broadcasts during the 2018 season as part of the club’s continuing effort to better reach the team’s rapidly growing Spanish-speaking fan base.

All of the Cardinals’ Spanish broadcast information, video and social initiatives can be found at cardinals.com/SomosSTL. Join the conversation using #STLCardenales or #SomosSTL.