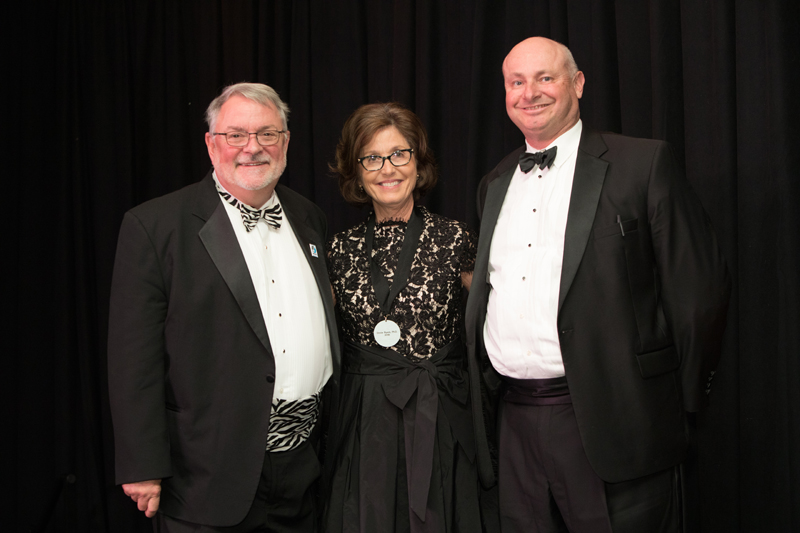 The Marlin Perkins Society has grown from 48 to more than 1,100 members over the past 27 years and has generated over $27 million in revenue – all to help fund Zoo operations.

The Saint Louis Zoo Conservation Award was presented to Onnie Byers, Ph.D., Chair of the Conservation Planning Specialist Group (CPSG). The CPSG is a part of the International Union for Conservation of Nature, the world’s oldest and largest conservation organization. It takes much coordination to get many organizations to work together, and in her leadership role, Dr. Byers is responsible for the organization, design and facilitation of a wide range of species conservation planning to help save wildlife. Dr. Byers has been instrumental in facilitating conservation planning around the world, which includes her work with the Saint Louis Zoo WildCare Institute as an affiliate scientist. She has participated in strategic planning sessions for the WildCare Institute, as well as planning sessions to save hellbenders and American burying beetles.

The Saint Louis Zoo Conservation Award is presented by the Saint Louis Zoological Park Commissioner to recognize the achievements of someone who has contributed to the understanding and appreciation of wildlife throughout his or her lifetime.

The Saint Louis Zoo Individual Award was presented to Judy and Jerry Kent. Mr. and Mrs. Kent began their philanthropic journey at the Zoo as members in 1998 and have since grown to be dedicated Marlin Perkins Society members and avid Zoo supporters. Their most prominent gift to the Zoo is recognized at Sea Lion Sound, which also was selected as the “Best Zoo Exhibit” by USA Today’s 10Best for 2018. Along with gifts to The Living Promise Campaign, the Kents also have dedicated many years of support to the Zoo as members of the Heritage Society. Jerry served on the Saint Louis Zoo Association Board in 2007 and later continued his admirable commitment of service on the Zoological Park Commission in 2013 and then serving as its Chairman.

The Saint Louis Zoo Corporate Award was presented to Centene Corporation. Through its corporate charitable foundation, green practices, community outreach and social responsibility, Centene has been a leader in the St. Louis metropolitan region. The company and its employees are committed to a mission of transforming the health of the community they serve. Centene has been transformational with their involvement at the Saint Louis Zoo. They have supported Zoo events, and many Centene employees have served as board members and corporate volunteers. Centene has been a Marlin Perkins Society corporate member for 10 years, and many Centene executives are individual members as well. The Centene Charitable Foundation has supported the Zoo as an underwriter for A Zoo Ado and ZOOFARI. The company’s gift to The Living Promise Campaign is recognized at the Sea Lion Sound show pool as is their support in Centene Grizzly Ridge.

The Individual, Corporate and Foundation Awards are presented by the Saint Louis Zoo Association to honor those Zoo supporters and advocates whose commitments exceed expectations in contributing both time and resources to the Zoo.