Could we see a veto override this fall?

As the legislature’s annual veto session draws closer, the question of what, if any, legislation could be taken up by the Missouri General Assembly is still being asked. 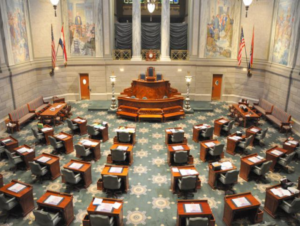 Gov. Eric Greitens vetoed only a few bills from the past legislative session, but when comparing the bills in question and the legislature has been called back for two special sessions now, it stands to reason that the legislators may not choose to try and override any of these vetoes.

Some of the vetoed items may not have any need to be overridden, like the governor’s veto of HCR 19, since UMKC has already made it clear they intend to find funding elsewhere. HB 850 could also be one of the bills that move no further, as it sought to allow the military complaint process to be taken further up the chain of command. Greitens said the military is capable of policing their own and it was an unnecessary bill.

A number of legislators, most of them Democrats, have expressed support to take up HCB 3 in the veto session. That bill’s intent was to provide care to a group of more than 8,000 low-income seniors, veterans and people living with disabilities and minor health care issues by pulling $35 million from various state funds into general revenue as a one-time payment.

Greitens vetoed that bill. And while HCB 3 may be the one getting the most attention, two other bills could be also be brought up.

SB 128 could be brought forward, as it was a criminal justice measure that addressed a range of topics. The bill, which began as a simple one-page document, throughout the legislative process was turned into a 77-page omnibus bill, carrying a multitude of items reflecting changes to the state’s statutes.

One of the reasons lawmakers may be interested in taking it up once again is because it had a provision in it that sought to bring more transparency to the state’s legal settlements, which has cost the Show-Me State millions in recent years. The proposal would have required the attorney general to provide monthly updates on the state’s legal expense fund.

But that it addressed so many things in state statute is one of the very reasons it was vetoed by Gov Greitens. In his veto letter, the Governor noted that the assortment of subjects addressed under the bill are not all related, and as such, would be in violation of Hammerschmidt v. Boone County, which states that “no bill shall contain more than one subject which shall be clearly expressed in its title.”

The bill’s subject is “relating to judicial proceedings” and addressed a number of topics, but the Governor pointed out that some of them seem “entirely non-judicial” in nature.

Examples of this include one provision that would prohibit the Department of Revenue from contacting taxpayers by mail for possible sales taxes owed. Another section would authorize conservation agents to write tickets for littering, while another portion of the bill would let trustees to end up to $250,000 trusts and allow parents to transfer their parental rights by signing a notarized form. The language of the bill could also potentially allow court reporters to charge any price they choose, as they are the only group that can produce transcripts of proceedings

But Sen. Dave Schatz’s SB 65 could also be one piece of legislation brought up. That bill would exempt vessels propelled by outboard jet motors and vessels not originally manufactured with adequate guards or railing from the provisions prohibiting passengers from riding in certain areas of a boat. In his veto letter, Greitens said it would allow anyone to ride on the gunwales and decking over the bow or back of a motorboat without the proper guards and railings.

“To paint a picture, this bill would allow two children to ride on an open bow of a speedboat traveling in excess of 40 mph on any body of water, including the Lake of the Ozarks,” Greitens wrote.

He went on to point out that the state has required these guards and railings for nearly 50 years, and said that according to data from the U.S. Coast Guard, falling overboard are the leading cause of death on Missouri waterways. He also noted that Missouri law enforcement issued more than 900 warnings or citations last year for failure to comply with the state law in this matter.

Out of the bills available to be brought forward for a veto session, SB 65 seems to carry the most votes cast in favor, which could give it the best chance of overriding the Governor’s veto. The question here is whether Schatz, as the Senate sponsor, would put the bill up again or not.

But sources within the legislature seem to indicate that after two lengthy special sessions, and no real change found, this fall’s veto session could be a quiet affair, with no overrides being attempted.

For Republicans, their thoughts now turn to the leadership race, which the Majority Caucus is expected to elect the new designee for House Speaker during the veto session.

Veto session is scheduled to begin on September 13.

(This story was first published in The Missouri Times.”