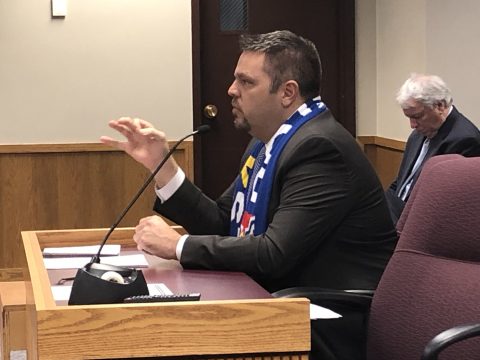 JEFFERSON CITY, Mo. — One lawmaker is doing his part to boost the efforts to a Major League Soccer expansion team to finds its home in St. Louis.

Rep. Justin Hill represents St. Charles County and his legislative district is about 35 miles away from the proposed stadium site. But the regional impact the team could have along with his enthusiasm for soccer has him pushing forward with a House Resolution.

Decked out in an MLS scarf, Hill presented his resolution to the House Economic Development committee on Monday night. HR 210 aims to “encourage and urge Major League Soccer to give serious consideration to placing one of its expansion teams in St. Louis.”

In fact, a self-proclaimed soccer junky from St. Louis made the drive to testify before the committee in Jefferson City.

“We want this team in St. Louis,” said Mike Busick. He predicted that in 10-, 15-years, those abroad will know St. Louis for having a “really good soccer team.”

In the mid-20th Century, St. Louis had an array of successful amateur clubs. Six of the 17 players on the famous 1950’s United States Men’s National Soccer Team, which upset England in a game called “The Miracle Match,” were from St. Louis. The first qualifying match of the 2018 FIFA World Cup between St. Vincent and the Grenadines and the United States was played in Busch Stadium.

St. Louis has also hosted several international exhibition games in Busch Stadium and the Edward Jones Dome with teams including Chelsea, Inter Milan, Manchester City, and Real Madrid; the men’s national teams of Argentina, Bosnia and Herzegovina, and Ivory Coast; and the women’s national teams of New Zealand and the United States.

“St. Louis has a rich history in soccer,” said Hill.

Hill noted this would be the first female-owned franchise in MLS history.

The stadium for the soccer stadium would be “overwhelmingly financed privately,” according to plans #MLS4THELOU put forward. Hill specifically noted that “this effort would deliver an exciting new professional team without siphoning public funds” and that there would be “no new tax incentives.”

“We have seen proposals in the past, not only in soccer but in football and baseball, where public finances are used to build facilities for sports teams. We have seen sentiment from this chamber and from government agencies and especially the public, they really don’t want to see public financing of these anymore,” said Hill. “…we really need to do a better job as the House of Representatives, when we see it done correctly that we need to support it, show our support for the private financing of these efforts.”