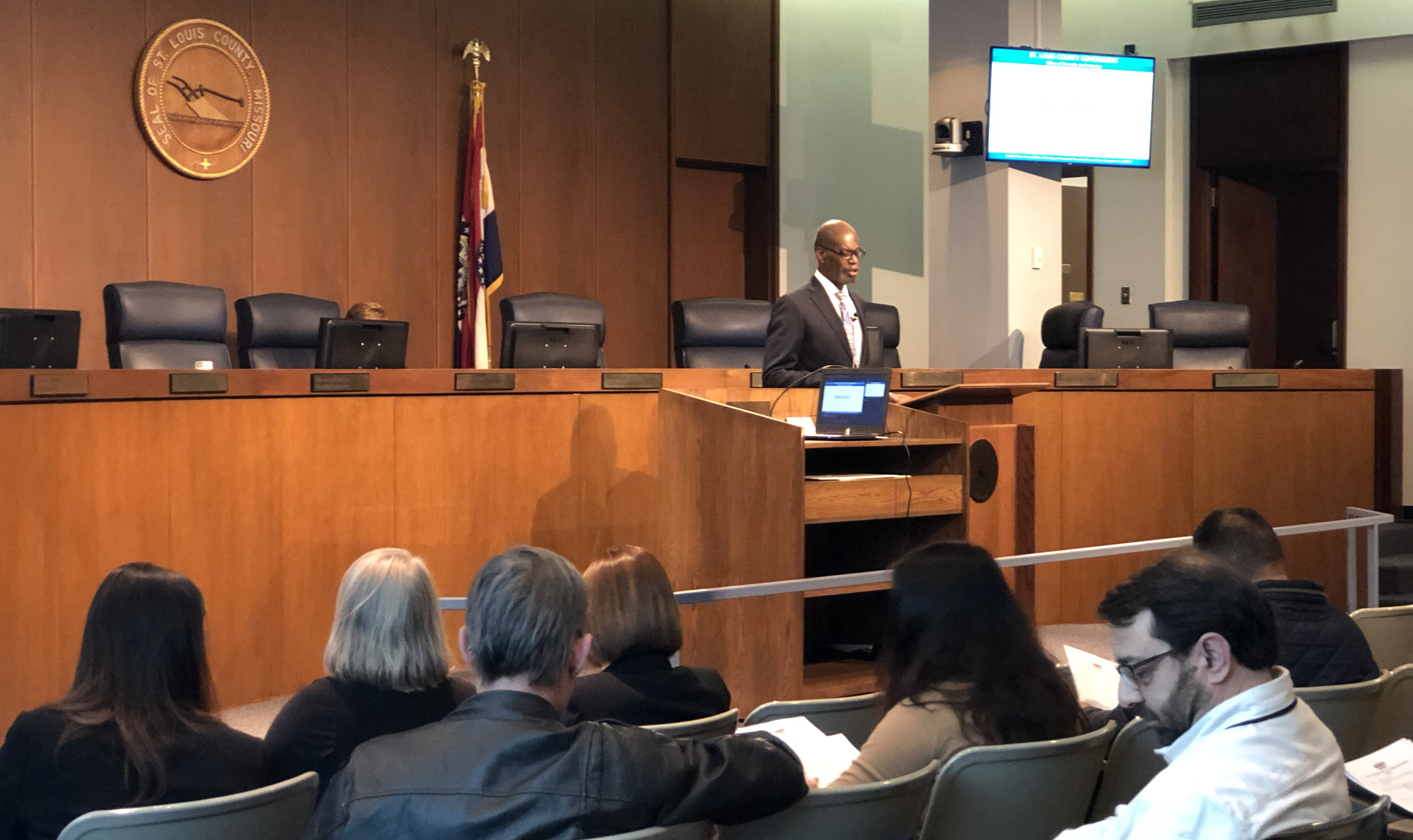 CLAYTON – The St. Louis County Government presented its first-ever Business Diversity Report for the 2018 fiscal year to the public on February 27th.

The report was published after Griffin & Strong PC, an attorney and public policy consultant based in Atlanta, Ga., completed a Disparity Study on behalf of the County. Ethel Byndom was in charge of ensuring that the study got completed.

“Before and during the implementation of the study, there was ample opportunity for local contractors to make their voices heard,” Howard Hayes, vice president of Diversity and Inclusion at Paric, said. “In addition, contacting the office of the Chief Diversity Officer with concerns has always been just a phone call away.”

Within the report, presented by Jack Thomas, Jr., chief diversity officer for St. Louis County, Thomas labels the future goals of the department’s employment as well as its outreach to the minorities, women, and residents of the County.

Thomas was hired in July of 2018 by Stenger. Hayes said that since Thomas’ employment, he has made sure that contracting firms are aware of his open door policy regarding their concerns.

“Mr. Thomas has spent over 20 years as an advocate for MWBE businesses,” Hayes said. “He is well respected and trusted by the rank and file and the leadership of all organizations in the region designed to improve the capability and capacity of MWBE construction firms.”

According to Thomas, the ordinance established within the study requires that the department complete an annual update of the study, conduct a similar to study in support of its workforce goals, and “staff up.”

County Executive Steve Stenger requested $1 million be budgeted to the department to cover the costs of the Disparity Study update, workforce goals study, professional trainings, and employment. Thomas said the costs were determined by looking at other studies done by other departments and the assistance of the County’s Budget Division.

Thomas also mentioned created a Minority Business Development program with Tuck University by bringing the university to St. Louis, identifying specific firms that could benefit from the training, and partnering with other organizations to help offset some of the costs.

“That’s how we got to the million, but the budget didn’t survive the process. We got a little less than half of that for the 2019 fiscal year,” Thomas said. “We’re in the process now with what they call a supplemental appropriation, so we’re going to go back and ask for the money that we didn’t get.”

Additionally, Thomas said the department will continue its construction and construction-related services to build the foundation for an inclusive procurement process. The steps in completing the department’s action plan for 2019 include identifying barriers to MWBE participation; completing program policies and procedures; implementing a comprehensive monitoring and enforcement mechanisms; expanding the program; expanding and increasing outreach efforts; Model Contractors Development program; and establishing benchmarks for County Departments.

Hayes shared that Paric has an “outstanding” working relationship with Thomas. The firm has attended multiple outreach sessions hosted by Thomas and the county’s Diversity and Inclusion Department, as well as duties that Thomas performed in St. Louis City.

Currently, the department is not at the point of adding feedback from MWBE participants into the study, but Thomas said it hopes to be there soon.

“We’ve got a meeting with our website team, so we can build in something there where people can leave comments,” he said. “We also want to some follow up to find out why [businesses] don’t bid to get a sense if it is something that the department is doing or shouldn’t do as a County. There may be some things in the requirements that are burdensome or onerous or just doesn’t make sense, so we need to identify those things. The best way to do that is to get feedback from the folks that we really want to try and get involved.”

Hayes said that the current study reviewed the county’s contracting history during the timeframe of January 1, 2012, to December 31, 2015, found “statistically significant inconsistencies.”

Those inconsistencies were for all minority, women, veteran, and service disabled veteran-owned businesses.

“Paric would like to see future studies show incremental improvement,” Hayes said. “Which means the office of the Chief Diversity Officer must be given the resources necessary to implement study recommendations.”