If you still need eclipse glasses, buying a 12-pack of beer might be your only option

Everywhere you call, they’re out, and eclipse glasses being sold on Amazon at a premium — anywhere from $50 to $80 for a 5-pack, and there’s no guarantee at this point they’ll arrive before Monday. Places that still had them until earlier today are now sold out — REI, Left Bank Books, the St. Louis Science Center, Envision Optical, Clarkson EyeCare, and others. Viviano’s in Fenton tells us they still have a few left for $4 a pair, but that they, too, expected to run out soon. 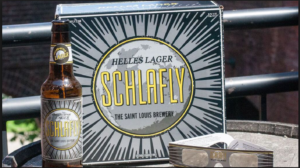 However, you might still find some that come in 12-packs of Shlafly’s summer ale. While they’re sold out at the Taproom at 2100 Locust, there are still some in stock at local Schnucks, Dierbergs, Shop N Save, and Lucky’s grocery stores. But, as Michael Roman, sales representative for Schlafly says, “They’re going fast.”

Roman says several thousand of the special edition 12-packs were produced and distributed throughout Missouri, Kentucky, Illinois, Kansas, and Iowa.

“Outside of Missouri, we’ve sold a lot down in Nashville, Knoxville, Chattanooga,” he said. “I just got off the phone with a rep who sold ten 12-packs from a display at a Target.”

Roman says the marketing plan has been in place for a while, and the Schlafly team is excited about the event. A bus departs the Taproom on Monday for a viewing party in Bloomsdale, Mo., at the Dew Drop Inn.

“Everybody is going to be putting everything down and looking up,” he said. “It’s something we all can share and we haven’t had that in a while.”

1,977 thoughts on “If you still need eclipse glasses, buying a 12-pack of beer might be your only option”