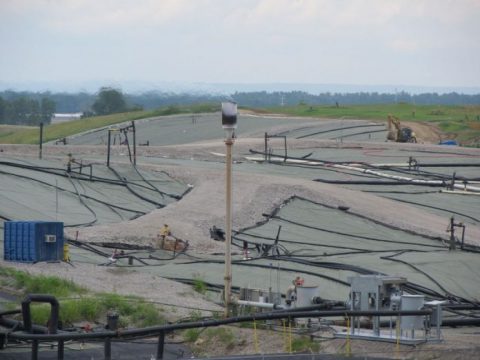 ST. LOUIS, Mo. — The owners of the West Lake Landfill are continuing to try to spread out the cost of the $205 million clean up of the superfund site by adding another adding another entity to the lawsuit they filed last week.

Bridgeton Landfill LLC, a subsidiary of Republic Services, filed an amended petition on Thursday adding EverZinc to the lawsuit in which they are seeking to enlist companies they deem responsible for the nuclear waste to help pay for the cleanup.

“African Metals, today known as EverZinc, sold uranium ore and ore concentrates that the U.S. government used for the war effort. They also retained ownership, for a period of time, of Manhattan Project residues from uranium refining activities. Some of those residues, which were initially stored at the SLAPS site and later at Latty Avenue, led to the contamination of West Lake Landfill,” said Richard Callow, Bridgeton Landfill LLC. “We believe that EverZinc, like Mallinckrodt, should have a seat at the table.”

The U.S. Environmental Protection Agency recently made the decision to move roughly 70 percent of the waste from the site used for disposal for the World War II-era program that produced the first nuclear weapon.

The plan is expected to be carried out within four years and cost $205 million — the owner of the landfill and parties deemed responsible for the contamination will fund the cleanup. Currently, Bridgeton Landfill will share the cost of the project with the U.S. Department of Energy and Cotter Corporation.

Bridgeton filed suit to add Mallinckrodt Chemical Works, the predecessor of Mallinckrodt LLC who processed uranium at its facility in St. Louis that was used in the Manhattan Project, as a responsible party. The nuclear waste from the Manhattan Project was illegally dumped on the 200 acres that make up the West Lake Landfill in the 1970s — before Bridgeton became owner of the site.

The amended petition seeks to add EverZinc, previously African Metals, as a responsible party. In 1944, African Metals provided uranium ore and ore concentrates that were used as part of the Manhattan Project, according to the lawsuit.

The EPA said 8,700 tons of radioactive leached barium sulfate residues from the nuclear bomb program was mixed with 39,000 tons of potentially contaminated surface soil in 1973, long before Republic Services became the owner. The EPA placed the site on the National Priorities List in 1990.