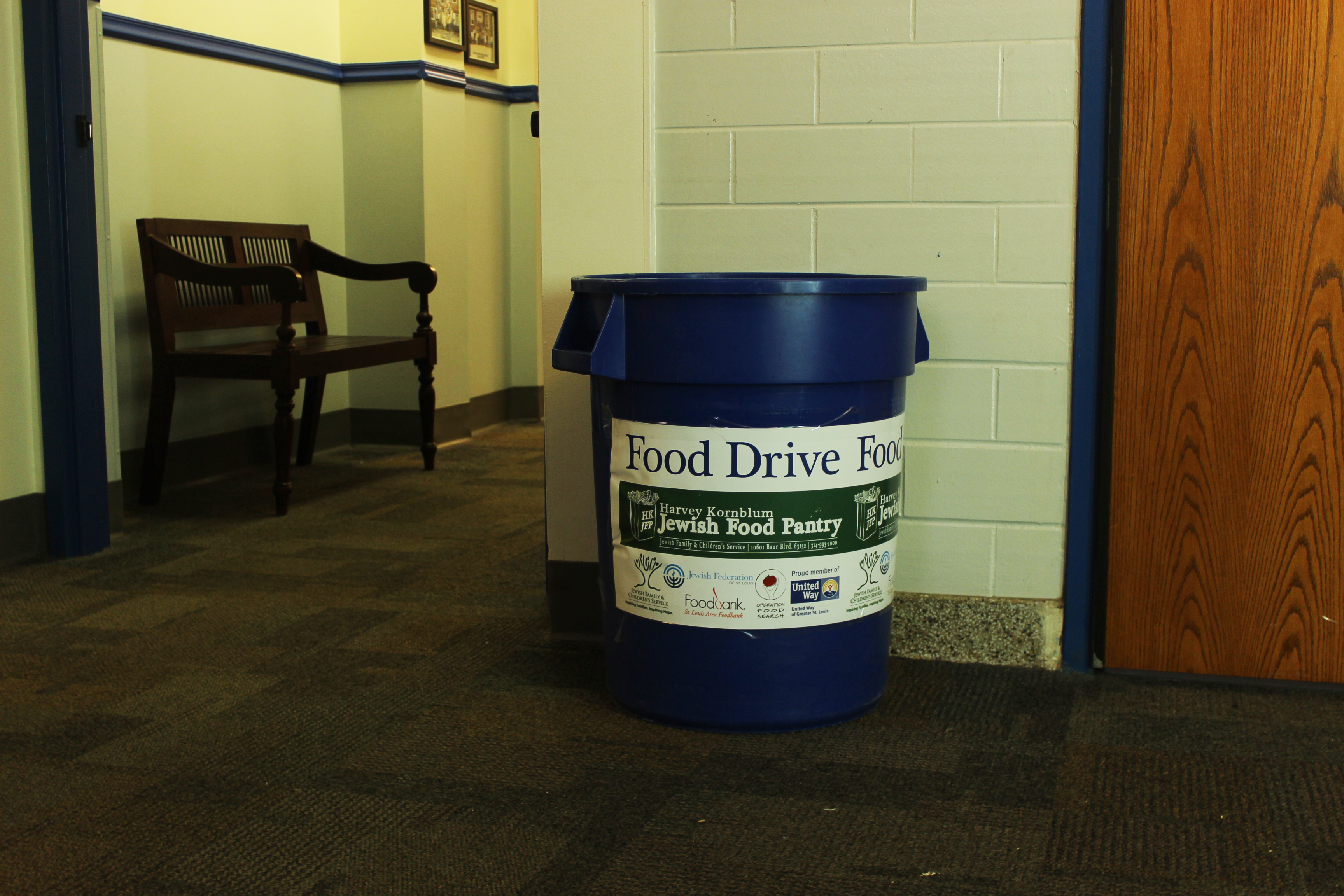 The two Clayton District organizations joined together to host a district-wide toiletries drive to benefit the Harvey Kornblum Food Pantry. CHS and Kid Zone shared that toiletry items are not covered by food stamps and many families have a difficult time in affording basic hygiene needs.

Tyler Kearns, Kid Zone After School Program Coordinator, said seeing the interaction between the high school students with the fourth and fifth grade Future Leaders has been the best part about partnering the two organizations together.

“Just having that older, mentor persona…it’s kind of fun to see that interaction between the two,” Kearns said. “And the community building between the high school and elementary school, to tie in community partnership even though there is a big age gap between the two.”

Sarah Falkoff, science instructor at CHS and co-sponsor of the CHS Community Service Club said that the kids love to be involved and actively do things for the community, other than collecting money.

“No person should be forced to have to choose between eating and being clean,” Falkoff said. “Those are basic human rights, human needs that everyone should be able to do.”

After hosting the Halloween Festival earlier in the school year, Kearns said he got a lot of great feedback from the event and wanted to partner with the Community Service Club because the kids are always looking for new, great things to do.

Knowing that there is a toiletry drive that is done during the fall semester, Falkoff thought about also hosting one in late winter, early spring.

“People only think of people in need around the holidays,” she said. “Wouldn’t it be great if we could do something district-wide where we’re all working together?”

Kearns and Falkoff began throwing out ideas of how to conduct a spring toiletries drive to continue benefiting those in need with the Harvey Kornblum Food Pantry. Students and families in need who attend the Clayton School District are referred to the food pantry by the social workers in the district. Dr. Sheila Powell Walker, the district’s social worker told Falkoff she refers families to the pantry if/when they are in need of more help than the local pantry at the Clayton High School can assist with.

“We figured, if we’re referring families there then our donations should go there,” Falkoff said.

The Harvey Kornblum Food Pantry helps children, seniors and families in the Clayton zip code, as well as throughout the St. Louis area.

To help get the Kid Zone participants excited about the district-wide drive, the CHS Film Club volunteered their time to make a commercial, which was shown to all the elementary students during their morning announcements.

In addition to the drive, students are donating their time at the Kid Zone’s trade bake sale (Meramec Elementary) and craft sale (Captain Elementary) during the week of February 11th-February 15th. All money raised from the sales will go to the Harvey Kornblum Food Pantry along with the other donations.

“[The kids] came up with the idea to do the bake sale and I pretty much supplied them with the ingredients and the stuff that they need, the time to do it, and they took it and ran with it,” Kearn said. “We even had kids who made stuff at home over the weekend and brought them in for the bake sale.”

Kearns said his biggest part in the drive was explaining to the younger age level what toiletries were and why people are in need of them at food pantries.

“Once they got the reasoning behind it, they took it above and beyond,” he said.

Gwen Krieger, a fourth grader at Meramec Elementary and Kid Zone Future Leader Club member, said it was a lot of fun to make and decorate the items that they are selling at the bake sale.

“My favorite part is when we’re actually selling the items,” Lauren Trodus, a fifth grader at Meramec Elementary and Kid Zone Future Leader Club member, said. “We always get really funny and it’s always a big fiasco whenever all the future leaders are here.”

Krieger, Trodus and Sofia McCousin, a fifth grader at Meramec Elementary and Kid Zone Future Leader Club member, all agreed that the biggest lesson they have learned from this district-wide toiletries drive is that not everyone is as fortunate as they are.

“I came back to Meramec [to help the Future Leaders] because I went here for elementary school and I love to get on any community service opportunity I can,” Anna Rubin, junior at CHS and Community Service Club officer, said.

Donations can be dropped off at any of the designated donation bins, labeled Harvey Kornblum Food Pantry, located at the district’s school buildings from February 4th until February 22nd. Community members are welcome to bring their donated items to the high school’s globe entrance or Administrative Center, as they will be more accessible to get to. Monetary donations can also be mailed to the Clayton High School, Attn: Sarah Falkoff.

Donated toiletry items include soap; body wash; shampoo; deodorant; toothpaste and toothbrushes. Although the focus is toiletries, there have been donations of food items as well. The organizations said they will take anything and everything that will help people.

Currently, the toiletries drive as received over $50-$70 in donations. In terms of bulk items, the organizations are waiting until the end of the drive to bring all the donation bins together.

“It’s been so great to partner with Kid Zone and the kids are really excited,” Falkhoff said. “It feels so good to do wonderful things for people, especially outside of the holiday season. Nobody should have to be forced to either eat or be clean.”