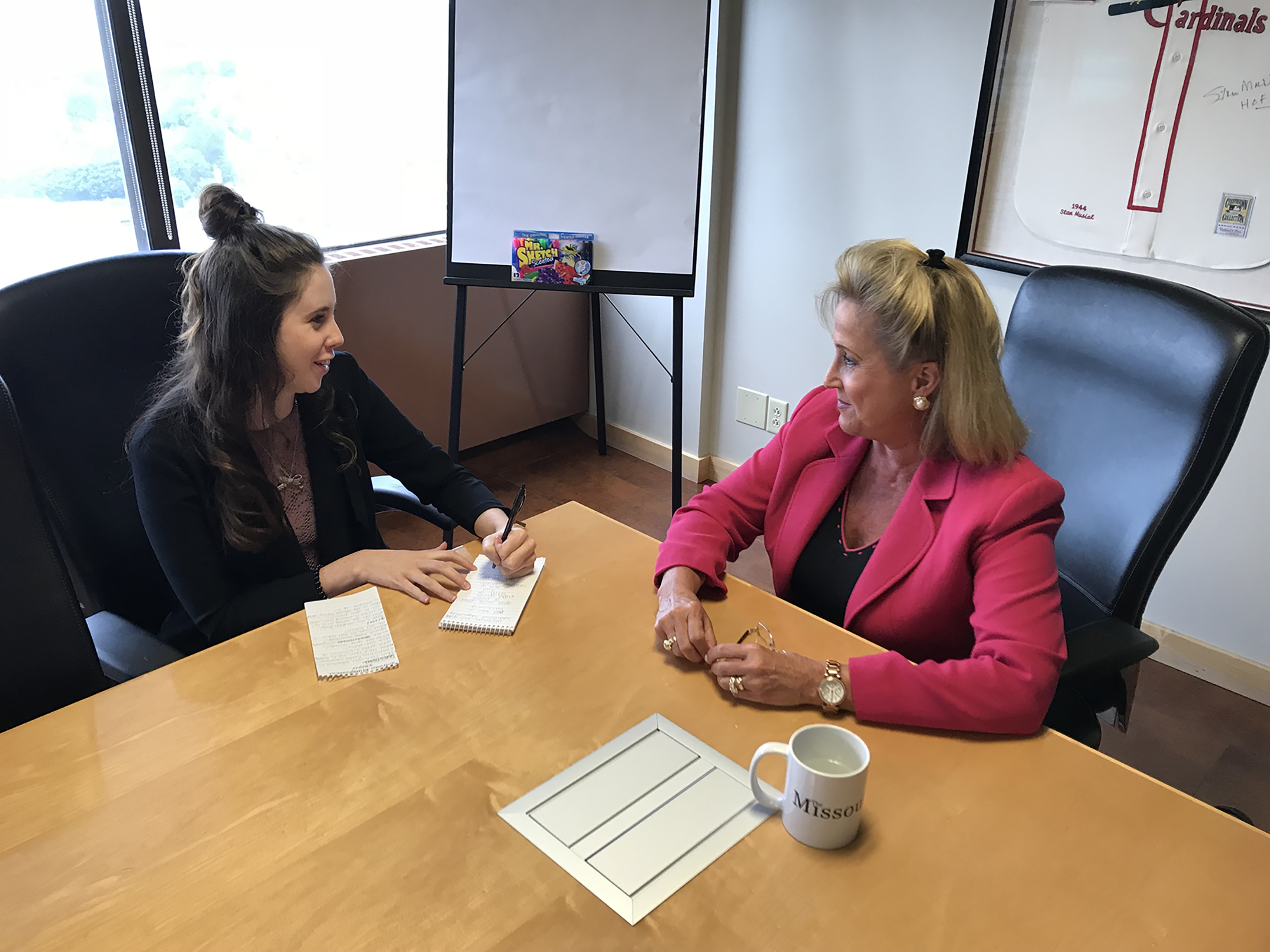 CLAYTON – We had the opportunity to sit down with Congresswoman Ann Wagner, 2nd Congressional District of Missouri, to discuss her re-election campaign and what she hopes to continue to work on in Washington.

CLAYTON TIMES: How have you adapted to a nationally funded campaign?

WAGNER: In terms of the funding in my campaign, I’ve raised all that myself and it takes resources to get your money out.

At the front of the level, we have strict limits in terms of what any one individual can give you. It’s much different than the state. You have to run it, it’s all transparent, it’s all afforded. The most any one individual can give you per cycle is $2700. We raise it in small chunks, a little at a time. We haven’t had any outside groups, I don’t think, come in on Republican or Democrat side of the aisle.

Obviously, there are national issues that shape the dynamics of a campaign.

In terms of funding, this has all been our hard work. To me, it’s also a testament to the support that you have. When you’re out, whether you’re going door to door or making phone calls or grassroots or you’re raising funds, you’re talking to real people, real concerns, real issues and real families, real businesses. I consider it a part of the kind of things you have to do in order to get re-elected and to get your message out. You can’t rely on outside groups or even the media to get your message out. You gotta do it yourself.

CLAYTON TIMES: What has it been like to serve under a president of your own party?

You’re able to sponsor legislation and actually pass legislation that gets signed into law. Things like FOSTA, the online sex trafficking act, that are maybe such a difference in saving lives across our country of those that have been sold into sex slavery.

A lot of the regulatory reform work that we’ve done in Financial Services that has been signed into law. I’ve had foreign affairs bills that have been signed by the president. When you’re serving with the president you’re able to advance the kind of policies and programs that have helped this economy, this pro-growth economy.

The things that we have been able to do in the defense area. For the readiness of our troops for the first time in well over a decade. Whether it’s giving our soldiers a well-deserved pay raise, for the first time in years, whether it’s 24 new Super Hornets up at the Boeing Plant right here, the NGA facilities. We watched the National Geospatial, just to watch it break ground, to be able to fund that. The national defense issues have been very rewarding to pass. Our Veterans, what we have been able to do for them in terms of the VA Accountability and VA Mission, which is just a veteran’s choice in terms of really getting them the kind of services they need in expedited fashion. Taking care of those that have fought for our liberty and our freedom.

What we have been able to do for the economy. Whether it’s a combination of regulatory reform and let people keep more of their hard earned money through some tax relief that is needed. It’s been very gratifying to see how the policies and the pieces of legislation – well over 850 that the House has passed – 850 different pieces of legislation that we passed to the US House, not all of them have made it to the Senate, but many have been signed into law. And that’s a difference.

President Trump [and I], we share an attribute of being people of action. We want to get things done. A lot of energy and constituent services are very important to me and I’d say that that is part of the biggest difference of our good ideas, our policies are actually getting signed into law. And that’s probably the biggest advantage.

CLAYTON TIMES: What are your thoughts on the allegations against Judge Kavanaugh?

WAGNER: They’re serious allegations and they need to be taken seriously.

I hope that the professor, Ms. Ford, who has put forward these allegations is going to come and to raise her right hand under oath and talk about that to the Senate Committee next week. Certainly, she’s indicated that she’s going to do that, I hope that is the case. She needs to have her day to put forth her allegations, her concerns for the Senate Judiciary Committee.

And certainly, Judge Kavanaugh should have the ability to respond to those in kind. I want it an open process and one that is fair.

I think Senator Grassley, the Chairman of the Judiciary Committee, has handled himself with great grace and compassion in saying we’ll do a closed door, we’ll do it open, we’ll do it in public, we’ll come to you, we’ll make any accommodations. So that this board can have her concerns addressed.

I don’t want to see this politicized anymore than it has, the entire process. I think some of the hearings were sad for our institutions to watch, even prior to this, and I hope that everyone can have their voices heard and that we can move on to a vote and have him sit on the court.

CLAYTON TIMES: If elected to another term, what will be your priorities?

WAGNER: We’re going to continue the pro-growth economic agenda that we’ve started here in the first term of President Trump.

I have additional human trafficking and sex trafficking legislation that I’ll be advancing. We certainly are going to continue our work on kind of red tape in the bureaucracy of the federal government, something that I think we will be focusing on.

And restoring as much freedom and liberty back outside of the federal government, back to the states and local jurisdiction. I believe in government that’s closest to the people and I will continue to advance legislation that does that.

We’re going to continue to take care of our national defense needs and our veterans, which are very near and dear to my heart.

I’m hoping that we also will continue to fight this opioid epidemic. With 72,000 Americans who died of an overdose through narcotics, heroin, opioids and thintenaul over the last year. That is a national epidemic.

Those are some of the things that I hope we are going to be able to advance in the 116th Congress if I am so privileged to be returned to office by my constituents.