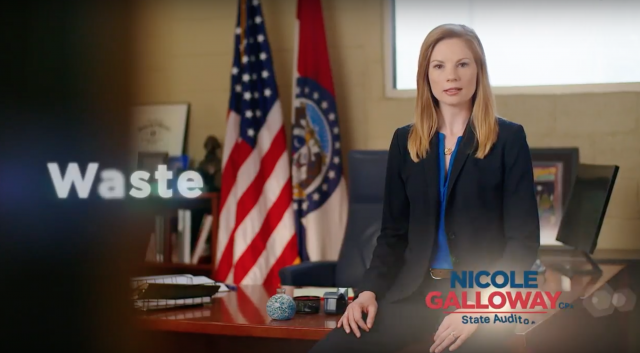 JEFFERSON CITY — In her bid to retain her post as Missouri State Auditor, Democrat Nicole Galloway has launched her first broadcast television advertisement.

Going head-to-head in the hotly contested race with Republican candidate Saundra McDowell, Galloway used the ad to highlight her tenure as auditor since she was appointed to the position in 2015 following the death of Tom Schweich.

“Waste, fraud, abuse – these aren’t just words to me. These are violations that cheat taxpayers and what I uncover every day as Auditor,” Galloway notes in the ad. “I’m not a politician, I’m a CPA, a Certified Fraud Examiner, and a mother of three.”

Eric Slusher, Galloway’s campaign spokesman, said that the advertisement will run through election day and several more ads will be released in the coming weeks.

As of the most recent financial reports to the Missouri Ethics Commission, Galloway’s campaign had $1.2 million cash-on-hand compared to McDowell’s roughly $5,000 cash-on-hand.