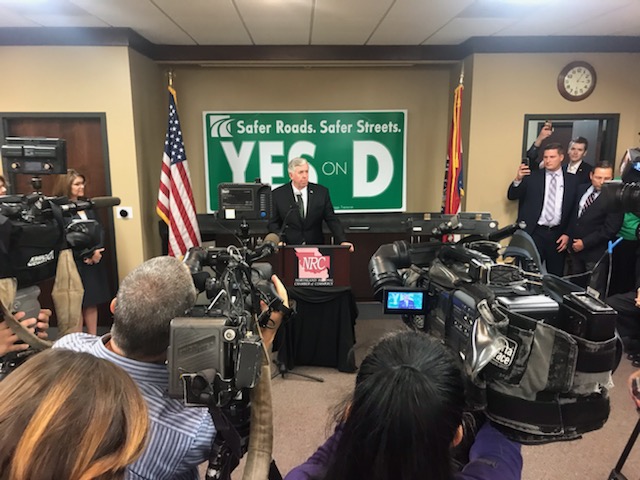 KANSAS CITY, Mo. – Gov. Mike Parson hit the campaign trail Wednesday in support of the SaferMO.com campaign. The campaign, hoping to pass Prop D on the November ballot, is pushing for a gas tax increase to increase funding for roads and law enforcement.

“The reality is we’ve got a problem,” Parson said to a crowd of about 100 at the Northland Chamber of Commerce. “We’ve got over 1000 bridges that are considered in poor condition. When you look down and can see all the way down, that’s a problem.”

The crowd included many members of the regional chamber and unions, as well as some local elected officials. Parson gave the representatives of the unions and building trades a nod, saying the roads are not Republican or Democrat, but Missourian. Parson also gave a nod to truckers, saying they’re an important part of keeping Missouri’s economy mobile.

Those in attendance included Kansas City Councilmembers Jolie Justus and Scott Wagner, state Rep. Kevin Corlew, Alise Martiny from the Kansas City Building Trades, representatives of the Missouri Realtors, and members of CWA and AFL-CIO, among others.

“Today we’re getting ready to embark on that last mile,” Parson said, alluding to the days between the event and Election Day.

Beyond voting “yes” on the proposition, Parson called those in the audience to take a step further and go out and work to get others to do the same.

“We’re going to be working our tail end off here and I want you to do the same,” Parson said. “Are you willing to go out there and tell others how important this is to the state?”

The Governor outlined that Missouri has the 7th largest highway system in the country, but is 49th in the nation in funding those roads, only above Alaska. He said the average voter drives 12,000-15,000 miles a year. Additionally, Parson noted that over 20% of the funds coming in would be from out-of-state travelers, meaning over 20% of the fund would not come from Missourian’s pockets.

“There have not been very many governors out in front of a tax increase,” Parson said. “The last time was one of the most conservative governors the state has ever had and that was John Ashcroft.”

Parson said the legislature has continually delayed a transpiration solution because of the unpopularity of tax increases, but said, “Sometimes you have to make a choice. Sometimes you have to really take a look and see what is important for our future and what we need to do for them.”

Parson said the proposition is vital to make sure the future of Missouri is a good one, saying we must pass the measure for our children, including the event’s cheerleaders.

The event was opened up by a small group of young girls who welcomed those to the rally with a cheer of, “Hi, hello. How are you? The Northland Chamber welcomes you!”

“You all have one of the best cheerleading groups I’ve ever seen,” Parson said, noting that it’s not often there are cheerleaders at his stops around the state.

The Governor made one last important rallying cry, coming back to the mic to say, “How about them Kansas City Chiefs!?”

The spur was met with applause and cheers.

Prop D is one part of the Governor’s plans to prioritize workforce development and infrastructure during his tenure as governor.