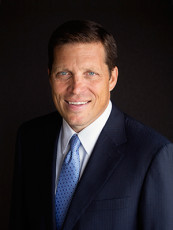 JEFFERSON CITY, Mo. — The Chairman of the Missouri Republican Party said that he has completed the mission he started out with: leaving the party in a better place than it was when he arrived.

In a statement, Todd Graves touted the strength of the GOP in the Show-Me State as his term in leadership comes to an end.

“As my term as Chairman comes to an end, I have no doubt that the party is in a better position than it was when I arrived, and 2020 should bring just as much success, if not more,” he stated.

Graves was elected to serve as chairman of the Missouri Republican Party in January 2016, replacing John Hancock, who also served two years in the role. Hancock took the job after former-chairman Ed Martin left the position after two years.

The Kansas City lawyer, a partner at the Graves-Garrett law firm and former-U.S. attorney who was appointed by then-President George W. Bush. He was twice elected as Platte County prosecuting attorney. His brother, Sam Graves, serves in Congress.

“When I came to the Missouri Republican Party over two years ago, I had a simple mission. I wanted to leave the party in a better place than it was when I arrived,” Graves stated. “We’ve done that, and then some.”

He pointed to Missouri Attorney General Josh Hawley’s win over U.S. Sen. Claire McCaskill to represent the state in the U.S. Senate, all Republicans in Congress being re-elected to the House, and the state legislature maintaining it’s supermajority.

Not only did the GOP hold on to their supermajorities, but they didn’t lose one net legislative seat in the midterms, Graves noted. At the same time, Republicans lost 300 state legislative seats across the country.

He contributed the success to the “aggressive” grassroots effort along with the dedicated staff, volunteers, supporters, and generous financial backers that helped the party reached “a staggering two million voters and knocked on a record one million doors.”

“While other parties struggled throughout the past two years, the Missouri Republican Party has emerged as one of the most successful state parties across the country – an example for others to follow,” said Graves.