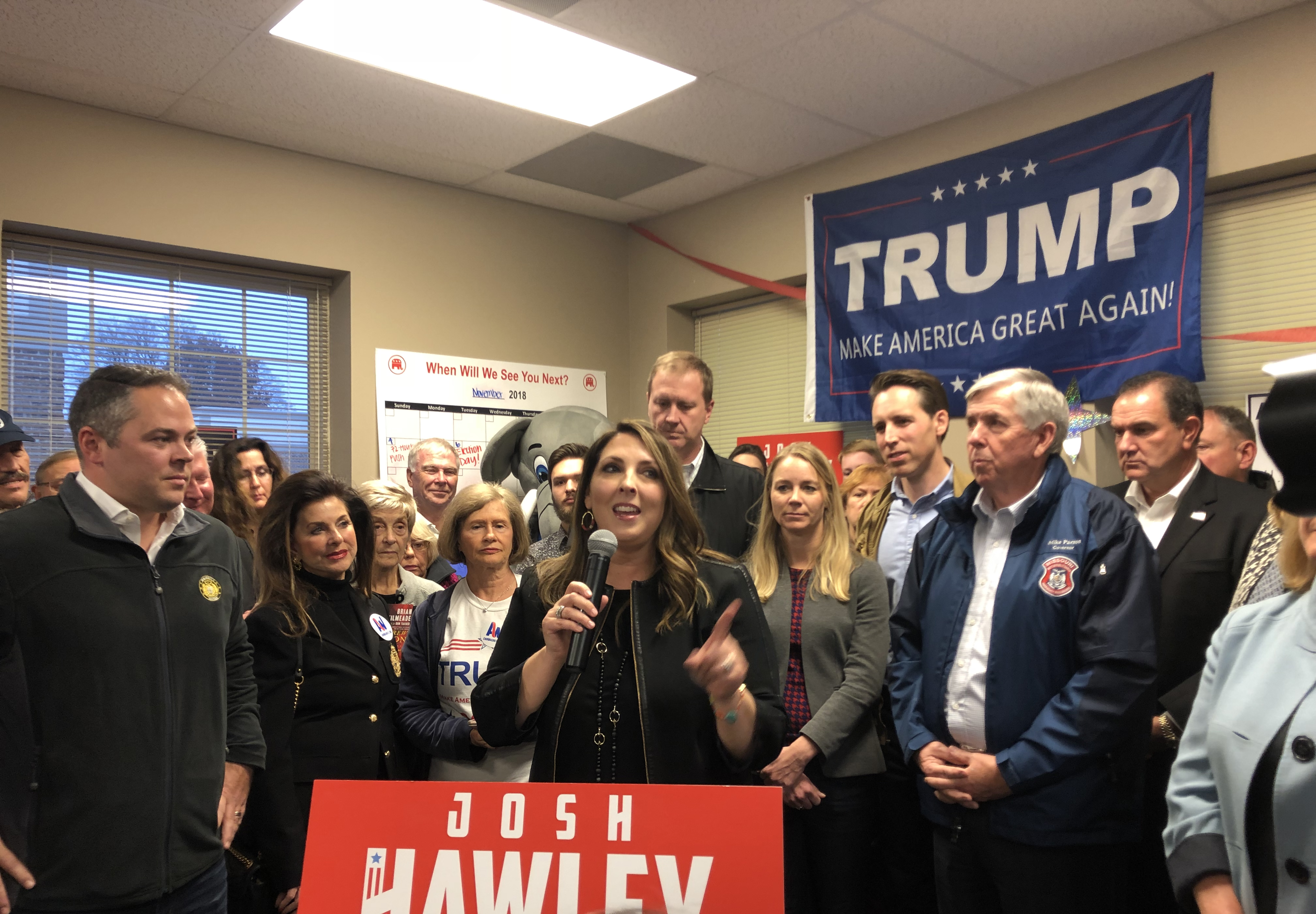 According to the polls, this race could be anyone’s for the taking. Some polls show Hawley up while others show McCaskill winning and some, like Missouri Scout, have that race at a tie – most polls are within the margin of error.

In the last day of campaigning, Hawley has made stops in Springfield, Jefferson City, Blue Springs and St. Louis. Hawley will be ending the day in Cape Girardeau, where President Trump will join him – his second visit to Missouri in less than a week.

The rallies throughout the day and in St. Louis showed that Missouri leaders Gov. Mike Parson, Lt. Gov. Mike Kehoe and Missouri State Treasurer Eric Schmitt are behind Hawley’s campaign.

Schmitt and Kehoe both noted how important Tuesday’s election is. Schmitt mentioned that McCaskill does not represent who Missourians are, but Hawley does and that is why Hawley is the choice for Missouri.

“Josh is there to represent you,” Kehoe said. “Represent the heartland with Christian values in the U.S. Senate.”

“Welcome to the 2nd District,” Wagner said. “This is where elections are won or lost and we are winning!”

Wagner mentioned the “unsung heroes” who have been working non-stop since the spring. She said that at the end of the election, they will have a total of over 300,000 voter contacts.

“This is absolute go-time,” Wagner said. “Get this job done, retire Claire McCaskill and keep up the majority.”

Missouri voters decked out in GOP shirts, hats, stickers, signs and pins, made for a big turn out with hours left before the election. Parson even mentioned that it was the biggest crowd that they had seen so far on Monday.

“Tonight and tomorrow are critical for all of us,” Parson said. “We truly do have a chance to change history. We have a chance to change our values that we’ve all grown up within this state, to make sure those values are protected. The only way we can protect Christian values, moral values, the love of this state and the love of this country, the only way we are going to get those done and be able to keep those things is by electing Josh Hawley to United States Senate.”

Parson said that the values have been passed down from generation to generation and that it is the people of Missouri’s time now to make sure that those traditions are kept. He said that McCaskill is not the person that cares about Missourians. He also said that the way elections are won is by people reaching out and talking. “You have to go out and work for it,” Parson said.

McDaniel noted that President Trump is spending his last rally in Missouri and how exciting that is for the state.

“This isn’t about numbers, it’s about people’s lives,” McDaniel said. “People lives are better because of Republican leadership… If we can win Missouri we can keep this comeback going for our country, we can make people’s lives better and that is what we’re fighting for.”

Hawley said that on Tuesday’s election it is all going to come down to Missouri. He said that this is the biggest Senate race in the nation.

“What we do tomorrow, how we vote tomorrow, is going to determine, not just the future of the U.S. Senate, but the future direction of this country,” Hawley said. “It used to be said ‘so goes Missouri, so goes the nation’. For a hundred years, every president we’ve voted for became president.”

Hawley said that the more that he listens to McCaskill, the more he is reminded of Hillary Clinton. He then went on to list all of the similarities between McCaskill and Clinton. The crowd even joined in with him saying ‘just like Hilary’ after each similarity was listed.