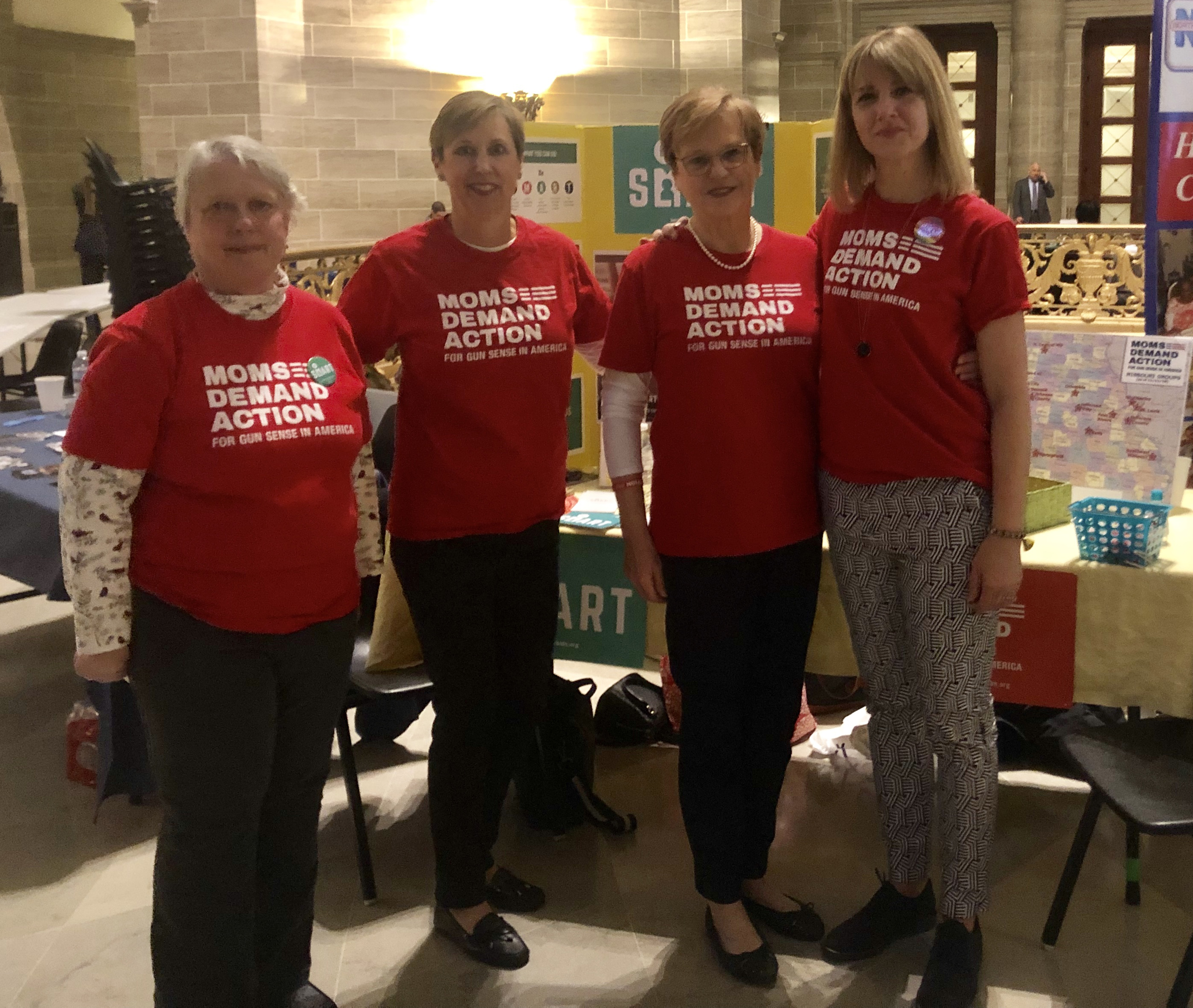 JEFFERSON CITY – Moms Demand Action for Gun Sense in America, a grassroots movement, has a chapter in Missouri of local mothers and volunteers fighting for public safety measures.

This week, volunteers of the organization had a table in the Capitol’s rotunda, where they shared more about the movement to reduce child gun deaths, in addition to speaking with legislators.

“We’re here today to make sure that lawmakers hear from us and that we hear from them about where those bills are,” Kristin Bowen, local group leader and founder of Columbia’s site for Moms Demand Action Missouri Chapter, said.

In previous years, the organization has only visited the Capitol on their advocacy day, the one day a year that lawmakers are sure to see them, and hearings dealing with bills they are fighting.

“We come twice a month through the whole session,” Bowen said. “This year, we’ve been coming to the Capitol with volunteers from across the state. It’s kind of an amazing growth in our statewide chapter to go from the larger communities in our state to having a Local Group in some more remote, rural parts of our state.”

In the 18 Local Groups, leaders will hold monthly meetings as well as education and training through the Be SMART program and outreach or events in the communities about the issues. For the groups who are in smaller parts of the state, the organization uses social media to connect as well as meetings twice a month to coordinate at a larger level and discuss the organization’s priorities.

The organization’s biggest campaigns is Be SMART. Secure all guns in your home and vehicles; Model responsible behavior around guns; Ask about the presence of unsecured guns in other homes; recognize the risks of teen suicide; and Tell your peers to be SMART.

Cathy Gilbert, of Ballwin, is one of the volunteer presenters of the Be SMART program. She, like other Moms Volunteers, go out into the community to share the program whether through presentations, at PTA meetings, or in pediatricians offices.

“We go wherever they’ll have us share this safety information,” Bowen said. “That’s what we table with at the rotunda as volunteers.”

For Moms, it’s about being visible in the Capitol. Volunteers come so they can talk to their lawmakers, but also other people who are visiting the Capitol to share the message of what they are doing and what their “side of the issue” is.

The organization comes twice a month to the Capitol to table at the rotunda so that lawmakers see them more than once a year and a discussion can be had about the legislative priorities that are shared with Moms across the state.

So far for 2019, Moms have been to two hearings, one in the House and one in the Senate. At the hearings one volunteer will offer an official testimony on the bill, explaining why they oppose it as an organization.

Earlier this session, the organization was focused on HB 2167, sponsored by Representative Tracy McCreery, D-District 88, which “prohibits certain individuals from possessing a firearm due to domestic violence and requires police officers to remove firearms at the scene of a domestic violence call.”

Currently, the organization is closely following a bill they refer to as “Guns Everywhere,’ HB 258 and SB 121.

“Basically, what it would do is remove a long list of places where it’s currently restricted, you cannot conceal carry…importantly, it covers bars, college campuses, daycare centers, hospitals,” Bowen said. “All these places that we consider to be very sensitive places where you currently can’t bring a gun, under this bill you would then be allowed to.”

Bowen shared one of the benefits of being in the Capitol is scheduling days to talk with people who are in attendance for their own advocacy days. By doing so, volunteers are able to show people where meetings are held once a month in areas close to where they are from and connecting them to what Moms is doing.

“People just don’t always know that we are in their community already working on the issue,” Bowen said. “That’s actually what I love about doing this, this year.”

When Bowen was last at the Capitol volunteering, she said physicians were excited to learn about the safety program and asking if they could share the information with patients in their family practice.

While it is exciting for the organization to get more people interested in their movement, Bowen noted that it is also an emotional issue.

“Whenever there is a horrific national, or now an international event, like what happened in New Zealand, we find new people coming to this movement who are looking to make change,” Bowen said. “And it’s really hard, it’s really emotional.”

Legislatively, Bowen said it is hard for the organization to work on the gun issue in the state. She mentioned that gun lobbyists have gotten a several-decade head start on the organization and lawmakers tend to trust the voices that they have continuously heard for all these years.

The organization is full of volunteers including survivors of gun violence turning their stories into action, gun owners, and moms wanting to reduce child gun death.

“We’re not anti-gun, we’re anti-gun violence,” Bowen said. “Having those conversations is hard…We’re here, bringing Moms, to build relationships, which is a long term thing. We’re not trying to take away anyone’s rights, but encourage people to think about the responsibilities that come with those rights.”

Moms is consistently working to build lasting relationships with its lawmakers and community members to better work on “common sense measures.” Focusing in trimesters, this trimester, the organization is fully focused on the legislative priorities and fighting HB 258 and SB 121.