ST. LOUIS COUNTY — This past week, the Metro Air Support Unit received one of the highest honors bestowed on Law Enforcement Agencies with airborne capabilities, according to a press release from St. Louis County Police. The Public Safety Aviation Accreditation Commission, (PSAAC), an affiliate of the Airborne Law Enforcement Association (ALEA), recognized the Unit as having achieved reaccreditation from the PSAAC assessors who conducted an on-site assessment in June of this year. 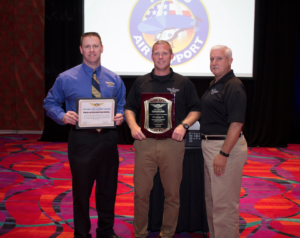 Our Metro Air Support Unit is the first multi-agency unit in the nation to have accomplished accreditation in 2014 and now reaccreditation in 2017. The standards evaluated are divided into five major areas of consideration: administration, flight operations, safety, training, and maintenance. This award and recognition demonstrates our commitment to providing the highest level of service and dedication to all of these standards.

The recognition and awards were presented last week to the supervisors of the Metro Air Support Unit during the ALEA Annual Conference and Exposition in Reno, NV.

The PSAAC accreditation program offers an opportunity to enhance our reputation and the public’s confidence in our personnel and air operations.