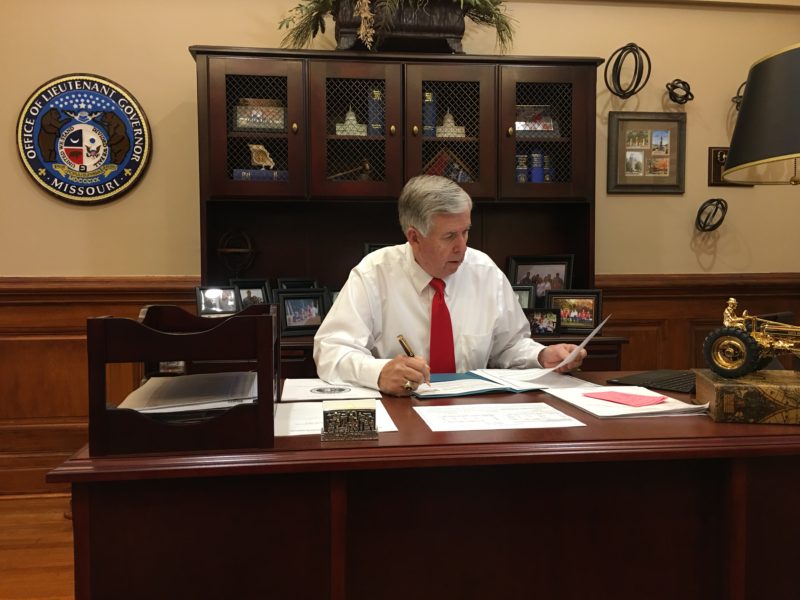 WASHINGTON, D.C. – On the eve of ceremonies honoring St. Louis World War II pilot John G. Kriegshauser and his B-17 crew for sacrificing their own lives to save English school children, Governor Mike Parson presented the British Ambassador to the United States with a proclamation honoring 82-year-old Tony Foulds for his tireless efforts to preserve the legacy of the heroic American crew.

On February 22, 1944, their aircraft severely damaged by Nazi fire near Denmark, Lt. Kriegshauser and nine crew members were struggling to return to an English air base and losing altitude over Sheffield, England. Their plane circled a field in Sheffield’s Endcliffe Park, but Lt. Kriegshauser, spotting children below, selflessly chose not to attempt a landing out of concern for children playing there. Instead, the bomber, known as “Mi Amigo” crashed into a wooded area of the park. There were no survivors.

Tony Foulds, age seven at the time, was one of the children playing in the park. He told the Associated Press recently, “I can’t see anyone else ever doing what these lads did – giving their own lives for a foreigner.”

For most of his nine decades, Foulds has worked to preserve the legacy of Lt. Kriegshauser, of St. Louis, and his “Mi Amigo” crew. On Friday, February 22, both the U.S. Air Force and Royal Air Force will perform flyovers as part of the 75th anniversary commemoration in the Sheffield Park that Foulds has championed. The U.S. Air Force aircraft performing Friday’s missing-man formation flyover will be four St. Louis-built F-15E Strike Eagles.

Foulds has worked for decades to maintain the park’s monument to the American crew and to tell their story.

“St. Louisan John Kriegshauser’s actions that fateful day in 1944 are yet another example of why his is known as the Greatest Generation,” Governor Parson said. “Lt. Kriegshauser was only 23-years-old but had already flown 15 missions to defeat the Nazis and free people from tyranny. He and his crew acted selflessly to save innocent lives; Tony Foulds has acted nobly to preserve their tremendous legacy. Actions like Tony’s help strengthen the Special Relationship between the United States and United Kingdom.”

Governor Parson, who is in Washington attending the National Governor’s Association’s winter conference, met with British Ambassador to the U.S. Kim Darroch to present the proclamation Thursday night.

Ambassador Darroch said, “The courage of those 10 men on that day will be remembered – and not just by the children in the park whose lives were spared, but by the whole of the United Kingdom who will always be grateful for their sacrifice.”

Governor Parson’s proclamation honoring Tony Foulds for his work to continue the legacy of Lt. Kriegshauser and the Mi Amigo crew will also be presented to Tony Foulds in England.

The proclamation can be viewed here.