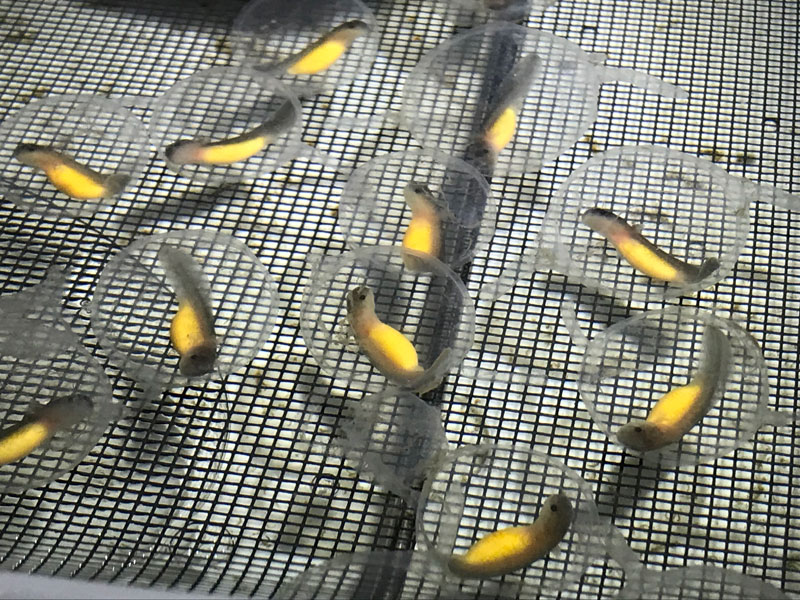 A historic achievement in conservation for this endangered species

ST. LOUIS, Mo. – The Saint Louis Zoo, the Missouri Department and Conservation and U.S. Fish & Wildlife Service announced the historic achievement in hellbender conservation with the hatching of the second-generation zoo-bred endangered Ozark hellbenders at the Saint Louis Zoo on Tuesday.

Since Oct. 6, 2018, 39 hellbenders have hatched at the Zoo’s Charles H. Hoessle Herpetarium.

“The Saint Louis Zoo has been a great partner in amphibian conservation for over 40 years,” Jeff Briggler, Ph.D., State Herpetologist with the Missouri Department of Conservation, said. “We are hopeful that the first generation of Saint Louis Zoo-bred hellbenders now living in Missouri rivers are equally as successful in reproducing.”

The Zoo’s 7-year-old, first-time father of these baby hellbenders is somewhat of a celebrity salamander. This male and his clutchmates were the results of the world’s first successful captive breeding of Ozark hellbenders in Nov. 2011 at the Zoo. The Zoo reported that this is the first time any of the Saint Louis Zoo-bred, first generation animals have successfully bred.

“This is truly a milestone and a credit to the expertise of our dedicated and caring Herpetarium team,” Lauren Augustine, Curator of Herpetology at the Zoo and Director of the Saint Louis Zoo WildCare Institute Ron Goellner Center for Hellbender Conservation, said.

In fall, a male hellbender sets up a nest site under a large stone and waits for a female to enter and deposit her eggs to be fertilized. The male defends its nest until the eggs hatch into larvae.

Around mid-Sept., in the Zoo’s outdoor simulated streams, two female Ozark hellbenders, that came to the Zoo in 2011 as newly hatched larvae from Missouri Department of Conservation Shepherd of the Hills Fish Hatchery, laid a total of 301 eggs in nest box that was guarded by a male that was bred and hatched at the Zoo in 2011. Of those eggs, the Zoo reported that 43 were fertile and were moved to climate- and water quality-controlled trays behind the scenes at the Herpetarium where they are being cared for by staff members.

According to a press release, breeding of this species has occurred at the Zoo annually from 2011 to 2016, resulting in 6,586 Ozark hellbenders eggs, which produced 5,183 successful hatchlings.

“To know that the animals, which were bred, hatched and raised in our care, are no able to successfully reproduce is amazing,” Augustine said. “It means that we’re on the right track and that there’s hope for this species as a whole.”

Dr. Briggler said that the rivers in south-central Missouri and adjacent Arkansas were estimated once to support over 27,000 Ozark hellbenders.

Because of the drastic declines of wild populations, captive propagation become a priority in the long-term recovery of the species, according to the press release. Once the captive-bred larvae are 3 to 8 years old, they can be released into their natural habitat: the Ozark aquatic ecosystem.

The Saint Louis Zoo said that they are also head-starting juvenile Ozark and eastern hellbenders, hatched from eggs collected in the wild, for future release. The success of a test release in 2008 suggested to the Zoo that captive-raised hellbenders can survive in the wild. Since 2008, the Zoo reported that a total of 5,792 juvenile Ozark hellbenders and 319 eastern hellbenders reared at the Zoo have been released into the wild “to augment remaining populations in six different rivers”. The Missouri Department of Conservation staff members are monitoring the success of these released animals in the wild.

Currently, the Saint Louis Zoo says that they are head-starting 2,112 juvenile hellbenders for future release.