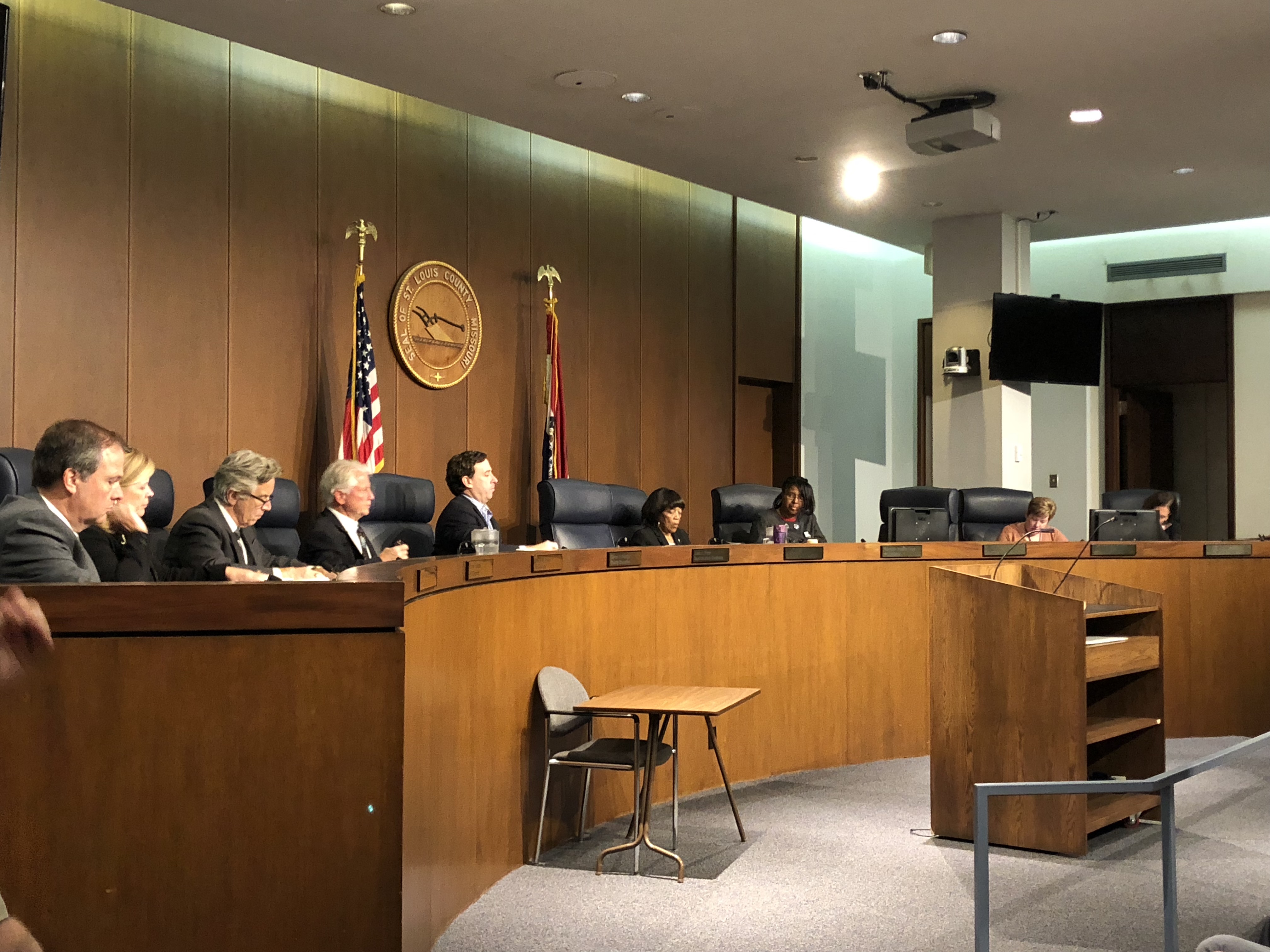 CLAYTON, Mo. – St. Louis County Executive Steve Stenger and the council members made preliminary plans for a meeting to discuss next year’s budget in terms of raises for the county workers at Tuesday evening’s meeting.

During the public forum, Pam Simpson, George Carroll, Karen Palazzola and Ashley Greely all spoke before the council members about the budget freeze for the county workers, asking the council for fair treatment.

“Taxpayers dollars are being used for things that they were not intended for,” Simpson said. “We are not asking for Prop P funds. We are asking for fair and equal treatment.”

Carroll explained that they are the only group that works after hours, weekends and holidays as well as with the public, secretaries, judges, lawyers and inmates.

“[It’s becoming a more] deteriorating and dangerous place for everyone to work and something needs to be done,” Carroll said.

Palazzola, a 15-year employer with the Collector of Revenue’s Office, said that she received a promotion last year, but because of the budget freeze she was told she would only able to receive a 1 percent increase.

“I ask the council to please consider a raise for all employees to keep the dedicated workers,”
Palazzola said.

“Small things add up when your salary doesn’t change with the times,” Greely said. “We are asking for the leadership in charge of St. Louis County to take notice of our dedication to serving this county and its residents. We ask you to recognize our hard work and realize that a wage freeze is a talent freeze.”

Councilwoman Erby said that she was happy to see the workers at the meeting. She said that she thinks it is time for something to be organized and done for the county workers.

Resident, Tom Sullivan spoke about the Proposition Z proposal being on the ballot for Nov. and voters not knowing a lot of information on the proposal.

“I think St. Louis County voters are entitled to answers before they vote on Proposition Z,” Sullivan said. “The county put this proposal on a ballot without doing the necessary diligence and I think you owe it to voters to provide answers to these questions on the financial statements.”

Before moving on to the next speaker, Councilman Trakas asked for a few moments to speak on what Sullivan had said.

“Mr. Sullivan has raised valid issues and concerns,” Trakas said. “We have not been provided with full and complete data and information regarding finances concerning the Zoo District and Zoo Association. Supports of this proposition have raised and are spending hundreds of thousands of dollars, if not more, on marketing campaign behind the proposition – all with the expectation of seeing it passed.”

Trakas said he believes it is the council’s responsibility to make sure that the St. Louis County voters are informed on all issues concerning Prop Z. He asked that representatives of the Zoo District and Zoo Association attend next week’s meeting to respond to the issues and concerns that Sullivan brought forward so that the public can hear what they have to say.

Erby said that she agreed with Trakas and has already contacted someone to come speak, but has not gotten a response. She wanted to also make sure that the rest of the council members were in agreement with having a representative come to speak about the proposal.

Erby also acknowledged that if sales taxes like with Prop P and the zoo keep increasing the way that they are, the employees that came forward at the meeting are not going to get any kind of raise.

Councilman Harder requested to ask County Executive Steve Stenger about the 2019 budget. “We haven’t seen the new budget yet,” Harder said. “And it’s supposed to come out after Nov. 1st. I was wondering, is there any plans in that budget for any pay raises?”

Stenger said that the budget is being worked on, but there is not an exact percentage that has been decided.

“We want to put our heads together and figure out a way forward so that we can try to accomplish exactly what you are talking about,” Stenger said. “It’s a decision that needs to be made together. Ultimately you all have to either adopt and approve the budget or modify it, so I think we should get together ahead of time and talk about that.”

Stenger acknowledged that the county council value their employees and want to obtain and attract the very best. He said that he knows that they put in a lot of hours of work each day. He said that the council members would not have taken on the position that they are in if they did not care about the county and its workers and residents. He also shared that the process is not just a simple matter of workers coming and asking for a raise.

“It’s really an executive branch and a legislative branch, coordinating and cooperating,” Stenger said. “I think we really need to come together. It’s going to come down to where our priorities are, what we are able to move, able to cut and how we’re able to achieve it.”

Before the meeting ended, Harder shared that a paper was going around for the council members to write down what their top five goals are for the budget meeting so that when they meet, they can work and focus on the matters at hand.

Councilwoman Walton Gray also explained that she is working on an oversight civilian review board. She said that it is not a solution, but to address the problem. The bill was on the agenda for the meeting, but Walton Gray said that there are still questions and other matters that need to be discussed before the bill is perfected for final passage.

Next week’s meeting has been scheduled for an earlier time. The council will be meeting at 4 pm on Tuesday, Oct. 23rd.