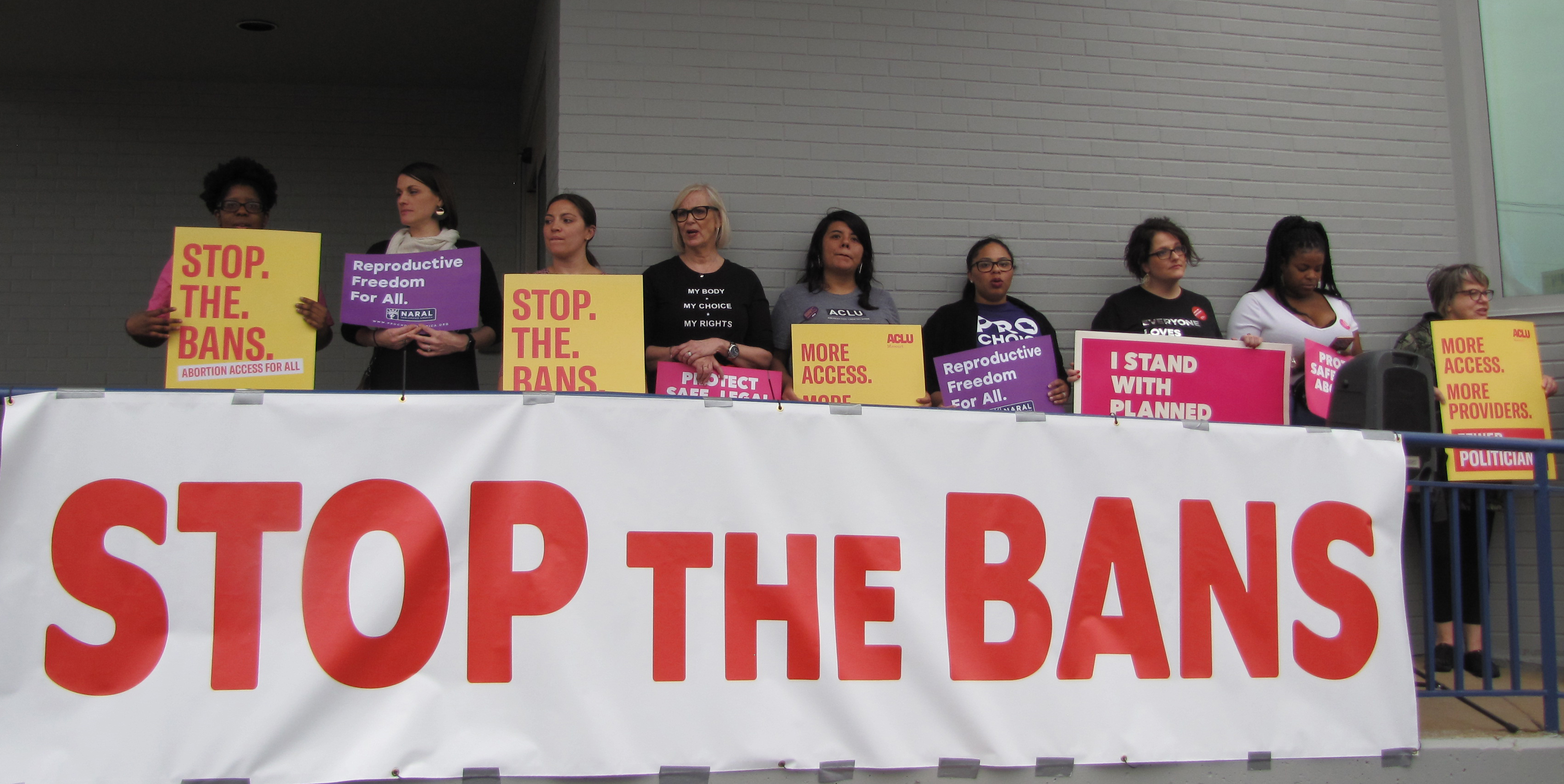 Coalition partners including ACLU of Missouri, Gateway Women’s Access Fund, Hope Clinic for Women, NARAL Pro-Choice Missouri, National Council of Jewish-Women-St. Louis, Planned Parenthood Advocates in Missouri, and ProgressWomen rallied together with community members to fight back against the political attacks on access to safe, legal abortions in the state of Missouri.

Two bills, HB 126 and SB 279, are making their way through legislation. Referring to the bills as “unconstitutional and dangerous,” #StopTheBans coalition shared that the only objective of the bills is to bring the state to the “forefront of [the] political race to overturn Roe V. Wade and criminalize abortion.”

Several women were featured at the rally to share their abortion stories, as well as health providers who discussed the medical necessity of having access to reproductive care.

“I know you all are here because you’re mad, you’re frustrated, you’re angry, and you’re doing something about it,” Daniela Velázquez, ACLU of Missouri, said. “Your voice, our voices need to be heard more than ever before.”

“We have a message for Missouri, and it’s very simple: Not on our watch,” Sara Baker, ACLU of Missouri, said. “We will not ban abortion at six weeks before most women know they are pregnant or could receive an abortion…This is not about the health and safety of women, this is about the control of women.”

“I remember saying to [my husband], I think I can survive her diagnosis and survive an abortion, but if I have to labor to a still-born child, or watch my daughter die, I think I will die too,” Jeni Box shared about why she and her family made the decision to have an abortion. “We knew what we had to do to save our family, to save me, and most of all to save our daughter from a life of endless suffering and endless medical intervention…I believe whole-heartedly that my abortion was the greatest act of love I could have ever shown my daughter…Let me be clear, to the people in the back, I support any person in the state of Missouri who wants to end their pregnancy for any reason.”

“Not having access to the full spectrum of reproductive health care, which includes abortion access, takes power, freedom, and control from anyone and everyone who has the ability to get pregnant. Abortion is health care and it should be treated as such,” Michele Landeau, Gateway Women’s Access Fund, said. “Laws that limit abortion access do nothing but harm our communities. People from all walks of life, all races, all religion, and all political parties seek abortion access.”

“I’m sickened by the way in which Missouri marginalizes women’s reproductive rights more than almost any other state,” Bonnie Edwards said as she shared her story. “My experience with abortion was amazing. I even have post-abortion pictures, and the glow and feeling of liberation I felt was remarkable and it was worth it.”

“All I would hope for all of you to do is keep thanking every abortion provider you’ve ever met. Their jobs are hard and they are still out there, still mentoring students to take their place one day,” Samantha Lund, a med student at Washington University, said. “Hopefully we will all be there when our patients need us.”

“I have had a very long history of reproductive health issues…I don’t even know that I could carry a baby to term, and I don’t ever want to find out,” Kat Kissick said. “Luck is not a word that should be used in this conversation. Luck has no business here just like the GOP has no business in my uterus.”

“I didn’t expect to be pregnant at 19. I didn’t expect to go through this,” Brianna Winkleman said. “My mom said, ‘If you get an abortion, I will kick you out of the house.’ Five months down the line, I was kicked out for being pregnant and placed into a homeless shelter for pregnant women.”

“I sought out Planned Parenthood for help and support and they gave it to me,” Winkleman said.

“Abortion is health care. Abortion is common. And believe it or not, abortion is moral,” Dr. Colleen McNicholas said.

Thursday’s rally continued the coalition’s “Repro Week of Action,” which focuses on bringing Missourians together to push back on HB 126 and SB 279.