Updating the players in the Greitens investigation 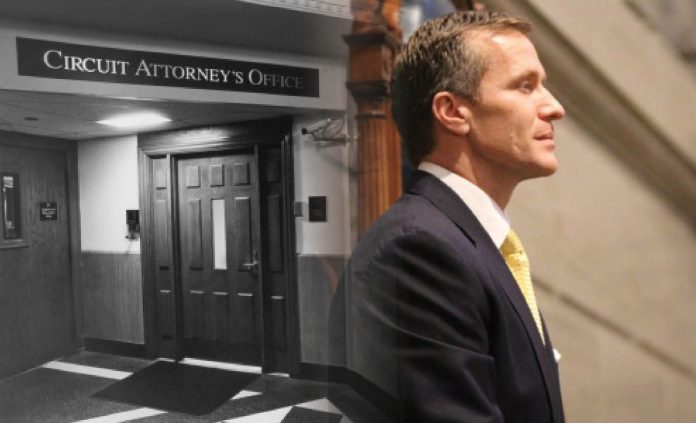 As the varying criminal investigations continue and the path toward the Governor’s May trial unfolds, many of the players are the same from our initial update for a few weeks ago. However, as the investigations have moved forward, several other players have been brought into prominent roles. So we have an update for those following the cases.

The key holdovers from the last update:

Mark Bobak – Still the chairman of the board of the enormous Greitens criminal defense team. He is literally creating more jobs in Clayton than Centene. Could be one of only a couple of people who could make the case to Eric Greitens that it’s in his interests that it’s time to step aside.

Ed Dowd – The head criminal defense lawyer and the self-proclaimed leader behind the non-partisan court plan has gone all in for the Governor. From personally attacking Circuit Attorney Kim Gardner to filing a blizzard of motions, most of them for public relations purposes, he has been all for the Governor all the time. That fat dark money legal defense fund will probably need some extra zeroes by the time it’s over.

Kim Gardner – She has been double tough taking on the literal army of Greitens’ criminal defense lawyers. Even the personal attacks on her by Ed Dowd has not seemed to faze her thus far. She is in the hottest of hot seats and everyone will be watching. On an aside, it is remarkable that she is the one person who has gotten Eric Greitens to stop attacking Republicans and attack a Democrat.

Jay Barnes – The Greitens team is arguing that the trial should be complete before the investigating committee he chairs can release their report. The true key will be if he caves and gives Greitens special terms for his testimony to the committee. The safe bet is no way. It’s remarkable that in this very challenging role, he has been universally praised from all sides.

Josh Hawley – I know, I know… the Confide investigation was a dumpster fire. However, every indication is that he is taking his investigation into The Mission Continues scandal very seriously. From the looks of things, either Greitens’ assistant falls on a sword, or Hawley balks are the only way new revelations in the case are not uncovered.

Todd Richardson – In the toughest position in the state….again. The most honorable man in the history of state government will have the largest say on what the committee finds, and the state is very fortunate to have him in that critical office at this critical time.

Scott Rosenblum – Just candidly you will notice that people like myself and Eric Greitens refrain from every uttering a negative word about the state’s most prominent criminal defense lawyer.
He should have been the first call the Governor made, word inside Greitensland is that it was the Governor’s ego, no surprise here, as the reason Rosenblum wasn’t called first. He didn’t want to look like a criminal. The number is 314-862-4332 for anyone not looking to make the same mistake.

Susan McGraugh – So the first defense of the Governor was that it is actually legal to take naked pictures women without their consent. Obviously, they needed a woman to make that argument, so they hired a professor from SLU, Mrs. McGraugh. As it just so happens her husband is an St. Louis judge and she is looking to become a judge herself, and shock of all shock, Mr. Dowd has kinsfolk on the committee that picks the panel of judges. If after publicly saying that women can be photographed naked without their consent her appointment to the bench could mean the end of the court plan regardless of any deal. If your SLU, it’s no surprise that you might have issues with how women are treated on campus when you have professors openly stating these perverted views.

Todd Graves – He is representing the staff. Look, Todd Graves is a good guy, a good Republican, and an outstanding businessman. However, it’s unfair to put a poor staffer in the spot of having his lawyer representing both the staffer and the Governor. Just another of the spots Greitens seems content to put others in for his actions.

Catherine Hanaway – The first woman to ever be Speaker of the House is representing a few of the Governor’s campaign employees. She would be the attorney to be the most likely to look out for the staffers over the Governor. However, it gets hard to jive her reputation as a defender of women and being part of a legal team claiming it’s legal to photograph naked women without their consent. Just another of the terrible spots Greitens seems content to put others in for his actions.

Sean Droke – He is the chairman of the committee raising money from secret dark money donors to pay the Governor’s lawyers. By all accounts a nice guy from the Bootheel who is trying to be loyal to a cause that ended up not being what he signed on for.

Ron Weiser – Yes, it struck me as odd, too, when a guy from Michigan was on the committee to raise money for the Governor of Missouri’s legal defense fund. As it turns out, the Michigan big wig raises big time money and has put in hundreds of thousands of dollars to Greitens in the past. It has always struck some Missourians as odd that people from all these different states care so deeply about who the Governor of Missouri is. Looks like the carpetbaggers are raising money to stay.

JudgeRex Burlison – Up to this week, the judge in the case was beginning to look more like an employee of Dowd Bennett than the State of Missouri. However, it appears the judge has grown tired of seeing motions filed in his court being only subtle press releases. He set a very aggressive trial date in May and stuck to his original decision. He is in a very tough spot regardless, but his ties to Dowd Bennett are thicker than wrists on a pull-up bar.

Spencer Kympton – Speaking of The Mission Continues, the head of the charity has laid the hammer down, stating that they never authorized any release of their donor list which Eric Greitens campaign raised millions from. Bottom line is that if Kympton says the charity didn’t authorize the taking of the list, then Crystal Taylor has to have taken it without permission or she was told to by Eric Greitens. His letter to The Mission Continues donors was a turning point in the entire scandal.

Rob Vescovo – The House Majority Floor Leader came in on a platform of toughness. Some wondered whether it would be weak chest thumping toughness directed against a super minority of a few dozen Democrats. Well, the first half of session down and it’s clear he is just tough. Rep. Vescovo has had the best first half of session of anyone in the General Assembly thus far and will have a big voice in judging the report the investigative committee releases.

Mark Whitman – Here is an interesting new wrinkle in the drama. Mark Whitman is in federal prison for embezzlement from the Greitens Group. Now the Greitens Group is the account that Eric Greitens took money for speeches talking about the work he did for The Mission Continues. You have to wonder what Mr. Whitman has to say about his interactions with the Governor. Will be a little odd sending restitution checks to the Governor’s Mansion.

Ron Richard – It’s an interesting time for the Senate Leader. He has been a prime target of the Governor’s mockery and attacks but has done the Governor a real favor and called for a pause in his behavior.

Ann Wagner – No one’s star has risen farther faster amongst Missouri Republicans than Ann Wagner. The passage of her anti-sex-trafficking bill is a capstone one month where it came out that the Governor was attempting to get her to endorsement to stay in office as his scandals have become deeper. It only shows that a party badly in need of women to highlight has a start that is being courted by everyone in the party for her endorsement and support.

Cole County Prosecutor Mark Richardson – If the ethics commission ever gets a quorum, and if they are not complete DESE style stooges, the ethics complaint that the Governor lied on his previous affidavit he signed in that case could fall to him. He is known for being very fair, very unpolitical, and a very straight shooting prosecutor. That reputation may very well be put to the test.

5,296 thoughts on “Updating the players in the Greitens investigation”