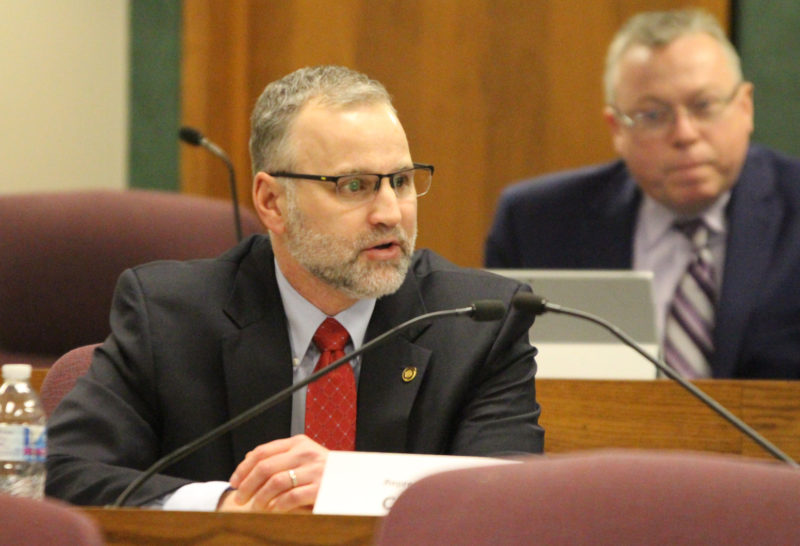 JEFFERSON CITY, Mo. – It’s been a long six months for Rep. Kevin Corlew and the members of the Missouri 21st Century Transportation System Task Force, but there’s a light at the end of the tunnel.

Since June 28, the task force has been meeting to identify ways in which the state’s transportation system could be improved. During that time, they’ve held seven public hearings and three working sessions across the state, getting input from the public and various stakeholders to assess the state roads and determine how best to obtain the funding needed to sustain the state’s highway infrastructure.

On Tuesday, Dec. 19, the task force met for what could be its final meeting. The 23-member panel gathered in the State Capitol to review a proposed working draft of the final report, 60 pages identifying the current level of that state’s system and where the state needs to go next.

Several key components were identified as necessary to develop the funding needed to provide the service and money to sustain or improve the current roads and bridges, namely a 10 cent increase of the fuel tax and a 12 cent tax increase for diesel fuel. Corlew said it could add up to $4 billion in funding over the next decade.

“Those amounts would raise about $430 million annually,” he said. “So over 10 years, you’re talking about an investment by the highway users of this state and those coming through, it’s more than $4 billion toward transportation.”

The task force also seemed to put their support behind a primary seat belt law, saying it was also their duty to put safety first.

“To reduce fatalities on our roads, we first should have a stronger no texting while driving law, distracted driving legislation, and a primary seat belt law making sure that Missouri citizens are buckling up,” Corlew said.

After going through the report, a process that lasted nearly three hours, the committee gave their approval to continue moving forward with the draft and prepare the final report.

Corlew says he expects the report to be completed within the next week, after which the report will be issued to the General Assembly to take action upon during the next legislative session.

“We have the backing of Missouri citizens, and the recommendations we’re making are significantly different from those attempted in 2014, and I think that the task force and Missouri’s citizens recognize that. I’m confident that my legislative colleagues will be able to see the need and to work with us,” Corlew said following the meeting. He said he has had good conversations with his fellow lawmakers, and that they’re all hearing the demand from their constituents.

“We’re going to work together to find the solutions,” he said.

Though the task force’s final official mission is to produce the report, it is technically in existence through the next year.

“We don’t have any specific plans to reconvene, but if the need arises down the road for us to weigh in and give some input on the transportation issues next year, and some of these recommendations, we’re still formed for that,” Corlew said.