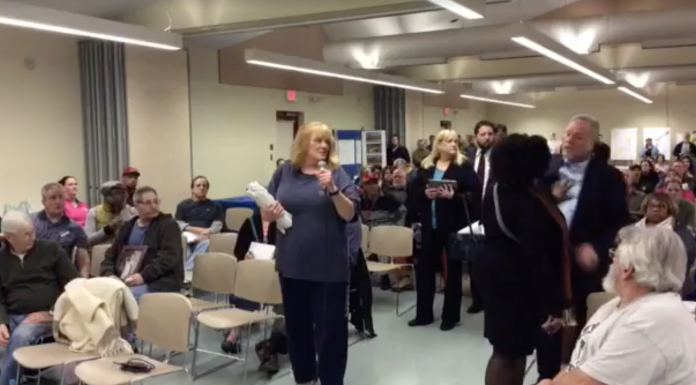 The man, identified as Carl Chapell, a Coldwater Creek area resident, is legally blind and lost both his son and father to radiation-related illnesses attributed to Coldwater Creek radiation.

The alleged shove can be seen at 1:42:40 in the Facebook live stream of the video. It is the second incident between Chapell and Chappelle-Nadal.

But that incident was the second interaction between Chappelle-Nadal and Chapell. The first came when the Senator was speaking on the mic and the local man walked up to her.

Chappelle-Nadal believes that choosing to only look at the latter interaction does not give an accurate representation of events. She maintains she was acting in response the Chapell’s actions.

“And no one, no one has the right to touch anyone without their consent nor tell them to shut up when you have the first amendment right to speak. No one,” Chappelle-Nadal said.

The Coldwater Creek – Just the Facts group, around since 2011, was present at the meeting and was appalled at Chapelle-Nadal’s behavior.

“I find it interesting that Ms. Chappelle-Nadal supports her first amendment right to berate public officials and senior citizens, but not her constituents’ first amendment rights to respond,” said Kim Visintine, one of the founding members of Facts. “She also finds it acceptable to assault an elderly man that simply tapped her on the shoulder in order to get her attention.  When did our government representatives become a ruling class? This Senator can’t get out  of the way of her own ego and is definitely not working in the best interests of the people of North County.”

The actual shoving of the elderly man is disputed by Chappelle-Nadal. While the angle of the video gives perception of a shove and a witnesses attest to that, Chappelle-Nadal said there was no shove and that she said she has several witnesses willing to go on record to that.

“I realize people have a hard time distinguishing between Coldwater Creek and the West Lake Landfill,” said Visintine. “Maria has been much more active on the latter and her style probably fits that effort much more than the way we handle things as they relate to Coldwater Creek. Given the fact that she is verbally assaulting our government health advocates and physically assaulting our legally blind, senior citizen, lifelong residents. Thanks, but no thanks, we don’t need that kind of ‘help.’”

Visintine adds that public meetings held by both the Army Corps of Engineers and CDC are voluntary, and if federal agencies fear for the safety of their employees, they are well within their scope to cancel future meetings. Chappelle-Nadal’s antics may be the catalyst to shut down communications between the community and federal officials, permanently silencing the voice of current residents in the Creek area.

Facts have done surveys in the area and compiled a website with their studies trying to differentiate their health issues from West Lake Landfill activists who try to tie the areas, 7 miles apart, together. West Lake Landfill is in the opposite direction of the Coldwater Creek windfall and watershed.

“We originated as a group of North County neighborhood kids and high school friends, mainly from McCluer North High School, reconnecting on Facebook in 2011,” Coldwater Creek Facts’ site, coldwatercreekfacts.com, states. “We noticed many of our friends, our loved ones, ourselves and some of our children were being diagnosed with unusual cancers, autoimmune diseases, birth defects and other disorders. We began this group with around 20 of us North County natives, asking each other ‘why.’ We had no idea radioactive nuclear weapons waste existed in our community. The majority of us are in our late 30’s/mid 40’s. We grew up in North County St. Louis in the 60s, 70s and 80s (during what is assumed to be the height of the contamination). We all have rare radiation-linked cancers/disease in our immediate families (our siblings, ourselves, our parents or our children).”

The Just the Facts group includes a variety of those from the area, ranging from engineers and nurses, like Visintine, to corporate accountants.

Visintine said that the Army Corps of Engineers FUSRAP team and CDC have confirmed that there is no current exposure risk to residents from inhalation of contamination. The illnesses captured in their health survey depicts exposure that occurred decades ago, before cleanup began.

Visintine, who lost a son who was born with a brain tumor when he was 6 years old, shared that the group does not want a buyout, a bill hotly debated in the House and Senate in 2017, but wants the area cleaned up because the houses are their homes. The bill was sponsored by Chappelle-Nadal and Rep. Mark Matthiesen.

“He is advocating to destroy our hometown,” Visintine said. “He’s doing a huge disservice to the whole North County service area. There’s typically not funds for demolition. They abandon and leave the residents around the area – and now you’re going to leave these abandoned homes in an already struggling area?”

Matthiesen has not filed the buyout bill this year, but has filed the Radioactive Waste Investigative Fund.

Visintine said, in addition to clean up, she would love to see the area receive grants to host screening centers to identify cancers earlier and educate healthcare providers and residents in the area.

“Instead of decimating our town, we’re trying to clean it up and breathe new life into it, for the residents that live there today,” Visintine said.

Coldwater Creek has a long history, going back to World War II, when the nuclear bombs were built. Approximately 121,000 tons of radioactive nuclear weapons waste material was dumped near the head of Coldwater Creek, which was developed into a residential area years later.

The area received green lights in the 70s to begin clean up. In 1990, more clean up occurred and is ongoing.

“All these cancers that are being expressed now are from running through the creek and living in the area as kids, prior to the commencement of cleanup activities,” Visintine said.