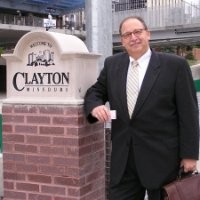 After 16 years, Clayton Alderman Alex Berger III has two more board meetings to attend. His last day at City Hall is April 24 when he officially leaves a post that has always provided plenty of work and opportunities to meet a variety of people.

As he prepares to leave office in 2018, Berger, who did not seek re-election this year, said he believes he has accomplished the goals he set forth to achieve when he was first elected in 2002.

Berger, a 55-year resident of the city of Clayton, has a Master’s Degree in Public Administration and currently serves as a partner with ProActive Leadership Consultants. The opportunity to run for office came as a result of current Mayor Harold Sanger’s Ward 3 seat being termed out. He had served on a couple of boards prior to running for election and said, “I just wanted to do it, I wanted to be part of what this thing is.”

The Clayton Times recently caught up with Berger ahead of his final days in office to discuss his tenure in City Hall, what he’ll be doing in his spare time and what he loves most about Clayton.

Clayton Times: What do you plan on doing once you’re out of office?

Berger: I have three things that I’m totally involved in. The first is the Clayton Education Foundation, which is a foundation that finds donations to support education programs in our school district for our kids. I’m very excited to be the president of that organization. I am the president of the board of trustees at Wilson School, also an asset of our community. And finally, I’m on the Art Fair Board, looking forward to the 25th anniversary.

Clayton Times: What are some of the things you’re most proud of accomplishing while in office?

Berger: First and foremost, the fact that we have delivered a budget to provide the service necessary to meet the expectations of our citizens. Finding the ways to apply monies, whether it’s a capital project or adding people. When the meltdown came we began a process of pulling back, and I’m really pleased to say that our Board of Aldermen supported changing focus.

Accessibility has been one of my preferences. How do we make sure that people of all abilities and agilities have access to our community? I was most proud when our city was awarded the STL Accessibility Award by the Para-Quad Organization for the things that we did to qualify for that recognition. I also advocated for non-smoking in our parks. I did not want our youth teams to be around people smoking because it just didn’t make sense to me.

The other projects that I’ve been involved in have been associated with capital projects and the projects necessary to deliver services for our community, and we’re very fortunate. I’ve been here since 1953, my parents voted for the bond issue on the Shaw Park Ice Rink when it first came about. So here we are with an asset. The swimming pool next to it is one of the most glorious assets, and so when I was on the Parks and Recreation we started a plan to ensure that we offered the services necessary to continue to have that as an asset.

Clayton Times: What was the toughest decision you had to make while in office?

Berger: The toughest decision is to vote against some things that I just felt at the time didn’t make any sense to me. I’m not saying I was wrong or I wasn’t proud of it but when you’re in the room with these other six individuals and you have a level of candor, it is an amazing feeling, because we come from different wards with different pressures. Sometimes you have to disappoint those that you trust and say, ‘I can’t go with this’. Whether it’s the budget, whether it’s a development, that’s just the way it is. But because Clayton is Clayton, it’s cool and people get passed it.

Clayton Times: What has it been like to work with the current administration?

Berger: The current aldermen we have have been absolutely fabulous and I underline the word fabulous. The mayor has been absolutely terrific. I’ve had a chance to work with four mayors and he is absolutely terrific externally and internally, whether it’s in the chamber or in the executive room when we’re talking about things. He’s inclusive, he’s candid, he’s engaging.

One other comment: we have the best city manager and the best city staff of anybody in the metropolitan area. Period. The end. That makes it really terrific because we can debate, and their cool to debate, and we don’t have a separation, we’re a unit. I think that’s the beauty of Clayton.

Clayton Times: Do you plan on running for office again in the future?

Berger: No. Absolutely not. I’m done. I want to support good people in the offices. I’ll campaign for them but I don’t want to (run again). I’m really focused on the Clayton Education Foundation and the Wilson School.

Clayton Times: What’s your favorite thing to do in Clayton?

Berger: Everybody that knows me knows that we’re at restaurants, my wife and I, almost every weekend both nights. So that’s what we do. We’re very lucky to have great restauranteurs, we have a lot of those.

The other thing that I really, really enjoy is the Center of Clayton. I go every morning, I start at City Coffee with a group of curmudgeons. Just seeing people enjoying, smiling and talking about whatever they’ve got — that’s fun because that’s what our community is all about.